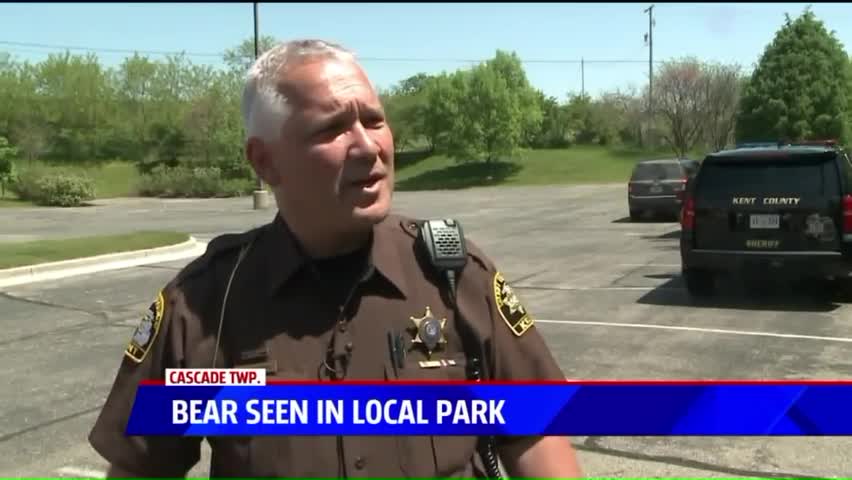 CASCADE TOWNSHIP, Mich. — A black bear that has been spotted in the area showed up live during a news cast.

Doug Reardon, a reporter for FOX 17 in Grand Rapids, Michigan, was reporting live when the bear was spotted behind him.

The Kent County Sheriff's Department responded to the area Monday. Deputies saw the bear near a business and it ran into a wooded valley.

"That bear really doesn't want to be here any more than people really want to bump into a bear," said Michigan Department of Natural Resources wildlife biologist Nick Kalejs.

Kalejs says it's not uncommon to see bears in heavily populated areas, and they're usually harmless. However, that doesn't mean you can let your guard down.

"[The] biggest issue with these types of situations, it's a little bit of crowd control. Just stay back, keep things quiet, give him a chance to just move on out to a little less disturbed and less populated area."

The black bear sighting in Kent County comes just days after another bear was spotted in Ionia abotu 10 miles away. The DNR says they don't know if it's the same animal.

The DNR says it's best to steer clear of the animals if you see them.
For more stories about pets and animals, click here.

More from AOL.com:
Bakery owner says customer canceled cake order after finding out she was Muslim
The fastest growing cities in America are in Texas
Michigan Uber driver interrupts hearing on murder charges