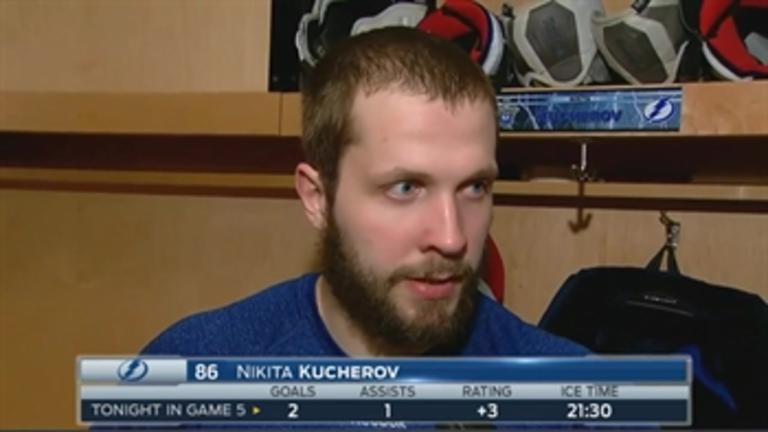 (The Sports Xchange) - Tyler Johnson deflected Jason Garrison's wrist shot from the left circle into the net 53 seconds into overtime and the Tampa Bay Lightning seized control by beating the Pittsburgh Penguins 4-3 in Game 5 of the Eastern Conference finals on Sunday.

Nikita Kucherov led a comeback from a two-goal deficit with two goals as the Lightning won for the second time in the three games in Pittsburgh. They will not have to return there if they can win Game 6 on Tuesday in Tampa, where teams split Games 3-4.

The Lighting are one win away from the Stanley Cup finals for the second straight season.

The Penguins gambled by returning goaltender Marc-Andre Fleury to the net for the first time in 51 days, benching rookie Matt Murray, but Fleury was outplayed by rookie Andrei Vasilevisky, who made 31 saves to Fleury's 23.

Fleury now is 1-8 in his last nine playoff starts.

One constant on every Tampa Bay goal: Penguins defenseman Kris Letang, playing without usual partner Trevor Daley, was on the ice. Daley will miss the rest of the playoffs with a broken left ankle that occurred in Game 4.

Olli Maatta, back after being benched for three games for uneven play, figured on two of the Penguins' first three goals -- exactly what coach Mike Sullivan wanted upon returning him to the lineup.

But, again, the Penguins' big names, Sidney Crosby and Evgeni Malkin, could not produce a goal in a Game 5 that, based on prior NHL results of series tied at 2, sends the winner on to the next round about 75 percent of the time.

The Penguins led 3-2 late in the third, but Kucherov scored his second of the game -- and 11th of the playoffs -- at 16:44. Johnson's shot from the left point deflected to Kucherov behind the net, and he easily beat Fleury on a wraparound.

The Penguins took their 3-2 lead by scoring in the final minute of each of the first two periods -- literally the final second of the first period -- with left winger Chris Kunitz involved in both goals.

After the Lightning rallied from a two-goal deficit to tie it at 2-2 on goals 1:10 apart in the second by Alex Killorn and Kucherov, the Penguins regained the lead when Kunitz punched the puck past Vasilevskiy with 50 seconds left in the period.

Maatta swiftly carried the puck beyond the goal line, then fed it to the high slot to Malkin, who put it on net. Just as Vasilevskiy seemed ready to grab it, Kunitz nudged it into the net for his fourth of the playoffs and third of the series.

Previously, after holding the Lightning to four shots in the first period, the Penguins scored the game's first goal with only seven-tenths of a second left.

Kunitz, while falling down, shoved the puck up-ice to Bryan Rust, who beat defenseman Victor Hedman for a shot that rebounded to defenseman Brian Dumoulin, who put it inside the far post.

Pittsburgh made it 2-0 only 1:30 into the second. Carl Hagelin shifted to the right of Vasilevskiy to deflect Maatta's pass to Patric Hornqvist for his seventh of the playoffs.

But after Phil Kessel missed a chance to put the Penguins up 3-0, Killorn's wrist shot from the left circle eluded Fleury at 13:15 for his fifth goal. Kucherov followed 1:10 later with his 10th of the playoffs, a one-timer from the left circle created by Vladimir Namestnikov's pass.