14 million at risk as thunderstorms threaten plains, midwest and south 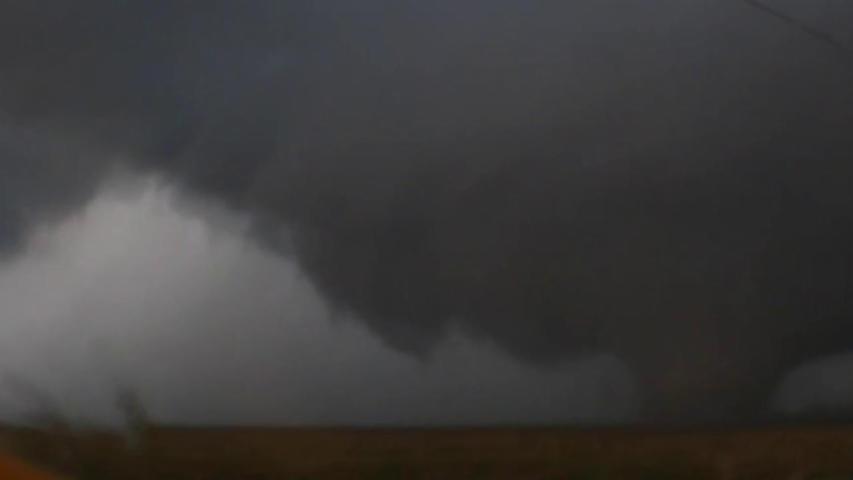 Some 14 million Americans were facing violent thunderstorms Monday — with high-winds, large hail and tornadoes possible across a vast area from Lake Superior to the Mexican border.

The threat comes after at least 27 twisters were reported across Texas, Kansas and South Dakota on Sunday, according to the National Weather Service.

Most of these touched down in rural areas, although building damage was reported in Trip County, South Dakota, and a "large tornado" took down a quarter mile of power lines in Ochiltree Country, Texas, the NWS added.

There were also at least 86 reports of large hail in those states as well as in Nebraska. The largest ice balls were some 3 inches in diameter — the size of a tea cup — and were recorded in Howard County, Texas.

Two seperate large hailstones from the storms that passed over Deerfield today. #kswxpic.twitter.com/M2trwASgjG

There was also scattered flash flooding, with water as high as 1.5 feet leaving roads impassible in Valentine, Nebraska, The Weather Channel reported.

The severe weather started late Saturday and there was no sign of any let up as the new week began. Severe thunderstorms were possible across a 1,300-mile area across the country's midsection, according to The Weather Channel. The affected area stretched from Minnesota and Wisconsin, through parts of South Dakota, Nebraska, Iowa, Kansas, Missouri, Oklahoma and down into most of Texas.

"The biggest tornado threat today will come in largely rural areas and low population centers," Weather Channel senior meteorologist Kevin Roth told NBC News early Monday. He said if twisters came they would like emerge in parts of Texas and Kansas — the other areas would like see hail and high winds.

The NWS issued a severe weather statement for parts of Oklahoma, warning of golf-ball-sized hail and winds of up to 60 mph.

"People and animals outdoors will be injured. Expect hail damage to roofs, siding, windows and vehicles ... and trees," the NWS said, adding "for your protection, move to an interior room on the lowest floor of a building."

On Tuesday, the severe-threat area was set to focus on northern Texas, Oklahoma, Kansas, and parts of Nebraska, Iowa and Missouri, before expanding slightly into Illinois on Wednesday.

"It's a large area but it's a stalled front that's not going to move much," Roth added. "It's going to be a repeated threat this week, possibly into Thursday and even into Friday."