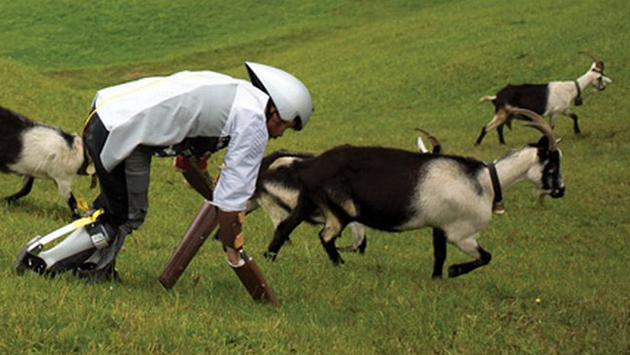 Last year, Thomas Thwaites decided to take a break from being a human and escape all his worries by transforming himself into a goat and spending his days grazing in the Alps.

In his book, "GoatMan: How I Took a Holiday from Being Human," Thwaites describes his days with the goats grazing in the Alps with a herd of goats.

Goats, like other livestock, graze for about seven to 12 hours a day. During that time, goats use an organ called a rumen that is filled with microorganisms that help them break down all that grass into edible sugars.

Unfortunately for Thwaites, humans don't have this organ. To get around this problem, he considered a variety of options: Swallow a microbial mixture that would mimic the rumen and help him digest the grass? That option, he was told, could be dangerous; who knew what kind of bugs live in a goat's rumen that could potentially be harmful to a person? What about using a chemical enzyme that would break down the grass? He was told this option could be unsafe too.

So in the end, Thwaites built himself a pouch. The pouch collected the grass he grazed on all day.

"I kind of quickly learned which patches of grass were kind of tasty and which were a bit kind of bitter," Thwaites told Business Insider. "It was just a nice experience walking around with a big clump of grass in your teeth and chewing it up."

Then at night, Thwaites used a standard pressure cooker to cook the grass and break it down into a kind of "grass-stewy soup."

Before drinking the concoction, he used a chemical test that confirmed the greens had been broken down into sugar.

As much as technological advancements aided Thwaites' adventure, the shortcomings — especially when it came to food — were fairly disappointing. Thwaites told Business Insider that he'd eventually like to work on building a "kind of artificial rumen," but that'll likely take some time.

See more photos of Thwaites' time as a goat:

NOW WATCH: Humans are defying the law of evolution

More from Business Insider:
I tried a genetics test that told me how I should eat and work out based on my DNA — and it was frighteningly accurate
The rise and fall of Theranos, in one graphic
About 80% of all cities have worse air quality than what's considered healthy — here are the 15 with the worst air pollution