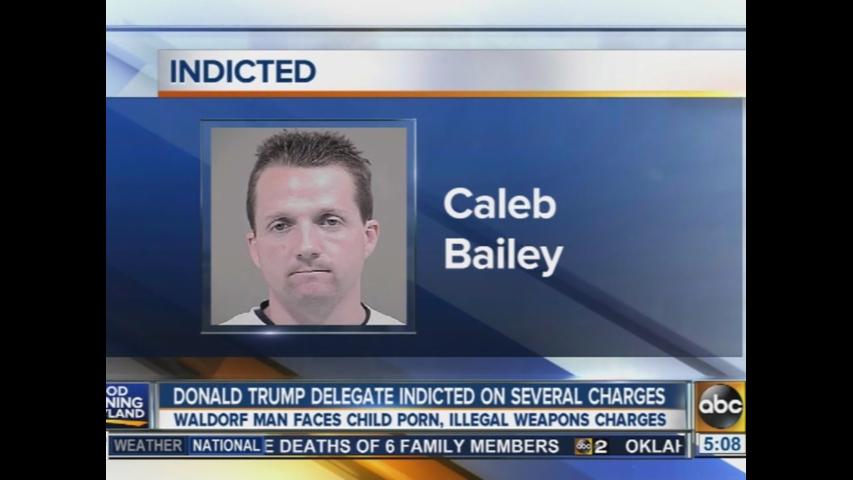 WASHINGTON, May 19 (Reuters) - A Maryland man who is a delegate for Republican presidential candidate Donald Trump has been indicted for illegally shipping explosives, owning a machine gun and producing child pornography, the U.S. Justice Department said on Thursday.

Caleb Bailey, 30, was indicted by a grand jury in U.S. District Court in Greenbelt, Maryland, on Wednesday. He was elected to be a delegate for Trump, the presumptive Republican presidential nominee, and is still listed as one on the state's board of elections website.

Image Courtesy of  University of Miami school of Law

Image courtesy of the Michigan Courts

(Photo via US Government)

Image Courtesy of the Supreme Court of Colorado

House Manager Charles Canady on Capitol Hill January 25.
Justice Joan Larsen of the Michigan Supreme Court and a former clerk for Supreme Court Justice Antonin Scalia speaks at his memorial service at the Mayflower Hotel March 1, 2016 in Washington, DC. Justice Scalia died February 13 while on a hunting trip in Texas. (Photo by Susan Walsh-Pool/Getty Images)
Up Next

Joe Cluster, executive director of the Maryland Republican Party, confirmed Bailey had been indicted and told Reuters the party was asking Bailey to resign from the delegation.

"I don't know too much about him beyond what I've read," said Cluster, who declined to comment further.

Bailey had hundreds of illegal weapons stored in a bunker beneath his garage, including dozens of machine guns, smokeless grenades and gas canisters, along with ready-to-eat meals, according to a law enforcement official briefed on the investigation.

Telephone calls and emails seeking comment from Bailey, from the Trump campaign and from the Maryland board of elections were not returned on Thursday.

Trump has been working to unify the Republican party going into its presidential nominating convention in Cleveland in July.

SEE ALSO: Clinton scoffs at Chris Cuomo's suggestion that the nomination is still up for grabs

In March, a New Hampshire man who co-chaired Trump's veterans coalition in the state was extradited to Nevada to face charges of helping organize the high-profile 2014 armed standoff with federal agents at the ranch of Cliven Bundy.

The four-count indictment against Bailey alleges that he used a minor to "engage in sexually explicit conduct to produce child pornography" and illegally owned a machine gun.

Authorities became aware of Bailey after he tried to ship explosives and ammunition from Maryland to Wisconsin through the U.S. mail in February, said an affidavit filed by a special agent with the Bureau of Alcohol, Tobacco, Firearms and Explosives.

Some of the types of cartridges Bailey was sending to Wisconsin are no longer used by the U.S. military because they are too dangerous, the law enforcement official said, so shipping them was "not only illegal, but posed a significant public risk."

The Wisconsin recipient is under investigation as well, according to the official.

Bailey attempted to ship five such packages in total, but one broke open at the post office, prompting the facility to call law enforcement, according to the affidavit. (Reporting by Julia Harte and Ginger Gibson; Editing by Kevin Drawbaugh and Leslie Adler)