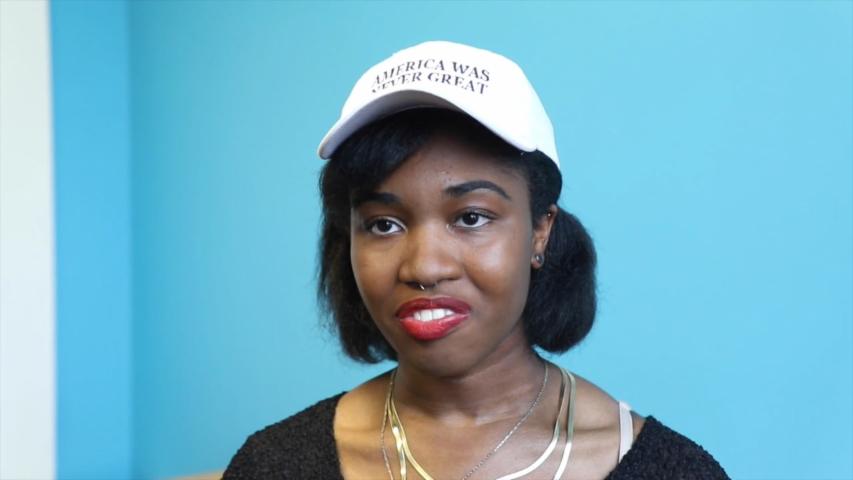 Supporters of Donald Trump's presidential campaign are furious over a Home Depot worker who was spotted wearing a hat critical of the US.

The hat reads "AMERICA WAS NEVER GREAT" — which is a play on Trump's campaign slogan, "Make America great again."

Someone snapped a photo of the employee wearing the hat at a Home Depot in Staten Island, and shared it online.

Hundreds of Trump supporters are now threatening to boycott Home Depot in response.

"This is disgusting," customer Trevor McNulty wrote on Home Depot's Facebook page. "If we do not hear what action was taken against this employee and the manager, I will never step foot in any of their stores again. You've got until Monday HD." The comment has been "liked" 54 times.

Another person wrote, "If this woman is not fired I will never shop at Home Depot again. She represents everything that is wrong with our country!"

Agree this isn’t appropriate & we wouldn’t allow it, but the store team didn’t see it. This doesn’t represent HD’s opinion.

The employee who wore the hat, 22-year-old Krystal Lake, is now getting inundated with death threats, according to the Staten Island Advance.

"The point of the hat was to say America needs changing and improvement," Lake told the Advance. "I don't think it's a positive message to say, "Let's look to the past.'"

She claims that none of her managers reprimanded her for wearing the hat. She also claimed that she's not the only employee sharing a political message in stores. She says she has seen other employees wearing pins supporting Donald Trump.

Home Depot did not immediately respond to our request for comment.

A spokesman for the company told the Advance that the Staten Island store would be "following up with the matter to ensure that it will not happen again."

"We appreciate and understand the concerns of our loyal customers," he said. "In terms of the message, our associates are not permitted to wear items that reflect political statements. Unfortunately, no one on our management team saw her wearing the hat — otherwise, they would have had her remove it immediately."

SEE ALSO: The Target boycott has reached a boiling point — and sales may suffer as a result