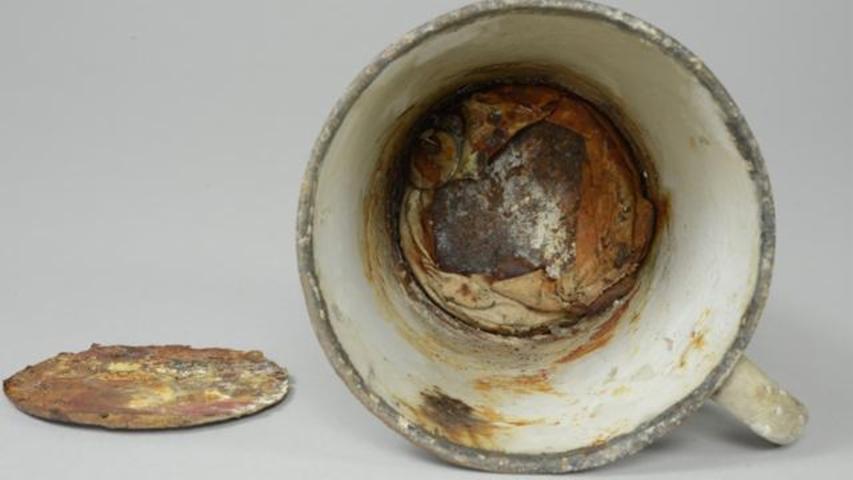 The Auschwitz Museum has gathered over 12,000 pieces of the enameled kitchenware stolen from those sent to Auschwitz-Birkenau, but one recently revealed itself to be more than what it seemed.

A cup in the collection turned out to have a double bottom, and concealed inside the hidden compartment were a gold ring and a necklace.

An analysis of jewelry suggests it was made in Poland between 1921 and 1931.

See photos of the ring:

Auschwitz Museum discovers double bottom cup with a ring hidden inside
Interior shot of the cup, with the bottom removed.

The gold ring found inside.

An analysis of the jewelry suggests it was made in Poland between 1921 and 1931.

An x-ray image of the mug.

Dr. Piotr M. A. Cywiński, the director of the museum, notes that those being deported to camps were often lied to about where they were going and encouraged to pack a bag, only to have their belongings stolen by the Nazis.

Cywiński also comments, "The hiding of valuable items...proves on the one hand to the awareness of the victims...but on the other hand it shows that the Jewish families constantly had a ray of hope that these items will be required for their existence."

Auschwitz Museum discovers double bottom cup with a ring hidden inside
A visitor throws a rose onto a column at the Holocaust memorial in Berlin on January 27, 2016. / AFP / dpa / Kay Nietfeld / Germany OUT (Photo credit should read KAY NIETFELD/AFP/Getty Images)
German Chancellor Angela Merkel (down L) and President Joachim Gauck (2ndL) listen to a Holocaust survivor Ruth Klueger (C) delivering her speech at the international Holocaust Remembrance Day on January 27, 2016 at the German parliament in Berlin. Deputies and guests paid tribute to the victims of the Nazi regime with a minute of silence and a speech to the delegates by Holocaust survivor, American author Ruth Klueger. / AFP / John MACDOUGALL (Photo credit should read JOHN MACDOUGALL/AFP/Getty Images)
Flowers are seen on the concrete columns of the Holocaust memorial during the international Holocaust Remembrance Day in Berlin on January 27, 2016. / AFP / TOBIAS SCHWARZ (Photo credit should read TOBIAS SCHWARZ/AFP/Getty Images)
Up Next