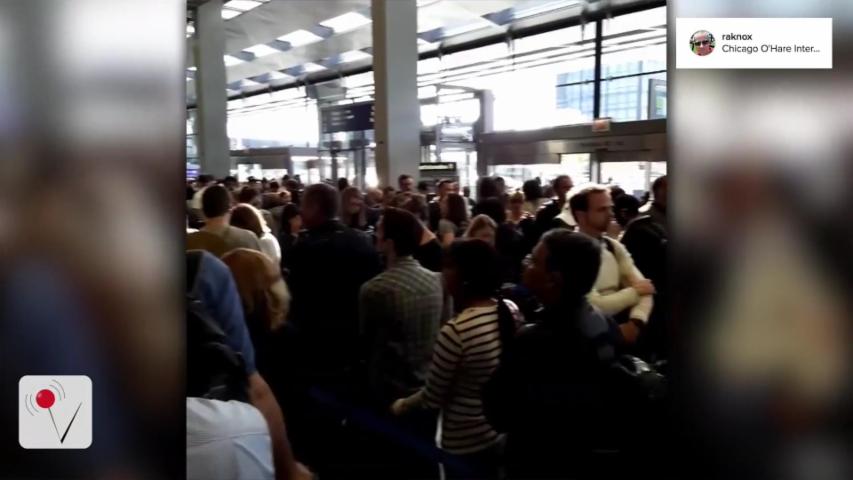 Airlines have had enough of the recent chaos at airports caused by understaffed Transportation Security Administration checkpoints.

American Airlines chief operating officer Robert Isom said executives from all the major US carriers met with the head of the TSA and the Department of Homeland Security last week to air their grievances over the situation.

Isom wrote about the meeting in a letter to employees, dated May 18.

"Two words: TSA lines," Isom wrote in the letter, "Right now those words evoke frustration from all of us, as well as our customers who continue to miss flights due to lines that are literally out the door."

The delays — which American Airlines attributes to severe under-staffing on the part of the TSA — have been growing for months but reached new heights last weekend when passengers at Chicago's O'Hare airport were left stranded after security lines exceeded three hours.

SEE ALSO: The trick that can help you skip long TSA lines

"We all agree that the TSA plays a vital role in protecting the traveling public and we're not in favor of anything that jeopardizes that safety," Isom wrote. "However, tens of thousands of customers have missed their flights and tens of thousands of checked bags have been delayed in TSA resolutions rooms due to low staffing."

"This is unacceptable to all of us, and the federal government can, and should, do better," he added.

In the letter, Isom also said American Airlines will spend $4 million to provide contract staff at TSA checkpoints in the airline's major hubs and gateway cities. These staff members will be used in non-screening functions and crowd management so that trained TSA staff can focus solely on screening and security. The airline already spends $17 million each year to help reduce wait times.

In addition, the airline will help the TSA expand its canine screening program so that more passengers can receive expedited screening.

RELATED: See some of the strangest items confiscated by the TSA:

American will also launch an aggressive program to encourage its customers to sign up for TSA's PreCheck program to reduce the number of people in security lines.

American Airlines joins the Port Authority of New York and New Jersey as well as the Hartsfield Jackson-Atlanta International Airport in their fury over understaffed TSA checkpoints. The two major airport authorities have separately warned the TSA that would bring in private security contractors if the federal agency's performance does not improve.

Two words: TSA lines. Right now those words evoke frustration from all of us, as well as our customers who continue to miss flights due to lines that are literally out the door. Long lines also aren't fair to our team members, who ultimately take the brunt of our customers' frustrations. As we head into the busy summer travel season, I wanted to fill you in on some of our efforts to address the situation.

In early March we led the industry by raising our concerns about the growing length of security lines. We contacted government officials in Washington, and spoke with the media in order to reach the general public. Thanks in part to our efforts, Congress reallocated $34 million in TSA funding last week, which will allow the agency to pay overtime to existing staff and hire an additional 768 screeners by June 15. In order to provide TSA Pre✓ to more customers, the TSA is also relocating 28 canine teams to the 20 busiest airports nationwide, including all of our hubs and gateways.

It's a decent start, but it isn't enough, especially for our customers who are now late for — or missed — their flight. The only viable way to fix these long lines is for TSA to increase their staffing at checkpoints throughout the country. In the meantime, we're doing what we can to help improve the travel experience this summer by committing the following resources to assist our employees and customers:

This isn't just an American Airlines issue; our competitors' hubs also have long lines as well. So much so that last week, the leadership teams of the major U.S. airlines shared their individual frustrations with TSA Administrator Peter Neffenger and Department of Homeland Security (DHS) Secretary Jeh Johnson. It was clear that all of us feel the same way about the effect these lines have on our employees and customers.

We all agree that the TSA plays a vital role in protecting the traveling public and we're not in favor of anything that jeopardizes that safety. However, tens of thousands of customers have missed their flights and tens of thousands of checked bags have been delayed in TSA resolutions rooms due to low staffing. This is unacceptable to all of us, and the federal government can, and should, do better.

Until the lines are fixed and TSA is properly staffed to handle the traffic, our Regulatory, Government Affairs and Corporate Security teams will continue to interact daily with TSA and DHS leadership. Rest assured they are sharing all of our concerns. Thanks for all you are doing to take care of our customers and each other, especially under these circumstances.

NOW WATCH: How To Avoid Long Lines At The Airport

SEE ALSO: Here's everything we know about the EgyptAir jet that crashed