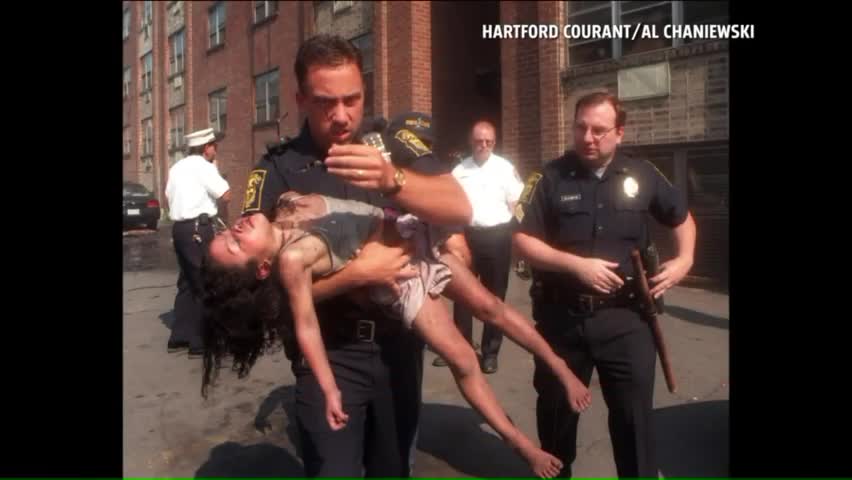 HARTFORD (WTIC) -- A retired Hartford Police detective shares a special bond with a girl he saved 18 years ago.

He was one of many in the crowd cheering on Tuesday night when she graduated from Eastern Connecticut State University.

SEE ALSO: Woman to be deported from UAE for accessing husband's phone without his permission

"He saved me. He's my guardian angel," said Josi Aponte.

In June of 1998, then Hartford Police Detective Peter Getz rescued Aponte from an apartment fire that killed her cousin and nearly took her life.

"The fire was so heavy. [Firefighters] couldn't see. They crawled," said Getz.

Aponte was just 5 years old. She was almost missed by first responders during the aftermath of the fire in an apartment on Washington Street in Hartford. She was in cardiac arrest when firefighters discovered her and handed her to Get, before heading back into the fire themselves.

"We were a block and a half from the hospital. We're not going to wait the 10 minutes for an ambulance to get there," said Getz.

Another officer drove to the hospital, while Getz performed CPR on Aponte in the back seat.

Aponte spent the next month in several different hospitals recovering from third-degree burns and smoke inhalation. Getz visited Aponte and gave her a teddy bear, which she kept all these years.

"It's very special to me," said Aponte. 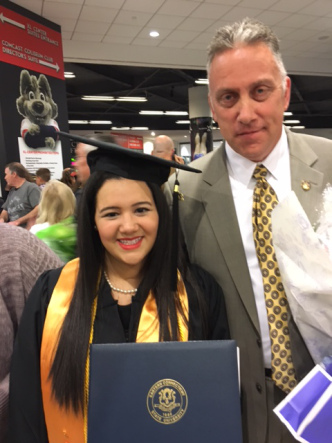 Getz has since retired, but he always kept tabs on how Aponte was doing from afar. Two years ago, she was "googling" herself when she found the photo from the fire. She decided to find Getz and learn what happened that day in 1998.

"I didn't know what happened at all," said Aponte.

The two have kept in touch ever since and on Tuesday night, when she graduated from Eastern Connecticut State University, he was there to wish her well.

Getz said, "Honestly, it gave me a chill to know that such a long time ago we almost lost her and to where she is now."

Aponte graduated with a degree in accounting. She already has a job at an accounting firm and plans to get her master's degree in the future.

More from AOL.com:
NBC/WSJ Poll: Clinton's national lead down to 2 points
On Indian building site, parents tether toddler to rock while they work
My son was cuffed and threatened for trying to sell his MacBook on Craigslist, alleges Daily Beast editor