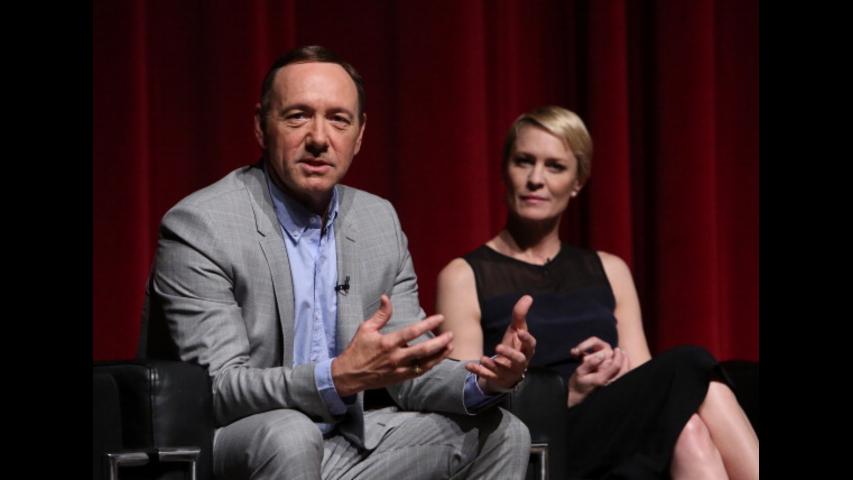 House of Cards' Robin Wright says she recently had to fight for the same pay as her co-star Kevin Spacey.

Addressing the Rockefeller Foundation on Tuesday, Wright said that she threatened to go public if she didn't receive equal pay to Spacey, according to the Huffington Post.

"It was the perfect paradigm," Wright said. "There are very few films or TV shows where the male, the patriarch, and the matriarch are equal. And they are in House of Cards."

Wright plays Claire Underwood to Spacey's Frank Underwood on the Netflix series and also serves as a producer.

"I was looking at the statistics and Claire Underwood's character was more popular than [Frank's] for a period of time. So I capitalized on it. I was like, 'You better pay me or I'm going to go public,'" Wright said. "And they did."

Spacey was reportedly getting paid $9 million for the third season of House of Cards, and according to Forbes, Wright received around $5.5 million that same year. Wright's character had a much larger part in the foreground of season four.

Wright spoke about politics, parenting and equal pay in a hour-long discussion with Judith Rodin, president of The Rockefeller Foundation, who asked Wright about the obstacles she faced as a woman in Hollywood. She is one of many women currently speaking out about the Hollywood pay gap, including Patricia Arquette, Jennifer Lawrence, Amanda Seyfried, Lena Dunham, Charlize Theron, Tracee Ellis Ross and Gillian Anderson.

Check out more from "House of Cards" in the gallery below!

More on AOL Entertainment:
Britney Spears helps you chase the 'American Dream' in new mobile game
Sofia Vergara shares selfie in front of mammogram machine: 'It's that time of the year'
New 'Ghostbusters' trailer shows off more ghosts, including Slimer