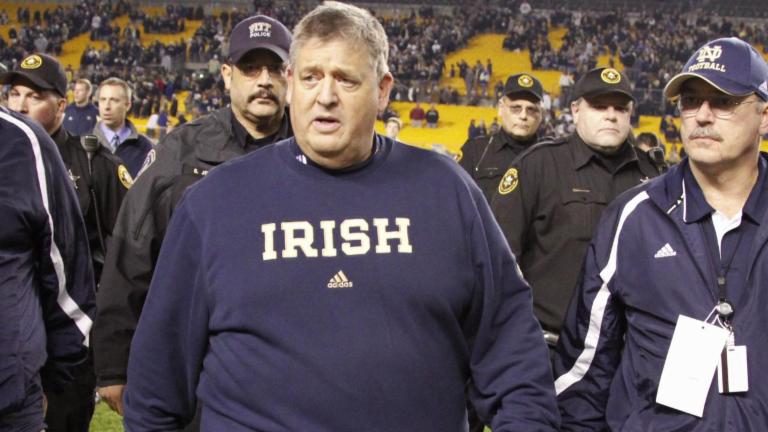 Charlie Weis coached the Notre Dame football team from 2005 to 2009, amassing a record of 35-27 before he was fired and replaced by current Fighting Irish coach Brian Kelly.

But according to federal tax filings released by Notre Dame on Monday, Weis earned $2,054,744 from his former employer over the reporting period of July 2014 through June 2015. That's roughly $430,000 more than Kelly earned from the university during the same period.

SEE MORE: The 20 most famous athletes in the world

What's more, Notre Dame confirmed to USA Today that only two university employees earned more than Weis: vice president and chief investment officer Scott Malpass, who earned close to $5.4 million in total compensation, and Michael Donovan, the university's managing director for private capital investments, who was credited with over $2.3 million in compensation of the same period.

Since Weis was fired in November 2009, he has earned a whopping$16,912,123 from Notre Dame. And because the university has scheduled "additional annual payments" for Weis through the December 2015 pay period, he is owed one final paycheck for his services in South Bend, Indiana. That will put his final buyout sum from Notre Dame at $18,966,867.

SEE MORE: Here's a look into the wonderful life of Stephen Curry

Not bad for a coach who won one bowl game in five seasons with the Irish.

After leaving Notre Dame, Weis bounced around college football and the NFL. He spent one season as the offensive coordinator for the Kansas City Chiefs and a subsequent season as the offensive coordinator at Florida. Most recently, Weis spent three years at the helm of Kansas' football program. During his three years with the Jayhawks, the team went 6-22 (1-18 in Big 12 play).

Weis is now without a job in football. But Notre Dame's recently released tax filings suggest that unemployment, however long it lasts, won't been too tough on him.

One thing to know: Swinney is in line for a big pay day after guiding the Tigers to undefeated regular season and the No. 1 ranking for most of the season.

One thing to know: After reports that he was interested in returning to the NFL prior to the season, Mora was quick to shoot those down, saying, "You know how those guys are. Sometimes they just make stuff up, and throw it out there, and see if it sticks."

One thing to know: Washington lured Peterson away from Boise State in 2013 by making him the highest-paid coach in the Pac-12, a distinction he still holds. Earlier this season, Peterson returned to Boise to face the Broncos, something he called "awkward."

One thing to know: Mike Gundy is still a coach at Oklahoma State, but he's not 40 anymore (he's 48).

One thing to know: Despite all his success and a championship contender this season, Dantonio is just the fifth-highest-paid coach in the Big Ten.

One thing to know: When Patterson took over TCU in 2000, they were in the WAC conference. Since then, they have moved to Conference USA, the Mountain West, and now into an annual championship contender as a member of one of the lucrative Power-5 conferences, the Big 12.

One thing to know: Bielema averaged 10 wins per year at Wisconsin. In his first two seasons at Arkansas he averaged five wins. Despite that, Arkansas gave him an extension prior to this season that will go through the 2020 season.