Half of people who have heart attacks don't even know it 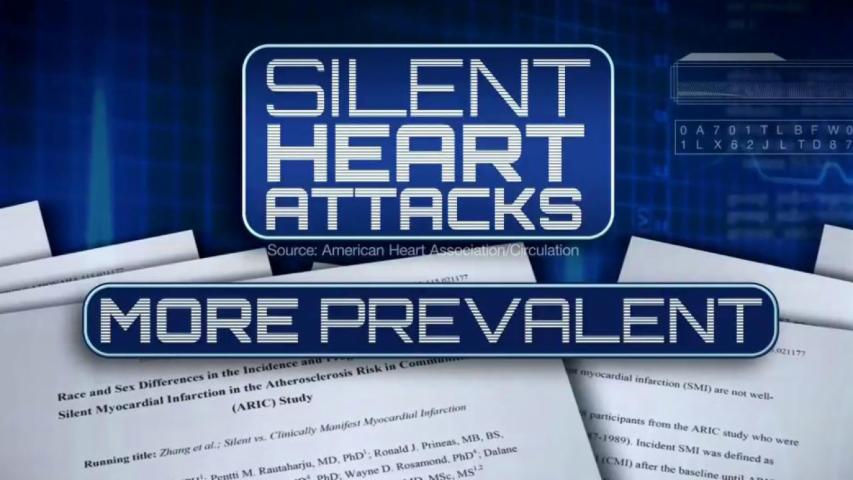 When Julie Llamas Rickman went to the emergency room five years ago, she thought her asthma was acting up. She felt short of breath and tired.

But it turned out she'd had a heart attack. Rickman was only 41 and didn't think she was at particular risk until a doctor told her.

"He said, 'Mrs. Rickman, you have two blockages in your heart... and had a heart attack'. I thought immediately, what did he just say? I started crying," Rickman, who lives in Overland Park, Kansas, told NBC News.

"The only thing that ran through my mind was will I be there for my son?"

Rickman is far from alone. A new study released Monday found that 45 percent of heart attacks in the United States are "silent" — the people having them don't realize.

But even though these heart attacks do not cause the classic symptoms of chest or arm pain, they're doing just as much damage as heart attacks that do.

"The outcome of a silent heart attack is as bad as a heart attack that is recognized while it is happening," said Dr. Elsayed Soliman of Wake Forest Baptist Medical center, who led the study.

"And because patients don't know they have had a silent heart attack, they may not receive the treatment they need to prevent another one."

Soliman's team looked at the medical records of 9,500 middle-aged men and women taking part in a heart disease risk study. Nine years into the study, 317 of the volunteers had "silent" heart attacks and 386 had heart attacks that were noticed right away.

Half of people who have heart attacks don't even know it

Breathe deeply
Take a few deep breaths in and out. It will naturally help to clear your mind.

Get up and go for a walk
You don't even necessarily need to go outside your office. Just stand up and take a few minutes to mosey around.

Thrown on some instrumental or classical music
It will soothe you while clearing your head.

Read leisurely
Even if it's an online article about the latest celebrity gossip, give your mind a break from the monotony of the work in front of you.

Write it out
Writing even for a few minutes helps you gather your thoughts and express what you're feeling.

Get moving
If you're lucky enough to have a full lunch break, take advantage of it and use it to get your blood pumping.

Stop refreshing that inbox
It may seem impossible to fully unplug, but stopping from obsessively checking your email will make a difference.

Sleep as much as you can
A full night's sleep has so many benefits. Coming to work well-rested is key to staying low-stress.

This means that silent heart attacks made up 45 percent of all the heart attacks in the group, Soliman and colleagues reported in the American Heart Association journal circulation.

A heart attack that goes unnoticed can be detected later, when patients get an electrocardiogram (EKG) during a routine doctor visit or a visit to the emergency department. Heart attacks disrupt the heart's electrical activity.

"People who have these so-called silent heart attacks are more likely to have non-specific and subtle symptoms, such as indigestion or a case of the flu, or they may think that they strained a muscle in their chest or their upper back," said Dr. Deborah Ekery, a cardiologist at Heart Hospital of Austin.

"Some folks have prolonged and excessive fatigue that is unexplained. Those are some of the less specific symptoms for a heart attack, but ones that people may ignore or attribute to something else."

Rickman had blockages in two arteries. She ended up with a stent and advice on how to change her eating habits.

Any heart attack, silent or otherwise, is caused when something blocks blood flow to the heart and damages the organ's muscle. This damaged tissue can die and is replaced with stiffer scar tissue.

Silent heart attacks need aggressive treatment, because people who have them are three times as likely to die of heart disease and 34 percent more likely to die from any cause.

They're more common in men, but if a woman has a silent heart attack, she's more likely to die than a man.

"Our study also suggests that blacks may fare worse than whites, but the number of blacks may have been too small to say that with certainty," Soliman said.

Heart disease is the No. 1 killer in the United States. A family history of heart disease is a major risk factor, but so is a lack of exercise, a diet rich in fatty, salty and sweet foods, obesity and diabetes.

Switching to a diet lower in salt, sugar and artery-clogging types of fat can lower the risks, as can eating more fruits, vegetables and whole grains, experts say.

More from NBC News:
We Already Knew Exercise Lowers Cancer Risk. Here's How Much.
Hefty Surprise Medical Bills Can Be a Burden for Families
U.S. Gives Sweeping Guidance to Schools on Transgender Students