Crosby ends slump in OT as Pens even East finals 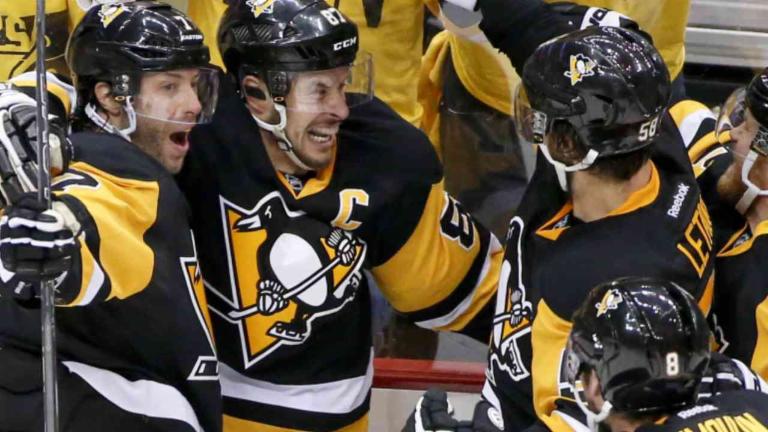 (The Sports Xchange) - Sidney Crosby scored his first goal in nine games 40 seconds into overtime as the Pittsburgh Penguins beat the Tampa Bay Lightning 3-2 in Game Two of the Eastern Conference finals on Monday to even the series.

The Penguins, who squandered a two-goal lead before getting the winner in overtime, now head to Tampa for Game 3 in the best-of-seven series on Wednesday.

Penguins coach Mike Sullivan shook up his lines late in the game to try to get his stars going, and Crosby came through by putting a shot under the crossbar to win it.

Pittsburgh pressed from the start of the extra period, and Crosby emerged with his first overtime goal in 113 playoff games.

Matt Murray won the battle of 21-year-old backup goaltenders, making 19 saves and not allowing a goal after giving up two in a span of 2:33 in the first period.

Lightning goalie Andrei Vasilevskiy was exceptional, making 38 saves, but it was not good enough.

Pittsburgh took all three of the shots in OT.

The Penguins got off to exactly the start they wanted in what could be viewed as a must-win game, getting goals from Matt Cullen and Phil Kessel less than 10 minutes in.

However, with Vasilevskiy turning aside several more excellent scoring chances -- including Bryan Rust on a rush off the opening faceoff -- the Lightning came back after killing off Alex Killorn's holding penalty at 13:23.

Defenseman Anton Stralman, back in the lineup for the first time since breaking his left leg on March 25, got the comeback started by gathering a bouncing puck and lifting it under the crossbar at 16:37.

Stralman needed only a moment to get open, and that occurred when Crosby and Conor Sheary bumped into each other just as Crosby was skating toward Stralman, who scored his fifth goal in four games against Pittsburgh this season.

Jonathan Drouin tied it 2:33 later, taking J.T. Brown's pass at mid-ice, skating to the top of the left circle for a wrist shot and beating Murray inside the far post.

Drouin, in the lineup because of Steven Stamkos' injury, has 11 points in 12 playoff games after getting 10 in 21 regular season games.

Neither team scored in the second, when Murray kept the score tied with an excellent save on Killorn late in the period.

Cullen, who is having an excellent postseason for Pittsburgh at age 39, scored his fourth of the playoffs at 4:32 of the first, off a rebound of an Eric Fehr shot.