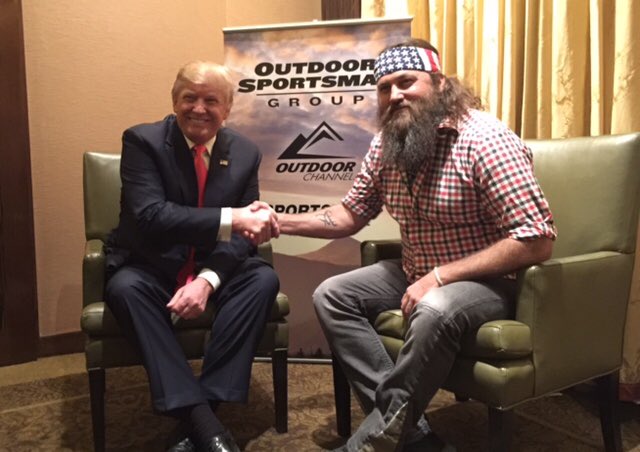 Phil Robertson, the 70-year-old patriarch of A&E's Duck Dynasty, stars in a Citizens United documentary called Torchbearer, which screens at the Cannes Film Festival this week. He (briefly) spoke to The Hollywood Reporter about the film (trailer below), as well as transgender bathrooms, Donald Trump, Hillary Clinton and, of course, the infamous GQ interview that got him briefly suspended from his own TV show a few years ago.

Besides making a movie for Citizens United, you're helping raise money for them via an email sent to conservatives that speaks of transgender bathrooms?

They just wanted me to speak my mind. Common sense tells you, you have a man in a bathroom, and the women have theirs, and they have their little daughters in there. Things have gone real well operating under that arrangement.

So you don't like President Obama's recent declaration that schoolchildren should use whatever bathroom they identify with?

There's been a lot of decrees in the past five years that I don't agree with, and that's just one of them. I don't know what percent of Americans are confused about whether they are male or female, but I'm a Bible man with common sense, and logic tells me you're either a boy or a girl, absent a few medical aberrations.

Why is this such a big issue all of a sudden?

That's an interesting question. What's behind it is removing male and female, like with same-sex marriage, once you get that out of the way, what you open the door for is sexual free-for-all, and depravity goes mainstream.

The trailer for your new movie shows Nazis and mass murderers, then all of a sudden there's Miley Cyrus. What's your problem with her?

The founding fathers were godly men, and I'm no different. ... Our founders said once your religion goes, then your morality goes, then your freedom goes, and you see with Bernie Sanders they're wanting to get rid of the Republic and replace it with socialism. America is floundering in sin, and I know that's a unique word in your part of the country. If you don't see the decadence around you, dude, promoted by Miley Cyrus and others in Hollywood, then I don't know what to tell you. If you got an argument in favor of decadence, then give it to me.

I'm just here to ask you a few questions. So then, besides Duck Dynasty, what shows and movies do you like?

Are you ready? Matt Dillon, U.S. Marshals -- Gunsmoke, and John Wayne and the Western Channel. Also the Weather Channel to see what the Doppler radar is telling me. You have to remember, I've never turned on a computer and I don't own a cell phone. So, dude, you're reaching way down in the woods. I am, as you've noticed, old school. But this is America and I know how tolerant we are of each other, I just like to call sin what it is -; what God tells me it is.

What's the essence of your movie?

When you remove the God of the Bible and suppress the truth and allow men and women to determine right and wrong, historically speaking, it always ends in carnage and murder -; Hitler, the Caesars of Rome, the French Revolution, ISIS. Man, there has been a slaughterhouse on planet Earth, and the common denominator is the removal of God. We're killing babies in their mother's womb now. You were in your mother's womb, dude. If someone went in there and threw this future reporter away, you wouldn't be talking to me, so give me a break.

So, last time a reporter asked you to name a sin, you said 'homosexual behavior' and all hell broke loose. You regret that?

Oh, not at all. He asked me if immorality is sin, and he was specific about homosexuality. But to me, all sex outside a man and woman in marriage is sin, Biblically speaking. So I quoted him the verse. .... Dude, I used to get high, drunk and laid with the worst of 'em. I did it for 28 years. It's not like I've never been on the other side. I lived a very sinful life 'til I ran up on Jesus. Now I'm just trying to help my neighbor out. Why don't we love God, love each other and do what's right? You're in Hollywood. You're in the epicenter.

Well, Hollywood was really mad at you after that GQ interview. Charlie Sheen practically threatened you. You got a response?

Can you believe it? I'm shocked that anyone would be mad at old Robertson who lives on the riverbank with a family who loves each other, and they're mad because someone told them they were sinners. I don't care who you are. One day you're going to be six feet deep in a hole, and so am I. I'm just saying, you're better off having your sins removed. It would give you peace of mind. For all you naysayers, hundreds of thousands have been converted to Jesus from just an old guy like me.

Are you all in on Trump now that he's almost the Republican nominee for president?

I'll go with the platform that I discovered when I was 28. I looked at the Democrats and the Republicans, and at least the Republicans aren't for killing their children or for perversion, so I'm a Republican. So I'll back old Donald.

You think Hillary Clinton is a good candidate on the other side?

Her record is long, and she's already proven herself. I know which way we'll go with her, but I'm not sure with Donald. And remember, I'm a hunter. We shoot squirrels and ducks and eat 'em, and she says she'll take our guns. All we're doing is shooting targets, and alligators and cottonmouth snakes, and she wants to take that away from us?

You say the biggest issue in America today is sin. Any sin in particular?

You'll see it in our documentary up close and personal. One little lie or anything else, it's all sin and sin is killing America. It's not a political fix we need, it's a spiritual one. Now I gotta get going, dude!