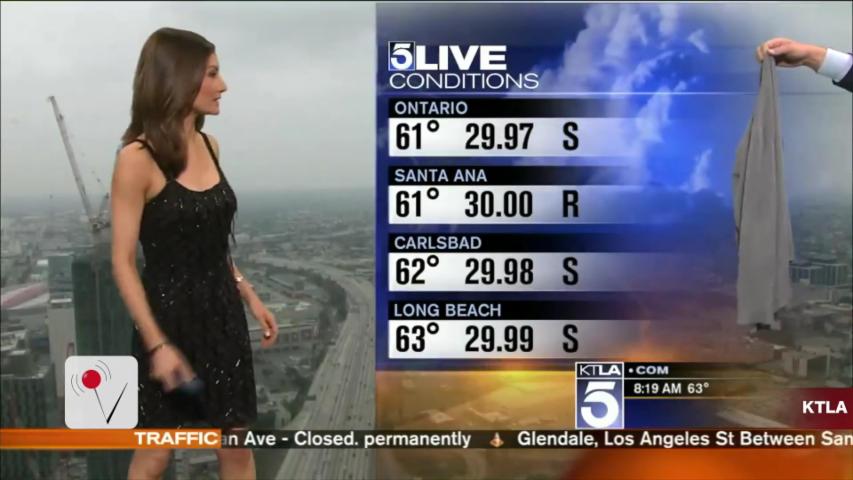 An awkward moment ensued on KTLA on Saturday, as weather reporter Liberté Chan was asked to put on a sweater on live TV.

Mid-broadcast, someone off-camera dangles a sweater in front of Chan. Confused, Chan asks, "What's going on? You want me to put this on? Why? Cause it's cold?"

SEE ALSO: The Target boycott has reached a boiling point -- and sales may suffer as a result

"We're getting a lot of emails," someone off camera responds.

"What?" Chan says as she's helped into the ugly gray sweater. "I look like a librarian now."

Chan posted the clip to her Facebook page, asking people if they thought that the dress was too revealing. The comments were filled with overwhelming support for Chan and her clothing choice.

Before the broadcast, Chan posted this clip, showing her excitement for the dress.

Even if it's early in the AM, can't beat a black beaded dress @KTLAMorningNews@AidanMattox@PistolandStamenpic.twitter.com/HYy1KUMYH1

After the incident, Chan posted a Facebook live video where anchor Chris Burrous read through some of the emails that were sent to KTLA complaining about the dress.

One person who complained about the sweater also stated that handing Chan the sweat on TV "was also in poor taste."

"It's a dress people. Can we talk about my weather performance," Chan fired back as Burrous read the comment.

Chan then explained that she had another dress on, stating, "it just didn't work so I had a back up and that's it, people. I don't know why everyone's hating."

Chan then apologized for being "inappropriate."

The shot then pans to Burrous who was wearing shorts during the broadcast. His bare legs were shielded by his desk.

Whoa. @KTLA! I didn't like the dress either, but you didn't have to make her cover up - ON AIR - like that. How embarrassing.

They made her put on a grey cardigan sweater - ON AIR. After they told her nobody likes her dress - ON AIR @KTLApic.twitter.com/w5HCiKPxvO

I seriously can't believe what I just saw happen on air. They said they'd been getting emails from viewers who hated the dress.

In the middle of a weather report they handed her a cardigan sweater and told her to put it on. She didn't know what to say.

They should have let her finish the weather report and then afterwards they could have pulled her aside. Why address that on AIR? @KTLA

She shouldn't have been publicly shamed like that. https://t.co/tvv2OJ83iN

She handled it well. She was at a loss for words. She put on the sweater & mentioned another dress that didn't fit. Then she moved on. @KTLA

They're trying to make things right, but it's only getting worse. She's about to cry as she holds up another dress pic.twitter.com/xjIHUo9gtD

Poole also mentioned that she nearly tweeted about her dislike for the dress, then thought twice.

Even I was tempted to tweet something about the dress. Then I thought, that's mean and who cares. 2 secs later she was forced to cover up

It's just so easy to tweet things. Social media gives us a voice. Think before you tweet. It matters

More from Mashable:
How to fix Apple Music
ESPN thinks you need to choose between live sports and social media
What the designer of the old Instagram icon thinks of the new one