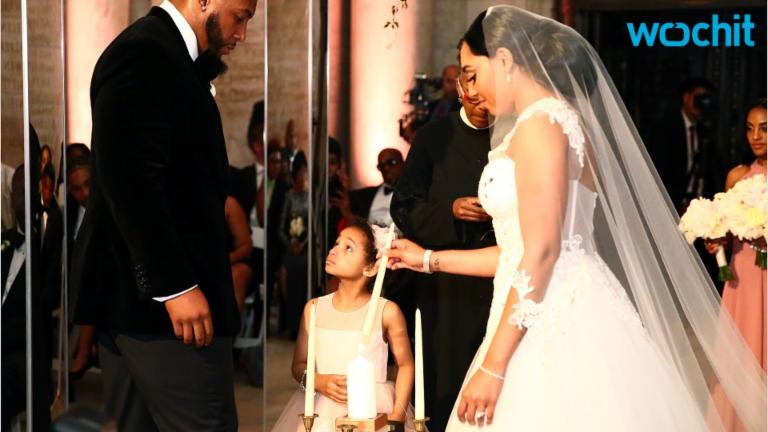 Nearly two years since the diagnosis she is now cancer-free, and on Friday, she gave a precious speech at her dad's New York City wedding.

SEE ALSO: 'Marriage fraud' is a thing — and it's more common than you think

Though it was her father's big day, Leah found herself back in the spotlight after a video of her speech and of her dancing with her father and stepmother went viral.

"We put off the wedding because my daughter was battling cancer. Now that [the wedding] is officially here, it's the beginning of our future and the end to a hard time," the NFL player told People magazine.

Leah served as the flower girl during the wedding ceremony as her father wed longtime fiancée Asha Joyce inside the New York Public Library. She also gave a sweet speech during the reception, caught on camera by actress Holly Robinson Peete.

SEE ALSO: Leah Still challenges Riley Curry to a dance off in the cutest of ways

"Thank you for everybody supporting me and I love my new family," Leah said in the clip as the wedding guests cheerfully looked on. "Now let's party!"

Leah also joined her dad and his bride on the dance floor to get down to Bruno Mars' "Uptown Funk."

The NFL star also shared his own touching tribute to his little girl with an Instagram picture of the two laughing together.

"When I saw [Leah] even before the wedding, I got emotional. We'd been waiting for this moment for a long time," Devon told People.

"To see my daughter walking here at my wedding, healthy, knowing she is cancer-free is a tear-jerker for me."

"This is my first real wedding!" Leah told People. "It's great!"

If you can see past the mascara running down your face, here are some more wonderful shots of Leah and company from the wedding:

More from Mashable:
'Games for girls' shelf nails the ridiculousness of gender stereotypes
Laini Taylor's mysterious new novel is about a clash between gods and men
Water bottles, meet your flipping master