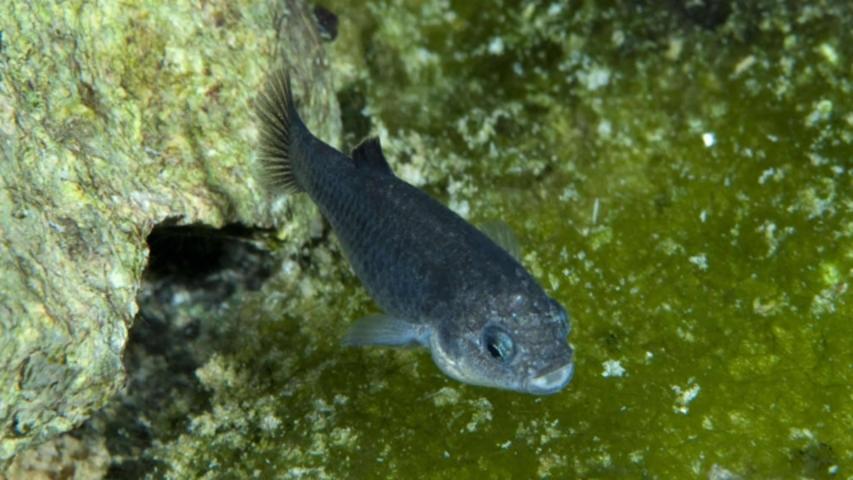 Authorities have arrested and charged three men who allegedly broke into a secured unit at Death Valley National Park, shooting locks and security devices, leaving behind garbage and vomit and possibly killing one of the few living specimens of one of the world's rarest fish, LAist reported.

On April 30, security cameras caught footage of the three men breaking into the landmark, a hundreds-foot deep geothermal pool called Devils Hole in Nye County, Nevada. While they were inside the perimeter, an underwater camera captured at least one member of the group entering the habitat, trudging through and disturbing the waters.

Pupfish populations vary, but rarely exceed 500 individuals at any one time, and they are only found in the water-filled limestone cavern there.

After the men left, leaving behind beer cans and a pair of underwear floating in the water, one of the endangered fish was found dead. Park spokeswoman Abby Wines told the L.A. Times an autopsy revealed the pupfish had died within two days of its discovery, meaning it is possible the intruder killed it. The group also fired a shotgun at park property, damaging signs, locks and equipment.

The National Park Service and the Center for Biological Diversity offered a $15,000 reward for anyone who could identify the culprits.

"We're looking forward to seeing these three men brought to justice," Center for Biological Diversity senior scientist Ileene Anderson told the Times. "Not only did they act stupid, but they destroyed some of the last remaining habitat for one of the rarest fish in the United States."

On Thursday, the Nye County Sheriff's Office posted to Facebook saying the three men had been identified as Steven Schwinkendorf, Edgar Reyes and Trenton Sargent. The department added they will face felony charges for "conspiracy to commit a crime, killing of an endangered species, destruction of property, trespassing, destruction of habitat [and] ex-felon possession of firearm."

In addition to the death of the endangered animal, the office wrote, "fisheries biologists are trying to ascertain the extended damage that may have been done to food sources and egg sites which could lead to more loss of a species whose numbers are now below the last count of 115 in existence."

The International Union for the Conservation of Nature considers the pupfish critically endangered, noting "since population surveys began, the wild population has not exceeded 553 individuals. For reasons that are still unclear, the Devils Hole population began to decline in the mid-1990s. By the fall of 2006, an estimated 38 fish remained in the wild, and two refuge populations were lost. In the fall of 2008, the population was estimated at 127 individuals."

Groundwater extraction has, in the past, threatened the long-term viability of the pupfish, and the Supreme Court ruled in 1976 that pumping operations must cease to preserve the species, according to L.A.ist. The security in place is designed to keep both casual vandals and people who might want to wipe the species out so the extraction can continue.

"The reason why they're under so much security is the worry that if people in the public thought a couple gallons of Clorox could fix this problem, there'd be no more Devils Hole pupfish," Wines told the site. "It doesn't seem these men were motivated by that because they could easily done that. They were most likely just drunk."

More from Mic.com:
Zayn Malik's Music Video for "Like I Would" Has Him Looking Handsomely 'Tron'-Like
People Magazine's #ShareYourSize Body Positive Campaign Turns Into a Twitter Disaster
The Internet Is Freaking Out About This Antifeminist Political Cartoon