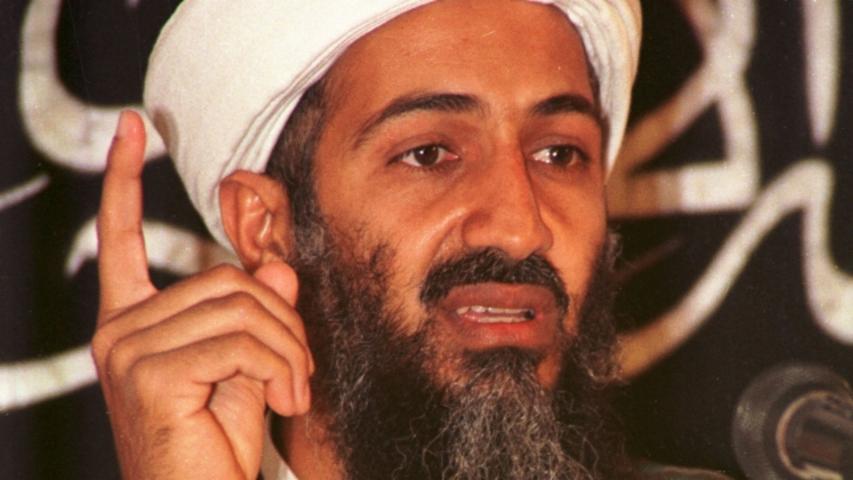 Osama bin Laden's young son might be next in line to lead the terrorist group his father founded decades ago.

Hamza bin Laden, thought to be in his mid-20s, released an audio message this week calling on jihadists to unite and "liberate Palestine," leading experts to theorize that he's being groomed to take over al-Qaida, according to the British publication The Independent.

Andreas Krieg, an analyst at King's College London, told The Independent that Hamza "has been labeled a crown prince" after he survived the 2011 US special-operations raid that killed his father.

See photos from when Obama announced bin Laden's death in 2011

Osama bin Laden's young son is reportedly being groomed to take over al-Qaida
U.S. President Barack Obama stands after addressing the nation on TV from the East Room of the White House to make a televised statement May 1, 2011 in Washington, DC. Bin Laden has been killed near Islamabad, Pakistan almost a decade after the terrorist attacks of Sept. 11, 2001 and his body is in possession of the United States. (Photo by Brendan Smialowski-Pool/Getty Images)
In this handout image provided by The White House, President Barack Obama, Vice President Joe Biden, Secretary of State Hillary Clinton and members of the national security team receive an update on the mission against Osama bin Laden in the Situation Room of the White House May 1, 2011 in Washington, DC. Obama later announced that the United States had killed Bin Laden in an operation led by U.S. Special Forces at a compound in Abbottabad, Pakistan. (Photo by Pete Souza/The White House via Getty Images)
A newspaper vendor displays papers heralding the death of Osama Bin Laden on May 2, 2011 in New York City. President Barack Obama announced the death of Osama bin Laden during a late night address to the nation from the White House in Washington on May 1. The mastermind of the September 11 terrorist attacks was killed in an American military operation at a compound in Pakistan. (Photo by Spencer Platt/Getty Images)
US Marines of Regiment Combat Team 1 (RCT 1) watch TV as President Barack Obama announces the death of Osama Bin Laden, at Camp Dwyer in Helman Province, on May 2, 2011. US President Barack Obama said on May 1, 2011 that justice had been done after the September 11, 2001 attacks with the death of Osama bin Laden, but warned that Al-Qaeda will still try to attack the US. (Photo by Bay Ismoyo via AFP/Getty Images)
People celebrate in Times Square after the death of accused 9-11 mastermind Osama bin Laden was announced by U.S. President Barack Obama May 2, 2011 in New York City. Bin Laden was killed in an operation by U.S. Navy Seals in a compound in Abbottabad, Pakistan. (Photo by Mario Tama/Getty Images)
Newspapers left by visitors grace the fence overlooking the crash site of Flight 93 following the announcement that Osama Bin Laden had been killed in Pakistan May 2, 2011 in Shanksville, Pennsylvania. Nearly 10 years after September 11, 2001 construction is underway to erect a formal memorial at the crash site. Last night U.S. President Barack Obama announced that the United States had killed the most-wanted terrorist Osama Bin Laden in an operation led by U.S. Special Forces in a compound in Abbottabad, Pakistan. (Photo by Jeff Swensen/Getty Images)
Up Next

But he hasn't yet achieved anything significant within the organization, Krieg said.

"I think Hamza is following al-Zawahiri knowing that he cannot emerge from his shadow just yet — if ever," Krieg told The Independent, referring to current al-Qaida leader Ayman al-Zawahiri.

"Being the son of Osama bin Laden alone does not provide you with kudos in a community of jihadists in which some have been fighting for three decades," he added.

Zawahiri knew Osama before he founded the group, and he took over the group's leadership after Osama's death.

Even if he has no plans to step down, the US has been targeting al-Qaida leaders successfully for years. Documents seized from Osama's compound in Pakistan during the raid show that he was particularly concerned about drone strikes targeting Hamza, as Thomas Joscelyn noted last year in The Long War Journal after Hamza released his first audio message.

In it, Hamza called for continued attacks against the West, including "lone wolf" attacks.

At the time, Joscelyn wrote that it was clear the group hopes that Hamza will represent a "new generation of al-Qaida followers."

Bruce Riedel at the Brookings Institution also wrote last year that the audio message was "a clear effort to underscore [Hamza's] legitimacy as the heir to Osama bin Laden."

Hamza has already pledged loyalty to Zawahiri, signifying that he is a member of al-Qaida. Riedel noted that Hamza is an "attractive spokesman for al-Qaida." Hamza's involvement with the group stretches back to when he was a boy. He was reportedly in Afghanistan with his father before the September 11, 2001, terrorist attacks, and then traveled with him to Pakistan after the attacks.

"He carries the legacy of his father's name and life's work," Riedel wrote. "Hamza provides a new face for al-Qaida, one that directly connects to the group's founder."

Riedel concluded that Hamza is "an articulate and dangerous enemy."

Rita Katz, the director of the SITE Intelligence Group, which tracks terrorist communications online, said on Twitter last year that Hamza's audio statement signified a "brand revival" within al-Qaida that could renew the popularity of the group.

Its major jihadist competitor, ISIS — aka the Islamic State, ISIL, or Daesh — has overtaken al-Qaida in recent years in attracting recruits.

Hamza's current whereabouts are unknown, but authorities are searching for him.

In 2011, David Graham at Newsweek reported that Hamza is perhaps Osama's "most militant son." Books on al-Qaida and the bin Laden family have indicated that Hamza has long had the mindset of a jihadist, Graham wrote. One story recalls Hamza reciting a poem about killing infidels when he was a boy.

And in 2001, Al Jazeera aired footage that showed Hamza in a Taliban camp, according to the BBC.

"Other videos use Hamza's voice and show footage of him reading a poem, running drills in a camp — young but eager and clad in fatigues — and leading a group of uniformed boys about his age in chants," Graham wrote.

The charisma that made Hamza a star of jihadist videos as mascot-cum-warrior could translate into even greater fame as he matures into a battle-hardened mujahid, cultivates his ties with al-Qaida's highest levels, and gains new status as the son of the martyred Osama bin Laden.

NOW WATCH: An Al-Qaeda affiliated terrorist group is using this Trump clip in a recruitment video

SEE ALSO: Osama bin Laden's young son might be next in line to lead the terrorist group his father founded decades ago