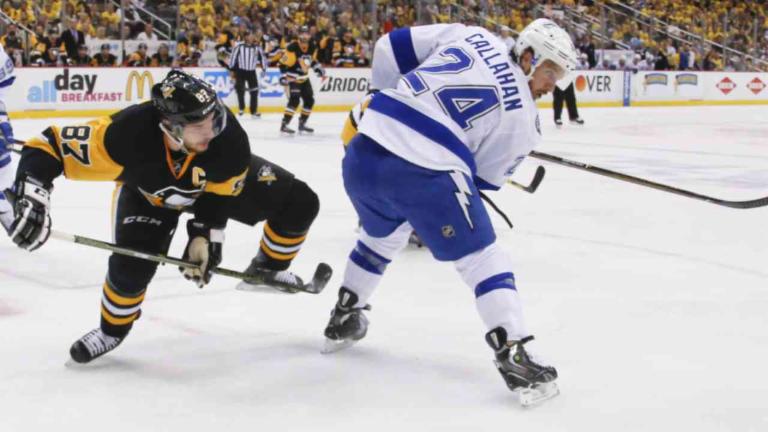 Tampa Bay's road back to the Stanley Cup final became more treacherous on Friday as they watched goaltender Ben Bishop taken off the ice on a stretcher during their Game One win over Pittsburgh.

Bishop went down late in the first period, injuring his left leg that left him writhing in pain, and despite taking a 1-0 lead in the Eastern Conference finals the Lightning would wonder if their title hopes crumbled along with him.

Cooper said X-rays revealed no structural damage for Bishop, but there was no prognosis on his return.

A finalist for the Vezina Trophy, Bishop is Tampa Bay's backbone and he had started in net for each of the team's games in the post-season.

Andrei Vasilevskiy will get the call as goaltender, a 21-year-old with just 40 career contests under his belt.

Vasilevskiy was poised in finishing off a 3-1 triumph for the Lightning on Friday and earned valuable experience in relief of Bishop in last year's Cup final.

Winning a Stanley Cup on the strength of backup goalies is rare but not unprecedented. Chris Osgood famously led the Detroit Red Wings to the trophy in 2008 after taking over for starter Dominik Hasek, though Osgood was a veteran when he was called upon.

The timing of Bishop's injury is particularly cruel for the Lightning who are in red-hot form in the playoffs, having lost just two games through their first 11.

Tampa Bay appeared determined to get back to the Cup finals where they fell to the Chicago Blackhawks a year ago. Bishop, the Lightning's all-time leader in wins, fought hard in that title matchup and revealed after the season that he had torn his groin early in the series but played through it.

But Bishop may not be able to tough his way through his latest ailment and his team might have to brave on without him.

"That's tough, (when) guys go down in that much pain... You feel for the guy, hope he's OK," said Lightning center Brian Boyle. "You know the kind of competitor he is, the team mate he is, and you want to do well for him."