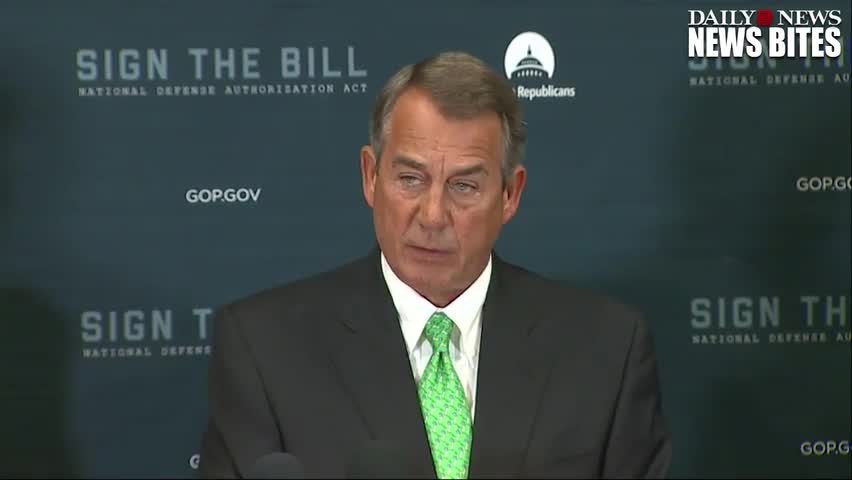 Speaking at the SkyBridge Alternatives Conference in Las Vegas on Thursday, the former speaker expressed relief that Cruz had bowed out of the race.

During his tenure as speaker, Boehner and Cruz clashed repeatedly over tactics and legislation.

See more of Boehner during his time as Speaker of the House:

John Boehner: 'Thank God' Cruz lost!
WASHINGTON, DC - SEPTEMBER 24: Speaker of the House John Boehner (R-OH) (R) speaks with Pope Francis (L) in the U.S. Capitol building before the Pontiff speaks to a joint meeting of Congress September 24, 2015 in Washington, DC. Pope Francis will be the first Pope to ever address a joint meeting of Congress. The Pope is on a six-day trip to the U.S., with stops in Washington, New York City and Philadelphia. (Photo By Bill Clark-PoolGetty Images)
WASHINGTON, DC - MARCH 19: Speaker of the House John Boehner (R-OH) arrives for his weekly press conference at the U.S. Capitol on March 19, 2015 in Washington, DC. Boehner answered questions on the Republican budget, Hillary Clinton's emails, and other topics during the press conference. (Photo by Win McNamee/Getty Images)
Up Next

Their most prominent battle came amid the 2013 government shutdown that Cruz orchestrated with the help of conservative members of Congress, who would later go on to form the House Freedom Caucus. The group fought Boehner on everything from spending bills to trade.

Though he's largely vanished from the national spotlight since stepping down last year, Boehner hasn't stopped criticizing Cruz. At Stanford University last month, the speaker labeled Cruz a "miserable son of a b----" and said that he was "Lucifer in the flesh."

Speaking on Thursday, the former speaker described the 2013 shutdown as possibly the "dumbest thing he ever saw," telling the audience that it was clear to the Republican leadership that the shutdown would not yield the goals sought by Cruz and his House allies.

Though Boehner may be happy that Cruz didn't win the nomination, it's less clear whether he's satisfied with presumptive Republican presidential nominee Donald Trump.

During the event on Thursday, moderator Steven Rattner asked Boehner whether he supported some of Trump's more controversial suggestions — including his proposal to bar Muslims from entering the US, his proposal to send back Syrian refugees, and his suggestion to again use waterboarding, the controversial interrogation technique outlawed by Congress in 2009.

The speaker suggested that he did not support any of the proposals.

NOW WATCH: Here's how Ted Cruz responded to being called 'Lucifer in the flesh' by John Boehner

SEE ALSO: John Boehner has one word of advice for Wall Street: 'plastics'