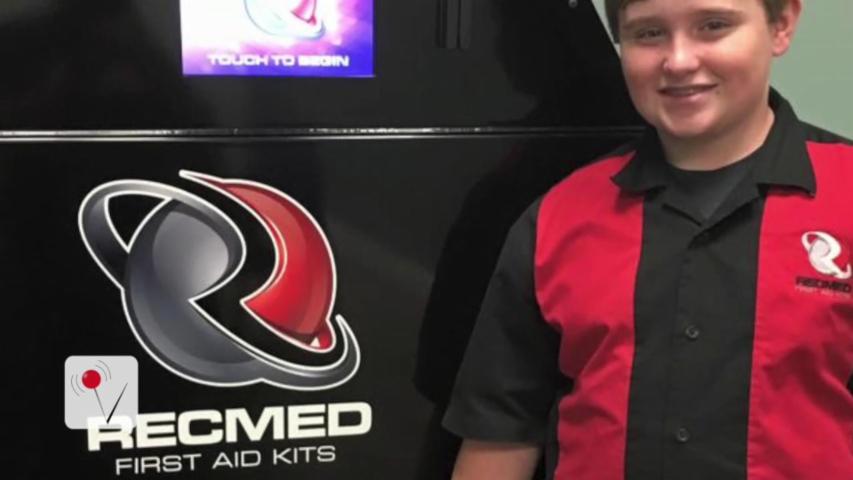 From May 9 to May 11, Brooklyn hosted its annual TechCrunch Disrupt, an event that showcases exceptional startups and technological breakthroughs.

Among the incredibly innovative guests invited this year was a 14-year-old boy from a small town in Alabama named Taylor Rosenthal.

In fact, Rosenthal is the youngest entrepreneur to ever attend the event, but that's not the only thing that has people talking, according to CNN Money.

His startup is called RecMed, a vending machine that sells first aid kits of varying prices and models.

The machines are intended for areas with high-volumes of children, presumably where they'll be outdoors and active, like sports fields and stadiums.

Check out these other notable entrepreneurs killing the game:

This 14-year-old rejected a $30M offer to buy his startup--and it's only the beginning
Co-founders of Birchbox, Hayley Barna and Katia Beauchamp attend the opening of the Birchbox flagship store on July 10, 2014 in New York City. (Photo by Cindy Ord/Getty Images for Birchbox)
Rent the Runway co-founders Jennifer Fleiss and Jennifer Hyman attend the 4th Annual Fashion 2.0 Awards at SVA Theater on March 13, 2013 in New York City. (Photo by Astrid Stawiarz/Getty Images)
Stewart Butterfield, co-founder and chief executive officer of Slack Technologies Inc., smiles during a Bloomberg West television interview at the Vanity Fair 2015 New Establishment Summit in San Francisco, California, U.S., on Tuesday, Oct. 6, 2015. (Photographer: David Paul Morris/Bloomberg via Getty Images)
Snapchat CEO Evan Spiegel speaks onstage during 'Disrupting Information and Communication' at the Vanity Fair New Establishment Summit at Yerba Buena Center for the Arts on October 8, 2014 in San Francisco, California. (Photo by Michael Kovac/Getty Images for Vanity Fair)
Nic Jammet, Jonathan Neman and Nathaniel Ru are the Co-Founders of SweetGreen in Washington, D.C. on October 17, 2011. Jane Black's November column is about SweetGreen and its efforts to stay true to its roots as it grows to be a regional and national chain. Nic Jammet, the young, charismatic co-founder, who is working hard to make sure that they still feature local products from small farms, even in wintertime. They have gone from 1 store in 2007 to 10 today, including several in the Philadelphia area. (Photo by Marvin Joseph/The Washington Post via Getty Images)
Soylent CEO Rob Rhinehart holds a bag of finished product inside a warehouse in Oakland, California where the company runs its business on September 09, 2013. The 24-year-old software engineer developed Soylent, a homemade nutrient concoction, designed as part meal-replacement drink, part thought experiment, providing every necessary nutrient while challenging societys current perception of nutrition. (Photo credit should read Josh Edelson/AFP/Getty Images)
(L-R) Casper Co-Founders & Chief Executive Officers T. Luke Sherwin, Jeff Chapin, Neil Parikh, and Philip Krim attend Casper's LA celebration at Blind Dragon on July 9, 2015 in West Hollywood, California. (Photo by Rachel Murray/Getty Images for Casper Sleep Inc.)
Up Next

Amusement parks and popular tourist attractions are also an intended market--Six Flags has already placed an order for 100 machines.

Given that each of Rosenthal's machines go for $5,500 a piece, that's a solid $550,000 deal (plus the constant cost of restocking the machines and any additional advertising deals on the machines that Rosenthal decides to make).

With this small deal as an example of how much success is potentially in store for the young entrepreneur, it's no surprise that he's denied a $30M offer for the rights to his idea.

Now that's dedication to your product.

RecMed began as a project in a Young Entrepreneurs Academy class, which snowballed in to a legitimate business plan and acquisition​ of a patent for Rosenthal.

His inspiration came from watching his baseball teammates and opponents get injured during games:

"Every time I'd travel for a baseball tournament in Alabama, I'd notice that kids would get hurt and parents couldn't find a Band-Aid. I wanted to solve that."

There was a clear demand a lack of solution, so Rosenthal invented one-- he seems to have the seasoned entrepreneur formula down pat.

Rosenthal's office space is set up at Round House, which asks for a 20 percent stake in RecMed in exchange for a $50,000 investment.

Rosenthal has raised over $100,000 from angel investments to date.

His anticipated (and current) success hasn't left the mini-businessman feeling overconfident, however.

His bag plans for the future? More education:

"I'd like to go to Notre Dame because they have a great business school -- and I'm a fan of their football."

He intends on pursuing a degree in business.

Watch this exclusive interview with Taylor:

More on AOL.com:
4 lessons Mark Cuban taught his 16-year-old 'mini me' about business
20 young entrepreneurs you need to know in 2016
These 3 powerhouse entrepreneurs share their breakthrough moments