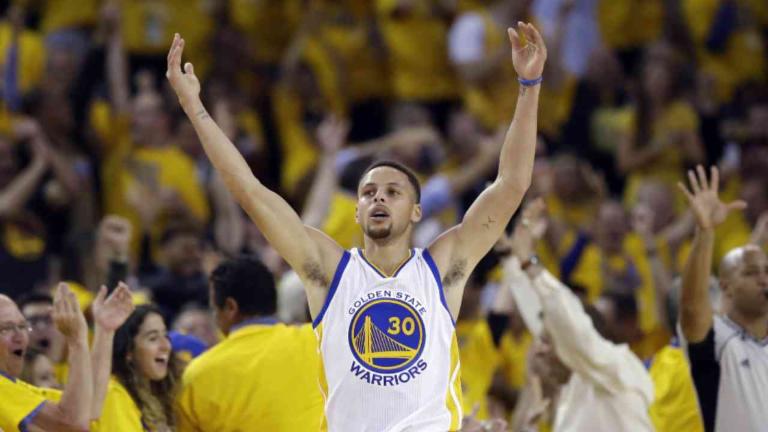 (The Sports Xchange) - Stephen Curry bombed in a 3-pointer with 24.9 seconds remaining on Wednesday as the Golden State Warriors held off the Portland Trail Blazers 125-121 to seal the Western Conference semi-final playoff series four games to one.

The Warriors, who advanced to the Western finals for the second year in a row, await the winner of the Oklahoma City Thunder-San Antonio Spurs semi-final.

Should the Thunder eliminate the Spurs in Game 6 on Thursday, the best-of-seven Western finals would begin on Monday in Oakland.

The fifth-seeded Trail Blazers gave the Warriors a battle in Game 5, leading early by as many as 11 and hanging within 118-116 with the basketball inside the final 50 seconds.

However, Klay Thompson harassed Damian Lillard into a miss from 17 feet, and Curry, freeing himself above the top of the key, nailed a 25-footer for the backbreaking hoop that put Golden State up 121-116.

Thompson led the Warriors with 33 points, hitting 13 of 17 from the field and six of nine 3-point attempts.

In his first start since spraining a ligament in his right knee during the first-round series against the Houston Rockets, he went 36 minutes and found time for a game-high 11 assists.

Draymond Green added a 13-point, 11-rebound double-double, and Shaun Livingston added 10 points for the Warriors, who have won seven straight at home over the Trail Blazers.

Lillard topped Portland with 28 points, but he shot just 7-for-24. He also had seven rebounds and seven assists.

Backcourt mate CJ McCollum came alive in the fourth quarter to finish with 27 points on 11-for-23 shooting.

The Trail Blazers, who led for the first 29 minutes of the game, regained a 96-95 advantage on a driving hoop by McCollum with 10:45 remaining in the contest.

Golden State then ran off to its biggest lead of the night, getting 2- and 3-point hoops by reserve center Marreese Speights in an 11-3 run that produced a 106-99 advantage.

The Trail Blazers would not go away, though. McCollum buried a 3-pointer and converted a three-point play to get Portland within 110-109 with 4:02 to go.

Andre Iguodala and Curry countered with 3-pointers for the Warriors, but McCollum completed a personal 11-point flurry with another trey and a 2-point jumper, keeping Portland's hopes alive at 118-114 with 2:24 to go.

The Trail Blazers used an early 10-0 burst to build a lead. Harkless and Lillard had 3-pointers in the run, which put Portland up 18-8 in the game's fifth minute.

The two 3-pointers were twice as many as the Warriors had in the first 16 minutes of the game.

The Trail Blazers, meanwhile, had six in the first quarter alone. And when Aminu dropped in a pair over a three-possession span midway through the second period, Portland had their biggest lead at 49-38 with 5:35 left in the half.

The Warriors chipped away, getting within 63-58 at the half behind 13 second-quarter points from Thompson.

Golden State momentum bridged the halftime break, and when Curry buried just his second 3-pointer in eight attempts at the 7:01 mark of the third quarter, the Warriors had their first lead, 75-73.

With Curry swishing his third 3-pointer in the waning seconds of the period, the Warriors held a 93-91 edge entering the fourth quarter.