5 planets where the weather will kill you 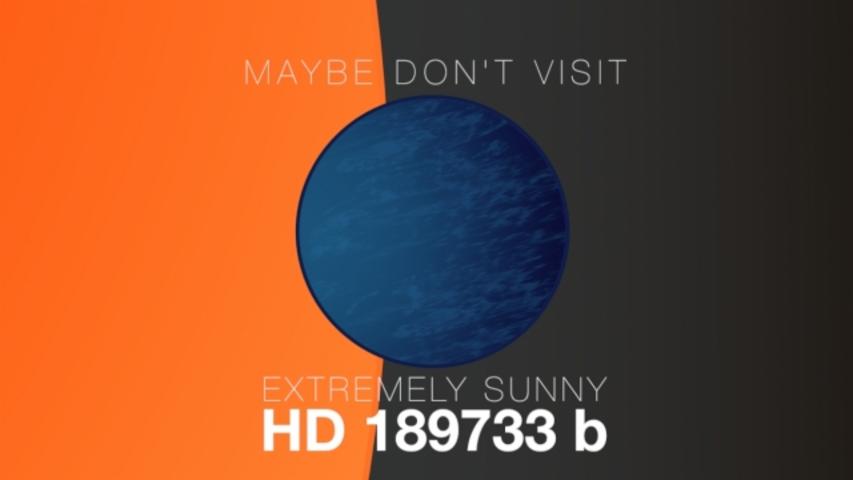 While we keep finding exoplanets, we can't reach any of them -- but that's fine because there are quite a few you probably don't want to visit.

Kepler 70b is really close to its star, making it the hottest known exoplanet: 7,143K, or more than 12,300 degrees Fahrenheit. That's hotter than parts of our own sun.

SEE ALSO: Outrage after woman deliberately releases bedbugs into wild due to her Buddhist principles

If you'd rather experience someplace cold, this planet with a mouthful of a name orbits a long way from a tiny dwarf star. Temperatures average 50K or -369 degrees Fahrenheit — more than six times colder than Antarctica.

HD 80606 b is a Jupiter-sized gas giant with an oblong orbit. It swings from farther away from its star than Venus is from the sun to more than 10 times closer than Mercury.

5 planets where the weather will kill you

You may still have some leftovers from that New Years Eve when the first meteor shower of the year hits its peak. On Sunday evening you'll have a chance to catch up to 40 meteors per hour at peak, but the shower runs annually from January 1-5. Keep your eye on the constellation Bootes for the best chance of seeing one.

This one will likely be easier to watch on your smartphone via livestream, but sometime in March Astronaut Scott Kelly and Cosmonaut Mikhail Kornienko are scheduled to return to Earth after their groundbreaking "Year in Space" mission on board the International Space Station -- they've already been having a blast.

Skywatchers will be treated to a total solar eclipse in early March. The best views will be seen in central Indonesia and the Pacific Ocean where the sun will be fully blocked. A partial eclipse will be visible in most parts of northern Australia and southeast Asia. If you can't be in that part of the world, keep your eye out for the livestream.

One of many full moons in 2016, the April moon was known by Native American tribes as the Full Pink Moon because it typically shows up when the pink flowers of spring return. This year's will be noteworthy because it coincides with a meteor shower.

The Lyrids shower runs from April 16-25. This year it will peak on the same night as as the full moon, which will make all but the brightest meteors hard to see. For the best chance, keep your eye on the constellation Lyra.

You might not know this shower well, but you probably know the celestial body that causes it: Halley's Comet. For those in the Southern Hemisphere, this is a big shower, with up to 60 meteors per hour at its peak. Up north, expect more like 30 meteors per hour. The shower runs from April 19 to May 28 and peaks on the evening of May 6 and coincides with a new moon (no moon) which means darker skies and likely a better show. Look to the constellation Aquarius for this one.

May 9 - Rare Transit of Mercury Across the Sun

You'll want to find a telescope and good solar filter to check out this view, as Mercury will passes between the Earth and the Sun. This is extremely rare event occurs only once every few years, and other than one other transit in 2019, we won't have a chance to see Mercury pass over the Sun until 2039. While this one will be visible throughout North America, Mexico, Central America, South America, and parts of Europe, Asia, and Africa, those on the East Coast of the U.S. and east side of South America will get the best views.

The the third of four full moons in this season, the May 21 full moon is known as a blue moon. This rare calendar event only happens once every few years, giving rise to the term, “once in a blue moon.” There are normally only three full moons in each season of the year, but fourth "blue" moons pop up every 2.7 years on average. Unfortunately, they are not actually blue.

May 22 - Mars at Opposition

If you want to snap a picture of Mars, this is your best chance in 2016 (unless you happen to be a robot on Mars). The red planet will be at its closest point to Earth and its face will be fully illuminated by the Sun. A great time to photograph the planet, it's also a great time to capture some of the details on the surface with a medium-sized telescope.

Mere days after Mars comes in for its close up, Saturn swings on by too. The ringed planet will be brighter than any other time of the year on the 3rd -- and you'll be able to see not only its famed rings, but also a handful of bright moons as well if you pick up a telescope.

The longest day and official start of summer in the Northern Hemipshere brings the shortest day in the Southern Hemisphere. It's another great chance to visit Stonehenge (you definitely won't be alone) or if you're the type of person who never wants the day to end, head up to somewhere like Anchorage, Alaska, where the day will last a full 22 hours.

Hello Jupiter! NASA's Juno spacecraft is on pace to arrive at Jupiter after a five year journey on July 4, 2016. Launched on August 5, 2011, Juno will be inserted into a polar orbit around the giant planet to begin studying Jupiter’s atmosphere and magnetic field until October 2017, when it will go out in a blaze of glory as it crashes onto the planet's surface.

Another great meteor shower that focuses on the constellation Aquarius, this one runs annually from July 12 to August 23 and peaks the night of July 28. The visible moon will block fainter meteors more than a few good ones should shine through.

The Perseids is consistently one of the best meteor showers for those who like to count "shooting stars" with up to 60 meteors per hour at its peak. This year's conditions are especially good for anyone willing to stay up late, since the waxing moon should set shortly after midnight. The meteors are produced by comet Swift-Tuttle, lasting from July 17 to August 24 and peaking on the night of August 12. Look to the constellation of Perseus for the best sight.

If you have access to a telescope and want to catch a view of the blue giant planet, this is your best shot. Neptune will come closest to the Earth than any other time of the year, but at a distance of about 2.8 billion (on average) miles, you'll still need to find a powerful telescope to see it.

The Moon will only darken slightly during this eclipse, since it's passing through the Earth's penumbra and not full shadow, but it'll seen visible in most of eastern Europe, eastern Africa, Asia, and western Australia.

The Draconids is an unusual shower in that the best viewing is in the early evening, and it only produces 10 or so meteors an hour at its peak. Meteors will come from the constellation Draco, and you'll want to find the darkest conditions possible to watch this one.

October's full Moon will also be the first of supermoons for 2016. Supermoons occur when the Moon is both full and closest to the Earth, meaning it appears slightly larger and brighter than usual for many.

Halley's Comet left behind dust that creates the Orionids shower each year. This average shower has around 20 meteors per hour at its peak, which happens peaks this year on October 21 at night. Best viewing will be from a dark location after midnight, and look for meteors to come from the constellation Orion.

Although it's a relatively light meteor shower, the Taurids are unique in that they consists of two separate streams: one that comes from dust of Asteroid 2004 TG10 and another fromdebris left behind by Comet 2P Encke. The shower has an extremely long run -- from September 7 to December 10 -- and it will peak on the the night of November 4. Keep your eye on Taurus and wait for the Moon to set for the best sights.

If you check out only one meteor shower this year, it should be the Geminids. It typically produces up to 120 multicolored meteors per hour at its peak. The shower will last from December 7 to 17, and peak on the night of the 13th. Best viewing will be from a dark location after midnight, looking to the constellation Gemini.
(Photo via TierraLady/Flickr)

This meteor shower will radiate from Ursa Minor -- also known as the little bear -- and produce about 5-10 meteors per hour.

That means temperatures climb more than 1,000 degrees in six hours, and the massive dose of heat triggers storms that cover half the planet.

Kepler 36b doesn't have violent temperature swings, but it's got its own problems: a very close neighbor in Kepler 36c.

Every 97 days, the planets get so close to each other the tidal forces start to pull apart 36b's crust. A gas planet the size of Neptune crawling across the sky is probably a lot of fun to look at, but watch out for the lava.

Last but not least, HD 189733 b. This planet whips around its star in about three Earth days, so close that it doesn't even rotate. Oh, and it probably rains molten glass, driven sideways in 4,500mph winds. Maybe settle for a postcard in this case.

More from AOL.com:
813-karat diamond was just sold as the most expensive diamond in the world
Search still on for 5-year-old who vanished after tornado 69 years ago
Uber and Lyft just suspended services in this major US city, and yours could be next