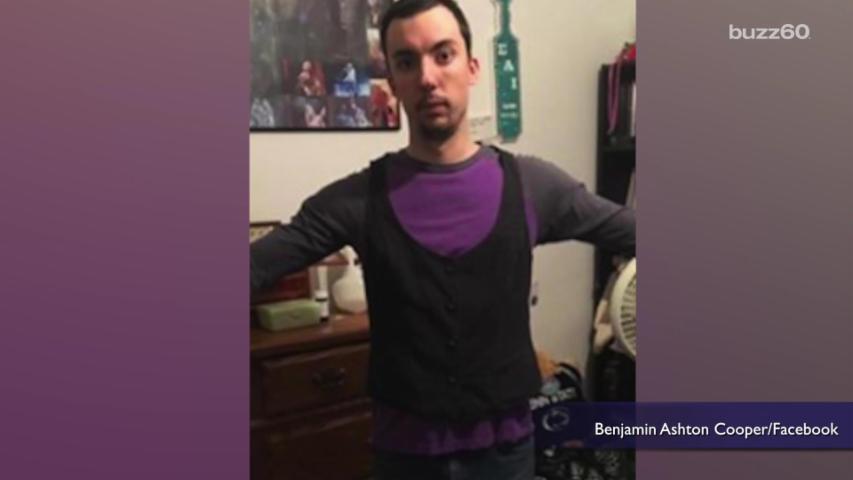 A Pennsylvania man has just learned something that women have been painfully aware of since the dawn of modern civilization -- size labels on ladies' clothing are arbitrary nonsense.

While helping his girlfriend, Nicki, clean out her closet, Benjamin Ashton Cooper noticed something about her clothes that made him angry.

"I noticed that a lot of what she was getting rid of was of the XL size," he said in a Facebook post Thursday evening. "That didn't look right to me, and here's why: They fit me."

Cooper actually tried on some of his girlfriend's garments and noticed that even though they were labeled "extra large," they fit his slim figure pretty well.

"This bulls**t right here is why we have 8 year olds with eating disorders," he said.

Since Cooper aired his grievances on Facebook, his post was shared over 270,000 times by people who seem to support his message, including his own mom.

In a world where most men are blissfully unaware of how harmfully skewed women's clothing sizes are, it's nice to see one willing to speak out against the issue.

This man's Facebook post perfectly demonstrates the major problem with women's clothing
Tess Holliday is being hailed as the first woman of her size to be signed by a mainstream modeling agency.
More press 💅💕 I'm still in awe- thank you to all of my faithful followers for supporting me the past few years and the new ones too! My success is proof that change is here for all of us! So #FUCKyourbeautystandards 🙌👊💥 (photo by @danabrushette) #TessMunster #TessHolliday #plussize #MeetMiLK #MiLKsGotTalent #MiLKcurve"
Today was magical ✨ #behindthescenes with @adam_wallacavage for @jlbeaverton @tarinatarantino #wonderland #TessHolliday #plussizemodel
I can finally share my big news!!! I'm now represented by @milkmodelmanagement in London 🇬🇧 I'm the first plus size model EVER (I die) my size & height to be signed to a major agency in the 🌍! 😭 "Super excited to announce we're now representing Tess Holliday, plus-size model/blogger... Watch this space @tessholliday 👸👸👸👸👸 #TessMunster #TessHolliday #plussize #MeetMiLK #MiLKsGotTalent #MiLKcurve"
My boo @priscillaono did my makeup for the first time & #SLAY 🙌😭 Top by @dominodollhouse Use TESSWNT to get 10% off @dominodollhouse #makeupbypriscillaono
“Its hard to be a diamond in a rhinestone world.” 💎✨ #DollyParton
Shooting for @dominodollhouse today... This dress is just 🙌 🔥#moveoverangelinajolie #bts #tessmunster #plussizemodel
Behind the scenes with @steadyclothing today & I have a special announcement: Here is a sneak peak of the "Tess" signature dress for the @steadyclothing Spring 2015 line 💕 Stay tuned!! #steadyclothing #rocksteady #rocksteadyclothing #tessholliday #plussizemodel
This was taken yesterday after hiking in the #Buderim rainforest in Australia. It was tough for me because a) I wasn't prepared & had a bikini & #aldo sandals which wasn't the best outfit (but I looked hot TBH) & b) even though I'm active it was a strenuous hike! However I pushed myself because I'm stubborn & never quit. Don't let your size limit you on missing out on the wonders the world has for you. This has ZERO to do with health & all to do with believing in yourself 🌍👊✨ #effyourbeautystandards
💪Welcome to the gun show 😎 #mooloolaba
Got ready in a record 30 mins for an impromptu date last night 💋 miracles happen😂 necklace by @honeybgold 💦
I hope this makes you realize that it's okay to be yourself, even if you happen to exist in a fat body. I'm sexy, confident & give no fucks. Also, fuck anyone for saying otherwise. Photo (unedited) shot by @themanuc Hair by @hisvintagetouch MUA @valentinaazulxo Stylist @styledbyreah #effyourbeautystandards
casual #newyearseve, & I ain't mad at it #sashayaway2014 🌸🌺🌸
Spending my entire vacation in a bikini✔️ Not giving a fuck ✔️ #effyourbeautystandards
A lot of who have been asking if I was married yet, & the answer is no. I changed my name because my career is moving in a different direction & I wanted my name to reflect that. When I do get hitched- you will know it! 💍✨ #alwaysbeTessMunstertho
Up Next

More from AOL.com:
The best selling products on Amazon
Jeffery Self recounts his meteoric rise to social stardom
Apple links up with Facebook to help you honor mom on Mother's Day