Elizabeth Warren fires back at Trump: 'Really? That's the best you could come up with?' 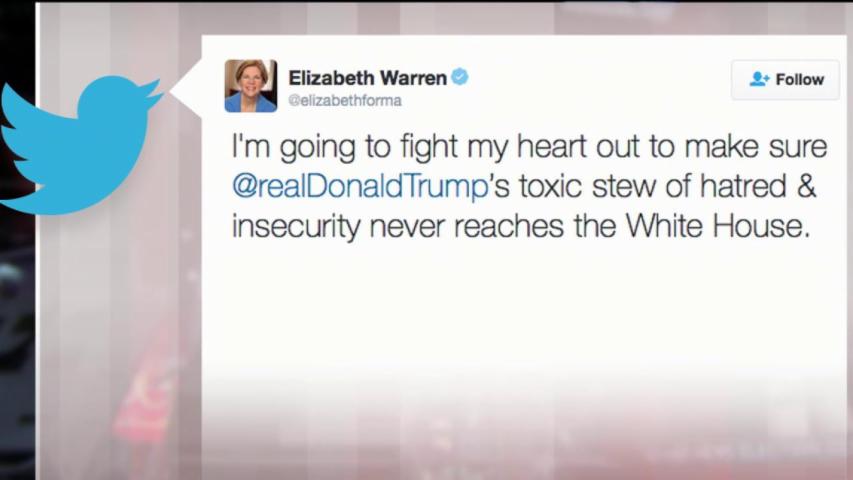 Elizabeth Warren is not impressed.

That's what the Massachusetts senator made clear in an exclusive interview with Mic, as she responded to presumptive Republican presidential nominee Donald Trump's new moniker for her: "Goofy Elizabeth Warren."

"Really? That's the best you could come up with? Come on. I thought Donald Trump said he was a guy that was good with words," Warren said in a sit-down with Mic's Zeeshan Aleem. The full interview will be available Thursday.

Warren vs. Trump: The real estate magnate's jab at the progressive favorite came during a Twitter broadside against Warren, who made waves with an impassioned warning against Trump's "toxic stew of hatred and insecurity."

Warren has taken on an increasingly prominent role as an attack dog against Trump, stoking speculation that likely Democratic nominee Hillary Clinton will tap the senator to serve as her running mate.

Bring them on, Trump said during his Friday night tweetstorm, hitting Warren on her disputed claims of Native American ancestry.

I hope corrupt Hillary Clinton chooses goofy Elizabeth Warren as her running mate. I will defeat them both.

Let’s properly check goofy Elizabeth Warren’s records to see if she is Native American. I say she’s a fraud!

Goofy Elizabeth Warren, Hillary Clinton’s flunky, has a career that is totally based on a lie. She is not Native American.

Goofy Elizabeth Warren is weak and ineffective. Does nothing. All talk, no action -- maybe her Native American name?

"I don't think he likes that." Asked why she thought Trump responded so viscerally, Warren said he fears being held accountable.

"I don't know if it's that Donald Trump is not used to people who stand up and challenge him, and I don't mean on silly stuff, or on personal stuff. This is really about the issues he's put on the table and talking about him, Donald Trump," she said, accusing him of "defrauding students" through the for-profit Trump University and "cheating others" by declaring bankruptcy.

"I don't think that's where Donald Trump wants to be, the idea that he has to be held accountable, I don't think he likes that," Warren continued. "I think he's actually a lot weaker than he wants to admit."

Check back later for more clips from our interview with Warren.

More from Mic.com:
John Kasich Tried Using the Force Just Before Being Defeated By the Empire (Donald Trump)
1 Chart Shows Why Democrats Should Be Very Nervous About November
The 5 "Greatest" Hits From Donald Trump's Campaign So Far