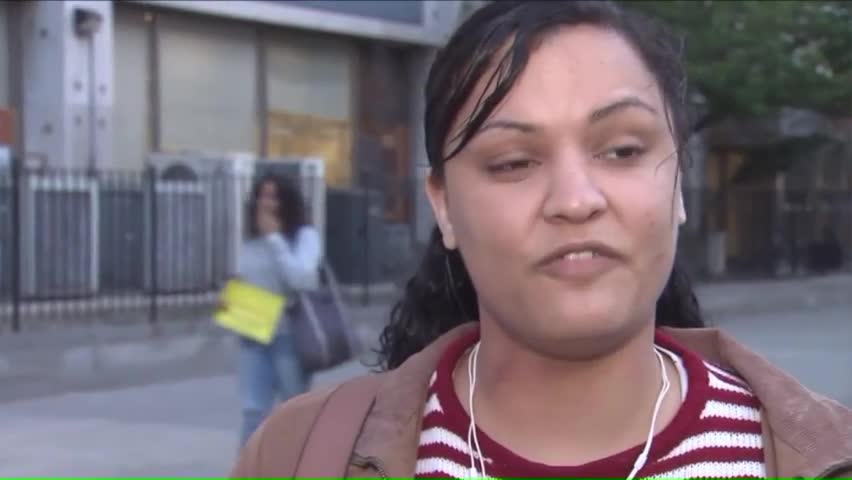 THE BRONX (WPIX) — The woman seen in cell phone video verbally and physically assaulting a transgender woman told her side of the story to PIX11 Monday night in an exclusive interview.

"Don't judge me unless you know me," said Sarah Eldridge.

SEE ALSO: Disturbing video surfaces of transgender woman being attacked on train while others watch and do nothing

Eldridge and Pearl Love crossed paths on a No. 4 train on April 28th. Eldridge used homophobic, transphobic and racist slurs during their encounter.

Love recorded the interaction and placed the video on Facebook.

"When I stepped on the train, I sat down and I had an attitude because I was robbed earlier that week in the Bronx," Eldridge explained.

Eldridge admits she was wrong for becoming loud and aggressive, however, "I meant what I said. That person offended me in a way because she was to me, explicit."

"I couldn't stand it," Eldridge said.

The subway assault video has been viewed hundreds of thousands of times; Eldridge says now she feels like a victim. "I've received death threats on Facebook, by several people, saying that they want to find me. They want to kill me and I have deactivated my Facebook. I've called police."

Exclusive: Woman seen assaulting transgender woman on subway in viral video speaks out
Actress Laverne Cox from the Netflix series "Orange is the New Black" arrives at the 68th Primetime Emmy Awards in Los Angeles, California U.S., September 18, 2016. REUTERS/Lucy Nicholson
In this June 1, 2015 photo, a journalist looks at Vanity Fair's Twitter site with the Tweet about Caitlyn Jenner, who will be featured on the July cover of the magazine. Caitlyn Jenner, the transgender Olympic champion formerly known as Bruce, on Monday unveiled her new name and look in a sexy Vanity Fair cover shoot -- drawing widespread praise, including from the White House. Lesbian, gay, bisexual and transgender campaigners -- and many well-wishers -- welcomed the high-profile debut, as did the 65-year-old Jenner's family, which includes the media-savvy celebrity Kardashian clan. 'I'm so happy after such a long struggle to be living my true self,' Jenner wrote in her first tweet after the magazine released the July cover photo by renowned photographer Annie Leibovitz. AFP PHOTO / MLADEN ANTONOV (Photo credit should read MLADEN ANTONOV/AFP/Getty Images)
Writer Janet Mock attends Marie Claire's Second-Annual New Guard Lunch at Hearst Tower on October 30, 2014 in New York City. (Photo by Robin Marchant/Getty Images for Marie Claire)
Transgender former US Navy Seal Senior Chief Kristin Beck speaks during a conference entitled 'Perspectives on Transgender Military Service from Around the Globe' organized by the American Civil Liberties Union (ACLU) and the Palm Center in Washington on October 20, 2014. Transgender military personnel from 18 countries who allow them to serve openly, gathered to talk about their experiences and discuss whether the US military could join them. It is estimated that more than 15, 000 transgender personnel currently serve in the US military, but policy requires their separation if they are discovered, according to the ACLU. AFP PHOTO/Nicholas KAMM (Photo credit should read NICHOLAS KAMM/AFP/Getty Images)
WEST HOLLYWOOD, CA - MAY 07: Model Gigi Gorgeous attends the NYLON Young Hollywood Party presented by BCBGeneration at HYDE Sunset: Kitchen + Cocktails on May 7, 2015 in West Hollywood, California. (Photo by Jason Kempin/Getty Images for NYLON)
NEW YORK, NY - NOVEMBER 13: Mixed martial artist Fallon Fox attends the 2013 Emery Awards at Cipriani Wall Street on November 13, 2013 in New York City. (Photo by Cindy Ord/Getty Images)
Model Lea T presents a creation by Teca by Helo Rocha during the 2016 Summer collections of the Sao Paulo Fashion Week in Sao Paulo, Brazil, on April 16, 2015. AFP PHOTO / MIGUEL SCHINCARIOL (Photo credit should read Miguel Schincariol/AFP/Getty Images)
Jenna Talackova (R) arrives for a press conference in Los Angeles with her attorner Gloria Allred (out of frame) on April 3, 2012. Canada's Miss Universe pageant said it would allow the transgendered model to compete in its pageant as long as Canada recognizes her gender as a woman. Talackova was previously disqualified, she said, because she used to be male. AFP PHOTO/Frederic J. BROWN (Photo credit should read FREDERIC J. BROWN/AFP/Getty Images)
Director, writer and producer Lana Wachowski poses on arrival for the Los Angeles Premiere of the film 'Jupiter Ascending' in Hollywood, California on February 2, 2015. The film opens on February 6. AFP PHOTO / FREDERIC J. BROWN (Photo credit should read FREDERIC J. BROWN/AFP/Getty Images)
BEVERLY HILLS, CA - FEBRUARY 28: Caitlyn Jenner attends the 2016 Vanity Fair Oscar Party Hosted By Graydon Carter at Wallis Annenberg Center for the Performing Arts on February 28, 2016 in Beverly Hills, California. (Photo by Karwai Tang/WireImage)
Up Next

More from AOL.com:
Disturbing video surfaces of transgender woman being attacked on train while others watch and do nothing
Dozens of statues stolen from cemetery
Jennifer Lopez goes country in Jennifer Nettles' new song 'My House'