Bellamy Young on why working with Kerry Washington is so 'delicious' 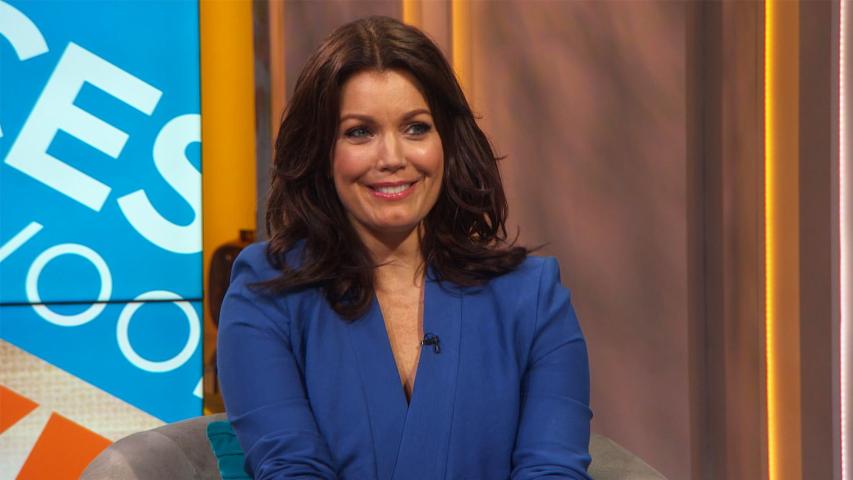 Bellamy Young makes it look easy. As former first lady -- and potential future president -- Mellie Grant on ABC's "Scandal," Young has been put through the ringer. She has chronicled her ups and downs with resilience, poise and downright gutting emotion.

But, much like her character, it's never really been "easy" for Young.

SEE ALSO: Morgan Freeman talks about his journey to becoming 'a believer' in God

The actress' "debilitating" struggle with migraines threatened to sidetrack her mounting acting career many times, often forcing her to stop work in the middle of the day to retreat to a bed and recover from the "searing pain." Though she eventually found a way to control the pain through TREXIMET, Young still regularly experiences migraines on the set of "Scandal."

In the current fifth season of ABC's hit show, Young has taken Mellie Grant to new heights. Officially divorced from her president husband, Fitz, Grant has taken the reigns of her life as a serious politician with her eye on the Oval Office. She surprised everyone by naming her husband's former mistress, Kerry Washington's Olivia Pope, as her campaign manager, and the two powerful women have proven to be quite the duo.

We recently caught up with Bellamy Young at the Eventi Hotel in Chelsea to talk about how she overcame her migraines, her incredible story arc as Mellie Grant on "Scandal," the most shocking moment in the show's five seasons and why working with Kerry Washington is so "delicious."

50 PHOTOS
Bellamy Young out and about
See Gallery

Check out our full conversation with Bellamy Young below:

Talk to me about your partnership with TREXIMET, which is now going on its second year. Why did it feel like a good partnership for you?

I'm living proof that TREXIMET can change your life: It has not only liberated me to be free of migraines, but also to be free of my constant worry that I'm going to get a migraine. It has given me back days that I would've lost, and I'm thrilled to have a second year with TREXIMET to get the conversation going, because people suffer in silence needlessly, which is what I did when I was a teenager.

So often migraines are minimized as "just" headaches or complaining or being "a female thing," but 36 million Americans have migraines. Three times as many women as men [have them], but that doesn't make it "a female thing." It's a very different pathology, and nowadays there are so many new medicines available -- TREXIMET might not work for everyone, but I just like having these conversations to encourage people to get to their doctors and see what might be right for them, because I've gotten my life back, and I don't think anybody else should suffer needlessly.

Do you still suffer from migraines, even though you've seemingly gotten them under control?

Oh, I absolutely do! It's not a cure, but a year and a half ago, before I had a TREXIMET in my life, I would have this searing pain in my left eye and then my field of vision would narrow like horse blinders and that's how I would know that, instead of a headache, there was a migraine coming along. I had no recourse but to lose the rest of the day: I'd have to stop work or leave wherever I was, and I also couldn't drive home with a migraine coming on, so I'd just have to get somewhere where I could lie down and turn off all of the lights and power myself down like a computer and start the next day. It was completely debilitating. The World Health Organization lists it as one of the most 20 debilitating illnesses. You can't negotiate with a migraine.

Now, though, I'll have the pain in my left eye, but I have TREXIMET in my purse, so I can stay at work and production doesn't have to stop. I have my life back! I'm so happy to have these conversations, because I want everyone to be free of worry and free of pain.

I want to encourage everyone to go to reliefwithinreach.com, because it's a wonderful resource to learn a little bit more about what your options are, empowering you to talk to a doctor and change your life.

This season of "Scandal" has been a pretty spot-on satire of the current 2016 election. Hollis Doyle seems like a stand-in for Hollis Doyle and your character, Mellie Grant, has shades of Hillary Clinton. What has it been like to be a part of it?

It's been amazing! It's been really inspired. We did a panel with the Smithsonian last week in D.C., and Shonda [Rhimes] was on the it with us, and we always find out so much that we don't know when we do a panel with her. She has said all along that she knows where the story ends, but I didn't know [before the panel] that she's known for years that she was going to run Hollis Doyle as a presidential candidate.

In juxtaposition, "Lawn Chair" was definitely written in response to what happened in Ferguson. Hollis Doyle was always going to run for president, though, so I think [the writers] are a little irked that they were beaten to the punch with that.

You've also had a bunch more screen time with Olivia Pope (played by Kerry Washington), as she's been serving as Mellie's campaign manager. How has it been working so much more closely with Kerry?

Delicious! Most of our past scenes together have been in enmity, so it's been absolutely delicious this year to have a chapter that is "post-Fitz" -- it was born out of necessity, because Mellie is a smart woman and she knows who the best person to run her campaign is. These two women have really found some healing and, out of that, they've found true kinship where they can lean on each other and support each other at a time when neither one of them has that in their life otherwise.

Mellie has had quite the story arc, going from a series regular in the first season to a potential future president in the current one. Did you ever expect to see such a transformation in Mellie during your time on "Scandal"?

No! Oh my goodness, I was just so happy to be there at all -- even in the pilot. I was sad when I thought I was only going to be there for three episodes, but so elated when they brought me on as a regular. I know it was always in Mellie's heart to be president, but it seemed very far away in those beginning years.

It's really been incredible this year to explore her in the driver's seat, instead of just backseat driving, but it's also been scary, because it's so much harder to actually make those calls. It's been fun to see her doubt herself and try to be resilient and make horrible gaffs and move forward from them. I love it; I love Mellie on this track.

She really is the most resilient character on "Scandal," which makes her my favorite character on the show, and I'm not just saying that. She's had so many horrible things happen to her over the years to the point where it's impossible to name them all. What have been the most difficult moments for you to tackle as an actress?

Well, the rape [by Fitz's father, Jerry Grant] was huge. Barry Bostwick was amazing -- that scene could've been the worst thing in the world to shoot, but he was such an angel. I will also never forget the table read where we lost little Jerry. For some reason -- I think because it was such new information at the time -- the table read was especially gutting in comparison to the actual shooting of it. I think those are the two biggest ones for me. The divorce, though, was also pretty seismic. It was cathartic, but seismic.

Definitely. It's almost like we saw it coming, but we never thought it would actually happen.

Yeah, exactly! We were always thinking, "Are they ever actually going to split?" But then she just got to say to him, you know, "I could've had a different life if it weren't for you." That felt crazy to say.

Shonda Rhimes sure knows how to throw in a surprising plot twist. What has been the most shocking moment for you in the five seasons of "Scandal"?

Oh my gosh! How do you even pick? In terms of the story arc, the most shocking moment for us was the "Dad?" moment. I think that moment was the one where all of us truly lost our minds. The advent of Smelly Mellie, actually, was shocking, too. It's not a real "moment," but it took us a long time to find where that tone lived, you know?

You also have a new film, Night Stalker, coming up, which is about the 1985 killing spree by Richard Ramirez in Los Angeles. When can we expect that to come out?

We're premiering at the Seattle Film Festival on June 4, and I'm so proud of it. I haven't gotten to see the whole cut yet, because I've bene working. But working with Megan Griffiths, the director, was so inspiring that you almost forgot there was going to be an artifact at the end that was a movie. It was just so gratifying itself as an experience. Lou Diamond Phillips gives such a beautiful performance, as well.

More from AOL.com:
Here is what the little girl from 'Smart House' and 'Au Pair' looks like today
Where are Justin Bieber's shoes now that he needs them?
Inside the complicated romantic web between Orlando Bloom, Selena Gomez, Justin Bieber, Katy Perry and Miranda Kerr