Girl kicked out of prom for wearing tuxedo 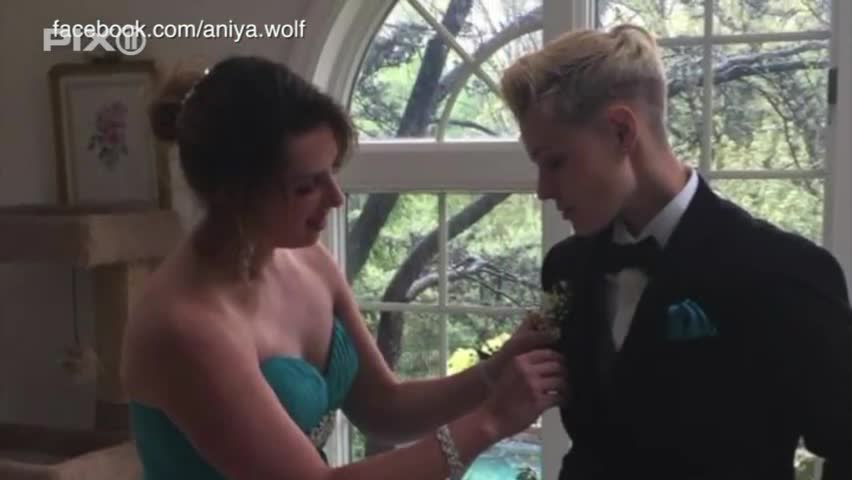 HARRISBURG, Penn. (WPIX) — A Pennsylvania high school student had the experience of a lifetime at prom, but not in the way she expected.

Aniya Wolf, a student at Bishop McDevitt High School near Harrisburg, is a lesbian who doesn't wear girly clothes.

Her school uniform was strictly a shirt and pants, so for prom she bought a tuxedo.

An email from the school explained girls had to wear a dress to prom, but Wolf's family said the e-mail came out last minute.

Wolf ignored the dress code and went to prom anyway and was thrown out. She told WHTM that a school official grabbed her by the arm and had threatened to call police.

"On Friday afternoon, when it was brought to the attention of the school administration that a female student was planning to wear a tuxedo, we contacted her mother in hopes we could resolve the situation," the school said in a statement posted to Facebook.

"It's important to note that students who haven't adhered to the dress code in past years haven't been admitted to the prom.

Bishop McDdevitt will continue to practice acceptance and love for all of our students."

Girl kicked out of prom for wearing tuxedo
1950s: When it comes to 1950s prom fashion, “Grease” is the word. Think tea-length, swingy dresses perfect for doing the hand jive. The poofier the skirt, the better.
1970s: In the 70s, the fellas rocked some far out tuxedos, while the girls loved bohemian-inspired gunny sack shapes.
1970s: Floral prints and pastels were also at their pinnacle.
1980s: Prom in the 80s meant big sleeves, big hair and bright colors.
1990s: The 90s saw a spike in sleek, shimmering dresses, inspired by style icons like Britney Spears. Although some may say her denim on denim look circa the 2001 AMA’s comes in as a close second.
Up Next

More from AOL.com:
These superhero-themed prom outfits are out of this world
Teen takes his mom to the prom she never had
The hidden message of Victoria's Secret's new unpadded bras? Small breasts are better.