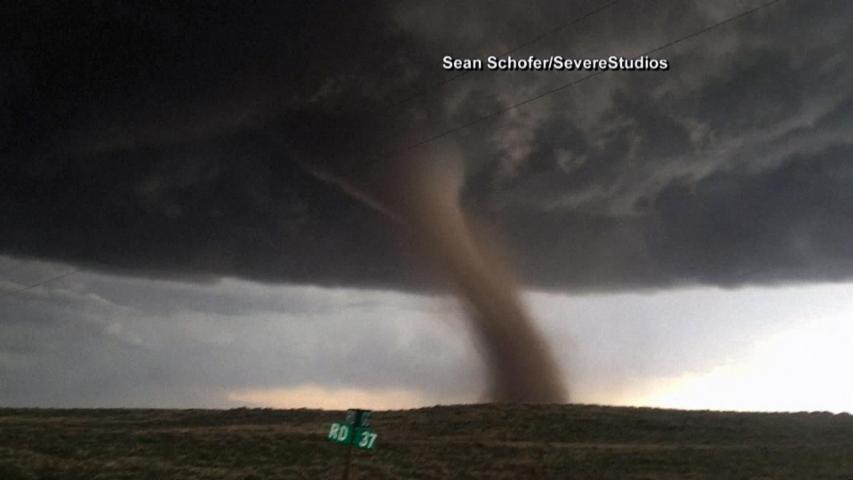 A tornado injured at least five people and damaged buildings in eastern Colorado on Saturday, according to authorities.

The Yuma County Sheriff's Office said its deputies would be assessing the damage and coordinating with first responders after the half-mile-wide twister touched down at the north edge of the city of Wray.

Four structures suffered "significant" damage and five people suffered "minor injuries," according to the sheriff's office. It added that the storm knocked down around 40 electric poles.

Several other tornadoes were reported in the area of Wray, a town of around 2,300 about 12 miles from the Nebraska border.

The largest tornado followed U.S. 385 north of the town, throwing down power lines and strewing debris across the highway.

Elsewhere in the state a "multi-vortex tornado" was reported over Interstate 76 near the town of Wiggins. At least a dozen trailers were overturned, NBC affiliate KUSA reported.

Another tornado reportedly touched down and caused damage to several structures west of Wiggins in Weld County. The Weld County Sheriff's office said no one was injured.

As authorities continued to assess the damage, forecasters warned of severe thunderstorms forecast for the Plains.

Thunderstorms were expected to form over Kansas, Oklahoma, and central and west Texas Sunday, with the potential for tornadoes and hail that could cause damage, according to The Weather Channel.

More from AOL.com:
A wet and stormy Mother's Day is ahead in Plains, West and Northeast
Search still on for 5-year-old who vanished after tornado 69 years ago
'Y'all ruined my life,' says Texas man, killing co-worker, self