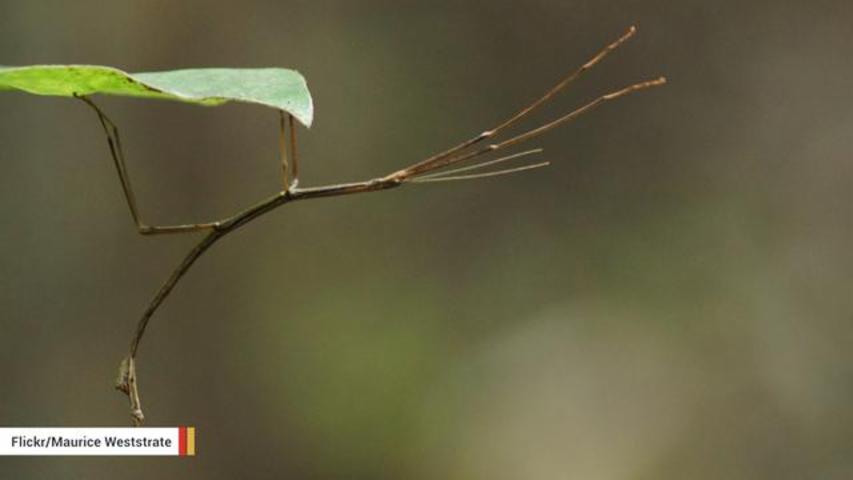 People generally think of insects as small critters, but a specimen in China proves that this is not always the case.

Discovery News is reporting that authorities there are staking claim to the world's longest insect, with a creature from the country's southern region measuring in at 24.6 inches.

The previous record-holder from Malaysia was over 22-inches long.

According to The Verge, the newly discovered insect, which resembles a long stick, was discovered in 2014 by Zhao Li, a member of the Insect Museum of West China.

He told the Xinhua News Agency that locals had informed him about the huge insect, but it took him years to find it.

A paper about the insect is forthcoming.

Related: Check out some other world records:

Newly revealed world's longest insect is 2 feet long
NEW YORK, NY - MAY 17: Bartolo Colon #40 of the New York Mets holds his Guinness World Record plaque for being the oldest major league player to hit his first home run before the game between the New York Mets and the Washington Nationals at Citi Field on May 17, 2016 in the Flushing neighborhood of the Queens borough of New York City. (Photo by Elsa/Getty Images)
A general view shows participants playing the Monopoly board game in an attempt for the Guinness world record for most people playing a Monopoly game in a single venue at Universal Studios Resorts World at Sentosa in Singapore on March 19, 2016. Some 605 people participated in the record-breaking event on World Monopoly Day. / AFP / ROSLAN RAHMAN (Photo credit should read ROSLAN RAHMAN/AFP/Getty Images)
MURMANSK REGION, RUSSIA. FEBRUARY 22, 2016. Russian racing driver Mikhail Aleshin driving a Formula 1 car on the frozen Lake Lovozero. Aleshin has set a Guinness World Record by driving a Formula One car at the top speed of 228 km/h on ice above the Arctic Circle. Lev Fedoseyev/TASS (Photo by Lev Fedoseyev\TASS via Getty Images)
TORONTO, ON - FEBRUARY 15, 2016 Guinness World Records adjudicator Christina Conlon presented a certificate to Steph Bigford, brand manager for Robin Hood on breaking the record for the largest cookie mosaic. Robin Hood Flour has broken the world record for largest cookie mosaic by laying out a 1440 sq ft world map comprised of 13,690 cookies total shortbread cookies highlighting the countries where WE Bake for Change has made a difference. The even was part of Family Day festivities at the Evergreen Brick Works. (Chris So/Toronto Star via Getty Images)
KATHMANDU, NEPAL - DECEMBER 19: Nepalese Uttam Moktan performs yoga to challenge the Guinness World Record of the longest yoga marathon in Kathmandu, Nepal on December 19, 2015. He performed various yoga positions for 50 hours and 15 minutes to break the record of Indian Yograj C.P. who kept the record of longest yoga marathon lasted for 40 hours and 15 minutes in Hong Kong on February 15, 2015. (Photo by SUNIL PRADHAN/Anadolu Agency/Getty Images)
MUNICH, GERMANY - NOVEMBER 30: Guiness World Records adjudictor Seyda Subasi-Gemici hands over the Guinness World Record certificate for scoring the fastest five goals in a football match to Robert Lewandowski during a press conference at Saebener Strasse training ground on November 30, 2015 in Munich, Germany. (Photo by Lennart Preiss/Bongarts/Getty Images)
Up Next