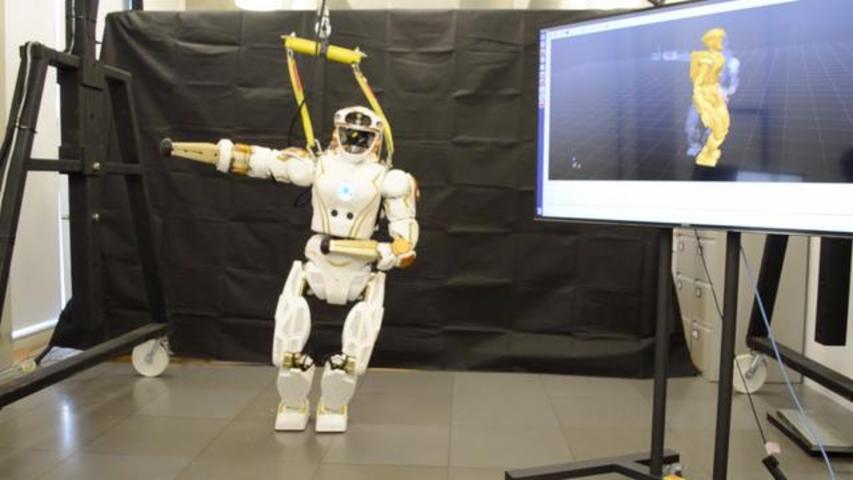 A joint effort between NASA and the University of Edinburgh aims to put a human-like robot on Mars.

A press release by the University of Edinburgh notes, "Currently, the humanoid machine can walk on two legs and perform basic movements, such as holding and manipulating objects. Researchers will work to give the Valkyrie a much more sophisticated set of skills, enabling it to better understand and respond to its surroundings."

In particular, scientists hope to expand Valkyrie's handling and walking abilities, improve the robot's understanding of its surroundings and maneuverability, and refine its ability to work in close—and safe—contact with humans and other machines.

The release further notes, "The Valkyrie is the only robot of its type in Europe, and one of three prototypes in the world. NASA hopes to equip the Valkyrie to go to the Red Planet many years before astronauts are able to make the journey..."

Professor Sethu Vijayakumar, Director of the Edinburgh Centre for Robotics,said, "Valkyrie is a huge scientific undertaking. We are looking forward to tackling the many technical challenges involved in developing a large-scale humanoid robot, and pushing the state of the art in humanoid robotics."

29 PHOTOS
Discoveries about Mars, including signs of water
See Gallery

This Jan. 19, 2016, self-portrait of NASA's Curiosity Mars rover shows the vehicle at "Namib Dune," where the rover's activities included scuffing into the dune with a wheel and scooping samples of sand for laboratory analysis.

The dark, narrow streaks flowing downhill on Mars at sites such as this portion of Horowitz Crater are inferred to be formed by seasonal flow of water on modern-day Mars. The streaks are roughly the length of a football field.

These dark features on the slopes are called "recurring slope lineae" or RSL. Planetary scientists using observations with the Compact Reconnaissance Imaging Spectrometer on the same orbiter detected hydrated salts on these slopes at Horowitz Crater, corroborating the hypothesis that the streaks are formed by briny liquid water. (Photo by NASA/JPL-Caltech/Univ. of Arizona)

Recurring slope lineae (RSL) are active flows on warm Martian slopes that might be caused by seeping water. One of the most active sites known on Mars is in the central peaks (uplifted mountains of deep bedrock) of Hale Crater.

This image shows RSL extending downhill from bedrock cliffs, mostly towards the northwest (upper left). This image was acquired in middle summer when RSL are most active in the southern mid latitudes.

The RSL in Hale have an unusually "reddish" color compared to most RSL, perhaps due to oxidized iron compounds, like rust. Since HiRISE color is shifted to infra-red wavelengths, they are actually especially bright the near-infrared just beyond the range of human vision.

(Photo by NASA/JPL-Caltech/University of Arizona)
This low-angle self-portrait of NASA's Curiosity Mars rover shows the vehicle above the "Buckskin" rock target, where the mission collected its seventh drilled sample. (Photo via NASA)
The HiRISE camera aboard NASA's Mars Reconnaissance Orbiter acquired this closeup image of a "fresh" (on a geological scale, though quite old on a human scale) impact crater in the Sirenum Fossae region of Mars on March 30, 2015. This impact crater appears relatively recent as it has a sharp rim and well-preserved ejecta. (Photo by NASA)
Seasonal frost commonly forms at middle and high latitudes on Mars, much like winter snow on Earth. However, on Mars most frost is carbon dioxide (dry ice) rather than water ice. This frost appears to cause surface activity, including flows in gullies. (Photo via NASA)