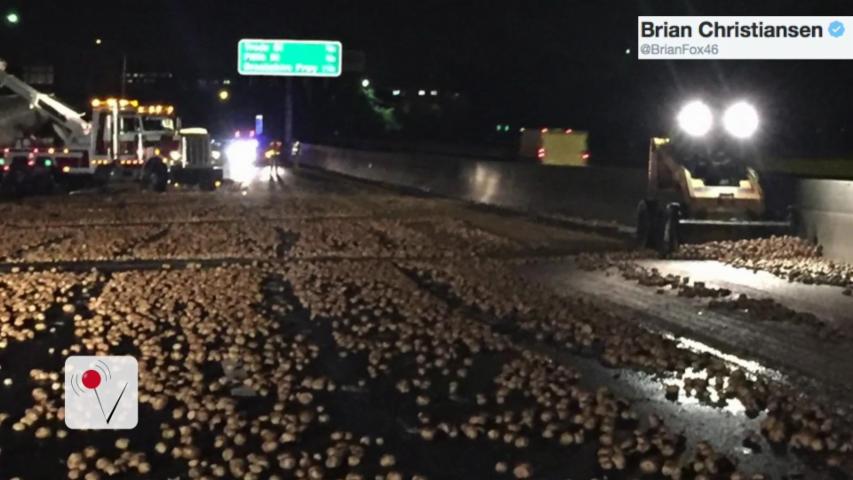 By: Amanda Kabbabe and Shannon McDonald

In North Carolina, however, a highway was backed up thanks to over 50,000 potatoes rolling on the roadway.

A truck driver was carrying the load of potatoes when fell asleep at the wheel. His truck hit the barrier wall and overturned, which spilled the spuds all over the highway.

The carb overload backed traffic up from around 2 am to about 8:30 am.

Clean-up crews were so overwhelmed, they had to call in snow plows to help shovel the mess.

The driver was taken to a hospital, and luckily, he only sustained minor injuries. Unfortunately, the same can't be said for the potatoes.

See more from the accident scene:

North Carolina crash turns 50,000 pounds of spuds into mashed potatoes
The cleanup process begins after an overnight accident that caused thousands of potatoes to spill along I-77 S. https://t.co/hgYR9fVqM4
Still a huge mess here on I-77 S as crews clean up from an overnight crash. Anyone for potatoes this morning? https://t.co/NqjtSGJrII
VIDEO: crews putting oil absorbent on roads. They told me the potatoes are covered in diesel fuel, oil @TWCNewsCLT https://t.co/LSINncz7oE
VIDEO: crews cleaning up the spuds. Happy FRY- yay! 🍟 @TWCNewsCLT https://t.co/naRyS39LRA
Up Next