A wet and stormy Mother's Day is ahead in Plains, West and Northeast 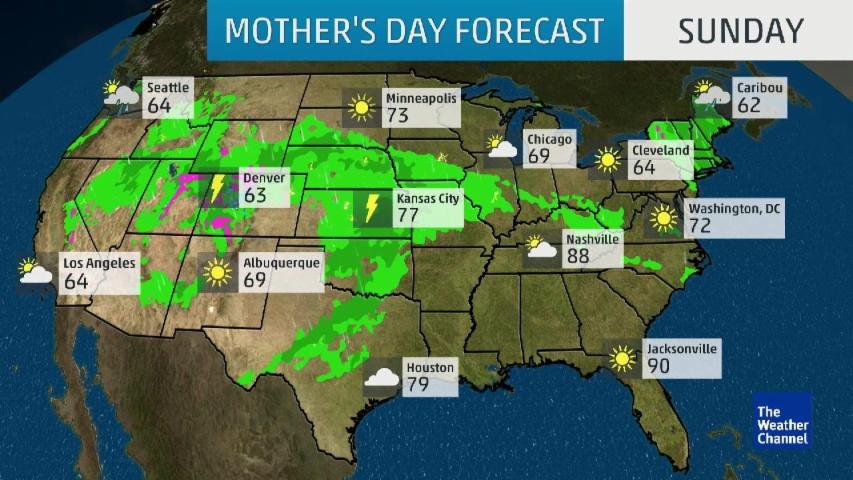 Mother's Day is almost upon us and some of you will see wet conditions, along with the risk for severe weather, while others will likely enjoy a beautiful day.

Below we break down the forecast by region and take a peek at where there could be some weather related travel problems.

A stubborn, slow-moving trough of low pressure will keep rain showers in the forecast from the eastern half of New York into New England. Conditions, however, will begin to improve Sunday evening. Otherwise, much of the interior Northeast and Mid-Atlantic will see a dry day.

Temperatures will be a bit cool, with highs generally near to slightly below average. Highs will reach the 50s and 60s across the region, with a few lower 70s in parts of the Mid-Atlantic. It will also be breezy, which will make it feel even cooler.

A ridge of high pressure will keep the vast majority of the South dry and mostly sunny. Some spotty showers are possible from Kentucky to Virginia. A few strong to severe thunderstorms could erupt from central Texas into Oklahoma.

High temperatures for the region will near average, while portions of the Southeast will see above-average temperatures. Most locations will see highs climb into the 80s.

A potent storm system will migrate into the Plains and it will trigger thunderstorms, mainly from Nebraska into Missouri and southward through Kansas. Some thunderstorms are likely to turn severe with large hail and damaging winds. An outbreak of tornadoes is not expected but a few tornadoes are possible.

Temperatures will be close to average for this time of year, with highs typically in the 60s and 70s, while a few 50s are possible in the Upper Peninsula of Michigan. Winds will also be gusty at times in the Plains.

A strong weather disturbance will push eastward into the Rockies, triggering showers and thunderstorms across a large part of the Intermountain West. A few showers can also be expected in parts of western Washington and Oregon.