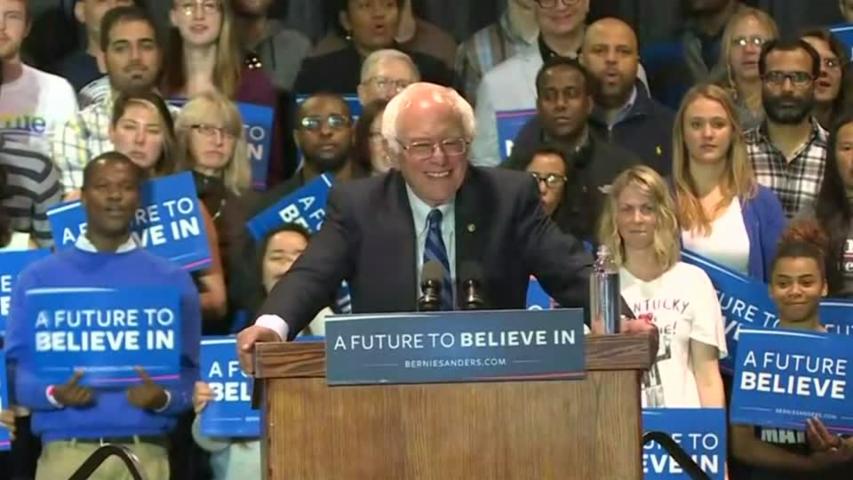 Even with Bernie Sanders' surprise victory in Indiana's Democratic primary Tuesday night, his chances of securing the nomination are still extraordinarily low. They've been bleak for weeks, and unless Sanders starts winning nominating contests by crushing margins, they will continue to dwindle.

A number of political journalists have recognized this for some time, and have taken to writing anticipatory campaign obituaries summing up his legacy. The conventional focus of these evaluations is around how much Sanders has energized the left and sparked a movement that has united young people and more left-leaning Democrats around social democratic concepts such as single-payer health care and free public higher education. The biggest questions tend to swirl around whether his insurgency will evolve into a meaningful programbeyond this moment.

Read more: Donald Trump and Bernie Sanders Have This One Surprising Thing in Common

But Sanders' ascent and astonishingly powerful challenge to Hillary Clinton has also highlighted and in some ways deepened rifts between various factions of the left. There is nothing new about impassioned disagreement on the left, and considering that the two candidates held such sharply divergent views of the meaning of progress, substantial clashes were inevitable. Yet a significant amount of the conflict has been over issues that go beyond straightforward differences on policy visions, and also show signs of lingering, if not potentially spreading, beyond this campaign cycle.

Whom do you present? The lion's share of the strife can be traced to the identity politics of the Sanders movement. From Sanders' deep struggle to garner the support of black voters, to heated disputes over whether it's fair to describe the archetypal Sanders supporter as a "bro," to allegations that Sanders used subtly gendered attacks against Clinton, the Sanders camp has been dogged by accusations of building a movement whose energy and appeal have skewed toward white men.

The bulk of those criticisms have come from Clinton supporters and what could be called identitarian progressives — liberals who place concerns about oppression tied to race, gender, sexual orientation and gender identity at the center of their analysis of society's power dynamics — contending that Sanders' concern with class inequality has eclipsed other key imbalances in American society.

Many of those criticisms have been unfair and operated off of crude generalizations about Sanders' following rather than facts. But still, some critiques of his struggle to be inclusive have touched on something real. Sanders' self-described political revolution has not been able to captivate voters ofcolor, and with a few exceptions, Clinton is winning among women across Democratic nominating contests.

Sanders has squandered some opportunities to build a leftist coalition suited to American demographics and political culture.

It wouldn't be right to characterize all of this as Sanders' failure — Clinton is one of the most powerful figures in American political life, and this has been her race to lose — but it's evident that he hasn't been able to break through with constituencies that would, theoretically, be naturally drawn to a movement whose central conceit is tackling persistent inequality. On some counts, Sanders has squandered crucial opportunities to build a leftist coalition suited to American demographics and political culture.

Sanders' weakness with black voters is a vital lesson. Perhaps biggest thorn in Sanders' side this race has been his consistent unpopularity with black voters, and his management of the issue is key to understanding his broader shortcomings with multicultural outreach.

It could be argued that a significant share of the black vote was almost unwinnable for Sanders — the Clintons have a powerful relationship with the nation's black political class and black community that stretches back for decades, while Sanders has represented a small, almost uniformly white state for his entire career in national politics. But if Clinton had such a formidable advantage with black voters from the off, that's all the more reason for Sanders to have devoted extra energy to winning them over from the time he launched his campaign. Instead, he showed little interest in it.

The low-hanging fruit available from the very beginning of the presidential campaign cycle in 2015 was to embrace the explosively growing Black Lives Matter movement. It was a no-brainer for a politician who had engaged in civil disobedience during the civil rights movement and whose run for the White House was predicated on challenging the status quo on behalf of marginalized Americans. It also would've positioned him to strike Clinton immediately on her tough-on-crime record and troubling rhetoric referring to some black youth as "superpredators."

But Sanders didn't embrace the criminal justice reform movement until he was pushed to do so. And he wasn't the first politician in the race to say "black lives matter." Clinton was.

Sanders' disinterest in doing inventive or bold things to pique the interest of black voters was a consistent pattern. The public relationship he built with Atlanta rapper Killer Mike was a colorful, if slightly gimmicky way, to attempt a connection with black voters. But it stands out mainly because it served as an exception to the rule — for the most part, Sanders did little more than make token efforts in the run-up to the South Carolina primary, the first Democratic nominating contest with a large share of black voters, to go above and beyond minimal obligations to forge a relationship with black voters.

.@KillerMike and @BernieSanders sit down for a coke at Atlanta's Busy Bee's cafe pic.twitter.com/P3HtCwcTsu

The issue wasn't that Sanders didn't care about black voters, but that he held the view that his aggressively progressive policies on issues like health care and education and jobs programs, which would disproportionately better the lives of black Americans, would be enough. In some ways, this seems to be a deeply honest approach to winning over voters — using policy rather than symbolic gestures to appeal to specific groups.

But getting elected isn't just about policy. It's also about building trust — both by conveying your understanding of the unique needs of different communities and by establishing why you can credibly claim to delivering changes on their behalf. For someone like Sanders, whose political projects are premised on the idea of universalism — universal health coverage, universal free education, and so on — the idea of very particular conversations and relationship-building don't come naturally. But using careful language that speaks to specific grievances and interests is a crucial way to do that.

Beyond black voters: Appealing to Latino voters (with whom Sanders has done much better with than black voters, even as he's lost them to Clinton in key states) and women, Sanders also relied on the idea that the promise of robust social democratic policies would alone be enough to pull people to his campaign. Again, the issue isn't indifference, but rather a reliance on the idea that what he said his programs could deliver would be inherently seductive.

But it hasn't been. And if there's a lesson in all this for Sanders or any others who carry his torch, it's that targeting demographic groups with nuanced, community-specific relationship-building and messaging is important, even if your political program relies on the idea of universal rights. The United States is a multicultural democracy, and any attempt to pursue power within it, at least for those on the left, requires a serious reckoning with that reality.

Among young people — with whom Sanders enjoys extraordinary, almost unrivaled popularity within the Democratic electorate — his appeal cuts across gender and race, and that bodes well for the future of his movement. But if someone is to take Sanders' movement further, it involves finding a way to make it more attuned to the extraordinary diversity of American life.

More from Mic.com:
Go to TedCruz.com Right Now For the Perfect Last Word on His Candidacy
Republicans Are Burning Their Voter ID Cards in Protest of a Donald Trump Nomination
1 Chart Shows Why Democrats Should Be Very Nervous About November