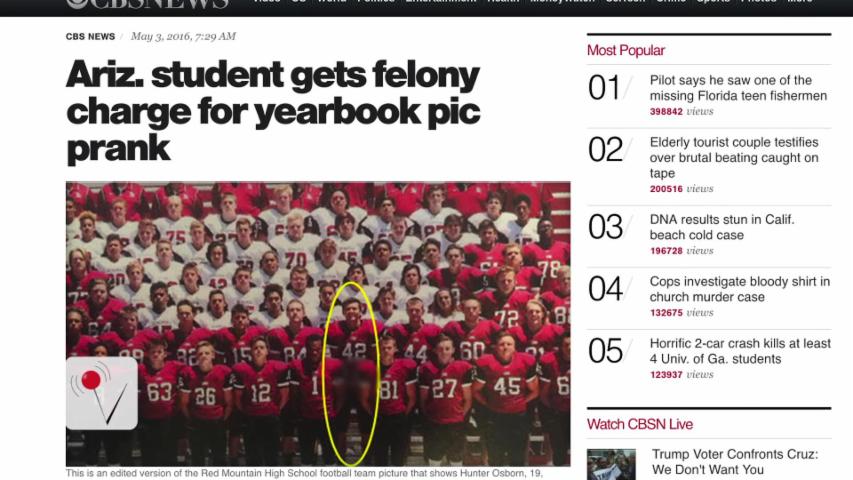 Hunter Osborn, the high-school football player who exposed himself in the team's yearbook photo, is in the clear.

The Mesa Police Department has dropped all 69 charges of indecent exposure against the 19-year-old.

The charges accounted for each person present when the photo was taken. Osborn was also facing a felony charge of providing harmful items to minors.

Osborn said he exposed himself through the top of his uniform's waistband after his teammate dared him to do so. The prank initially went unnoticed for months.

He admitted he regrets his decision, saying he was "disgusted with himself."

RELATED: Reactions to the stunt on social media

The school had to recall 250 copies of the yearbook, which were in possession of minors, to censor the photo.

Students and members of the community supported Osborn through the ordeal, insisting the stunt was nothing more than a harmless prank. They also pointed out that the blurred photos publicized by the media made the photo look worse than it actually was.

A petition, which argued the school should responsible, not Osborn, gained more than 6,000 signatures.

Osborn told a local ABC affiliate he's "blessed" and "thankful" for everyone who has supported him.

It's probably safe to say Osborn will think twice before he accepts his next dare.

More from AOL.com:
Yearbook prank leads to felony charge for teen
Alligator strolls up to house, tries to ring the doorbell
Drug-sniffing dogs no longer just for airports