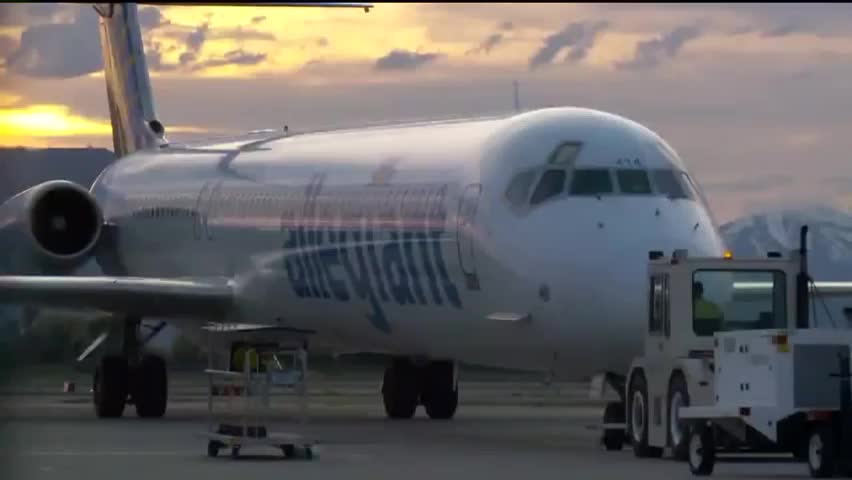 PROVO, Utah (KSTU) -- A California couple said they were kicked off their flight out of Provo after telling a flight attendant their son has a peanut allergy.

Kyson and Sara Dana said they were flying out of Provo Monday afternoon and were heading to Oakland, California. The couple and their two-year old son, Theo, call the Bay Area home.

SEE ALSO: Delta has an unknown program to take some stress out of flying

In a Skype interview on Wednesday, Kyson Dana said as they stepped through the door, his wife alerted the flight attendant to Theo's allergy.

The couple told FOX 13 News Theo had just gone into anaphylactic shock over the weekend before their flight after accidentally ingesting an almond. They said they were armed with an epinephrine pen, which is used to help those with severe allergies, and wipes to sanitize their seats against traces of nuts.

He said the Allegiant flight attendant immediately told the couple that she didn't recommend they fly on the plane.

"My wife said, 'We're obviously flying on the plane, and we recognize the risks. We have an EpiPen with us,'" he recounted.

Dana said they continued on to their seats, put off by the interaction and flight attendant's apparent attitude. They wiped their seats down with the sanitation wipes and got settled in. A second flight attendant, Dana said, came up and asked passengers around them to avoid eating peanuts and everyone agreed to it.

"And it seemed like the situation was resolved," he said.

But a few minutes later, he said, "A third flight attendant comes to us and says, 'We've spoken to... the pilot, and we are going to have you removed from the plane.'"

Dana said the flight team told the family they consulted with a medical professional, and decided it wasn't safe to let them fly. The three unloaded from the plane, missed their flight home and wondered why the airline took such serious measures.

"I think they were being unreasonable," said allergist Dr. Kay Walker, about Allegiant Air.

An American Board of Allergy and Immunology Certified allergist, Dr. Kay said hearing the story as the couple relayed it, also left her surprised. Dr. Walker said it's safe to fly with a peanut allergy, as long at the passenger and their family take the right precautions.

She recommends passengers alert the airline, wipe the seat area down with sanitation wipes, and avoid eating airline food.

"The odor of peanut will not harm you," she explained. "The dust, when it settles, could possibly harm you--even though that is also rare."

Though she doesn't know the exact situation, she said it appeared the family took the same steps she advises her clients to take.

FOX 13 reached out to Allegiant Air, and a representative said they are looking into the situation and will reach back out when there is more information.

The Dana family said they complained and Allegiant sent them this response that said in part:

"On behalf of the entire Allegiant team, please allow me to offer my sincere apology for the inconveniences this incident has caused for you and your family. We regret that you were denied boarding due to any misunderstanding regarding the severity of your child's peanut allergy. I realize that medical issues can be highly challenging. We just wanted to make sure you arrived home safely."

The Dana family said, even with the apology, they would like to see policy changes when it comes to how those with allergies are treated on flights.

In the end, the family did make it home safely. They said a generous Provo Airport worker secured them a new flight at no cost and with a different airline, then personally drove them to the Salt Lake City International Airport to fly home.

More from AOL.com:
Shop these videos: 14 best-selling products to pack for a stress-free vacation
10 desserts around the world that'll cost you over $1,000
Krispy Kreme is giving you free food today