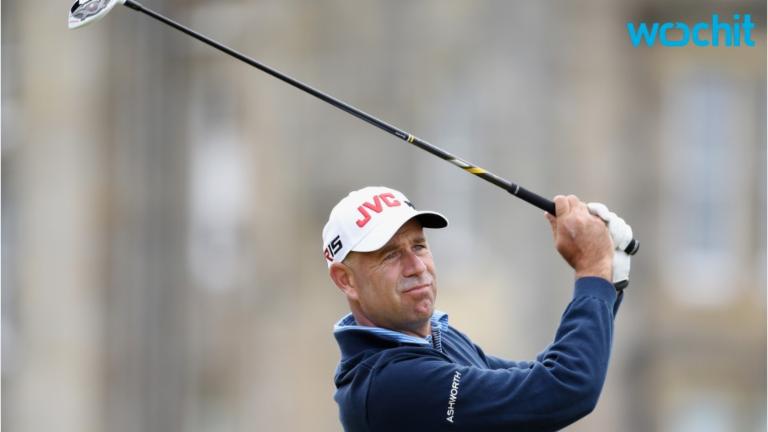 Pro golfer Stewart Cink says his wife Lisa has been his "biggest supporter" since their teenage years.

"It's now time for me to return the favor," Cink adds.

The PGA Tour pro is quitting golf indefinitely to support Lisa, who has been diagnosed with breast cancer.

Cink pulled out of the Wells Fargo Championship this weekend and will remain away from the game for an undetermined length of time as Lisa undergoes treatment. He announced the news — and his intention to stay by Lisa's side — via Twitter.

See Cink throughout his career:

Golfer Stewart Cink quits PGA Tour to support wife Lisa after breast cancer diagnosis
Jan 16, 2016; Honolulu, HI, USA; PGA golfer Stewart Cink tees off on the 11th hole during the third round of the Sony Open in Hawaii golf tournament at Waialae Country Club. Mandatory Credit: Brian Spurlock-USA TODAY Sports
Stewart Cink of the U.S. looks at his birdie putt on the first hole during the first round of the WGC Bridgestone Invitational PGA golf tournament at Firestone Country Club in Akron, Ohio, August 4, 2011. REUTERS/Matt Sullivan (UNITED STATES - Tags: SPORT GOLF)
Stewart Cink of the U.S. hits out of a bunker onto the 15th green during the first round of the British Open golf Championship at Muirfield in Scotland July 18, 2013. REUTERS/Brian Snyder (BRITAIN - Tags: SPORT GOLF)
Defending champion Stewart Cink of the U.S. hits his tee shot on the second hole during second round play at the British Open golf championship on the Old Course in St. Andrews, Scotland, July 16, 2010. REUTERS/Shaun Best (BRITAIN - Tags: SPORT GOLF)
Stewart Cink of the U.S. hits off the 14th tee during the second round of the U.S. Open Golf Championship in Pebble Beach, California, June 18, 2010. REUTERS/Hans Deryk (UNITED STATES - Tags: SPORT GOLF)
27 Jul 1997: Stewart Cink poses with the trophy after the Canon Greater Open at the TPC at River Highlands in Cromwell, Connecticut. Mandatory Credit: Craig Jones /Allsport
KAPALUA, HI - JANUARY 8: Stewart Cink makes a tee shot on the second hole during the third round of the Mercedes Championships on January 8, 2005 at the Plantation Course in Kapalua, Maui, Hawaii. (Photo by Robert Laberge/Getty Images)
UNITED STATES - MAY 25: Stewart Cink during the First Round of the Fedex St. Jude Classic on May 25, 2006 at TPC Southwind in Memphis, TN. (Photo by Joe Murphy/Getty Images)
Stewart Cink talks to the press at Torrey Pines Golf Course, site of the Buick Invitational, after third-round play February 14, 2004. Cinbk finished 12 under par in second place heading into Sunday's final. (Photo by A. Messerschmidt/Getty Images)
UNITED STATES - OCTOBER 19: U.S. player Stewart Cink during competition at the 2000 Presidents Cup at Robert Trent Jones Golf Club in Prince William County, Virginia . (Photo by PGA TOUR Photo Services/PGA)
3 Aug 2000: Stewart Cink is looking on during The International Presented By Quest at the Castle Pines Golf Club in Castle Rock, Colorado.Mandatory Credit: Brian Bahr /Allsport
Stewart Cink waits to play during the first round at the 2007 Arnold Palmer Invitational at the Bay Hill Club and Lodge in Orlando, Florida. March 15, 2007. (Photo by Pete Fontaine/PGA)
Up Next

Cink has won six PGA Tour events in his career. He tied for third place at the 2008 Masters and memorably won the Open Championship in 2009. He's also a five-time member of the American team at the Ryder Cup.

Here's his full statement about stepping away from the sport.

Best wishes to the Cink family.