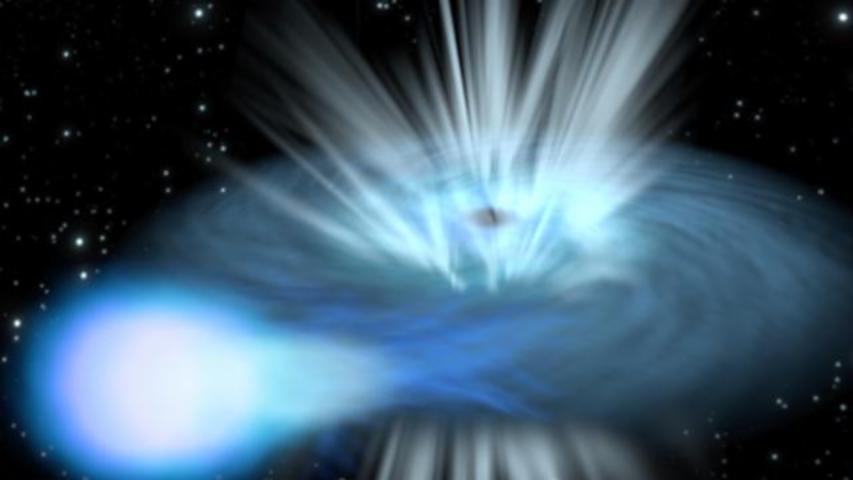 Winds nearly a quarter the speed of light have been observed emanating from two ultra-luminous x-ray sources in neighboring galaxies.

Those x-ray sources are believed to be black holes feasting on their companion stars at a rate far beyond traditionally understood limits.

Writing in the journal Nature, researchers from the University of Cambridge used data gathered from the European Space Agency's XMM-Newton space observatory to delineate the massive strength of the mysterious x-ray sources and the awesome speed of the fierce galactic winds.

Dr. Ciro Pinto, the paper's lead author, said, "This is the first time we've seen winds streaming away from ultra-luminous x-ray sources. And the very high speed of these outflows is telling us something about the nature of the compact objects in these sources, which are frantically devouring matter."

Indeed, when looking at the universe through the x-ray field, two celestial phenomena predominate: supermassive black holes and binary systems. But what's causing the wind is thought to be something in between.

Dr. Pinto noted, "We think these so-called 'ultra-luminous x-ray sources' are special binary systems, sucking up gas at a much higher rate than an ordinary x-ray binary. Some of these sources host highly magnetised neutron stars, while others might conceal the long-sought-after intermediate-mass black holes, which have masses around one thousand times the mass of the Sun. But in the majority of cases, the reason for their extreme behaviour is still unclear."

More from AOL.com:
New images give clearer look at lost Beagle 2 Mars lander
The northern US might see a rare aurora borealis
Starbucks slapped with $5M lawsuit over too much ice