WGN investigates the Boeing Papers: How safe is the air up there? 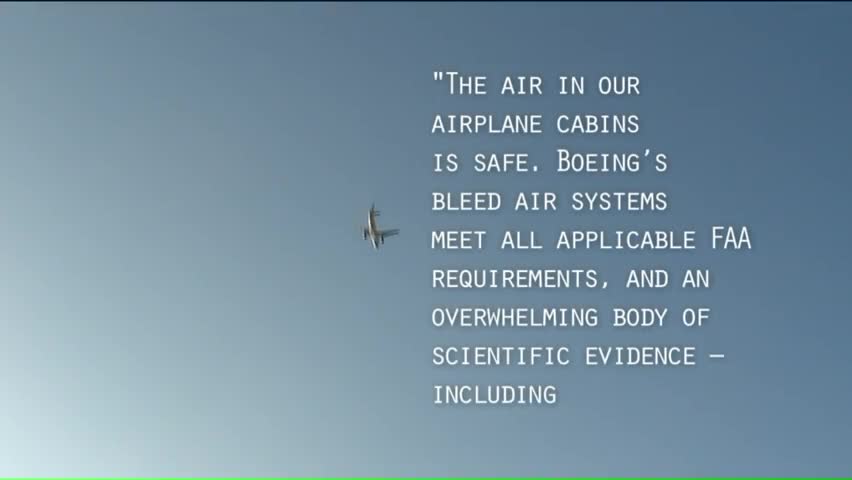 (WGN) -- Millions of people get on and off planes every day without ever noticing a thing.

But while flying, have you ever gotten a whiff of a nasty smell, which might have burned the eyes, made the throat sore, left you dizzy, with a headache or even disoriented? You're about to hear exactly what that might have been. And it's not good. It may be toxic. It's what one lawsuit calls a dirty little secret of the commercial airline industry. It's hidden in what we call the Boeing Papers. A WGN investigation uncovered emails, documents and research that every flying passenger should see.

While hundred ton planes crisscross the sky today, go back to a time when it wasn't always so.

Back in the day, Boeing proudly promoted the maiden flight of its new 747 Super Jet. But well before that marvel took off, documents show Boeing knew a design feature was already an engineering headache.

It's called the "bleed air system." Outside air is sucked through the engine and in effect bled off, diverted to the cabin and recirculated with air passengers are already breathing.

It could be a flaw in the system.

See more from this investigation:

A 1953 report from Boeing on the air contamination problem, along with a handful of other industry reports, show the harmful potential when heated toxic jet engine oil can seep into cabin air.

When it goes wrong and oil leaks, airplane cabin air smells sort of like a dirty, wet sock, burnt oil or glue. Maybe you've smelled or seen the smoke in the cabin.

Here's what important: It is still happening six decades later.

Sean Gamble is one of a group of attorneys suing Boeing. Two cases were filed in two years in Chicago. One of them was filed a couple of weeks ago.

"Boeing knows, but will do nothing about this problem," Gamble says. "There have been warnings, a number of warnings, not just by industry insiders and engineers, but by medical doctors, others working outside the industry, trying to sound the alarm. And up to this point, Boeing isn't listening."

One case goes back to the summer of 2013. An Alaska Airlines flight took off from Boston for San Diego. The plane had to be diverted to Chicago after all four flight attendants became violently ill. Two passed out. When they recovered, each suffered headaches, blurred vision and memory loss. For one flight attendant, the problems are still so severe she lives permanently with her mother.

"Since the flight I have struggled with migraines that are daily," Escobedo says. "The level of pain varies, but they are every day. Dizzy, occasionally nausea. I still have blurry vision. And, I struggle with memory problems, really bad difficulty concentrating."

Her story started at the SeaTac Airport in Washington state on a round-trip flight on Alaska Air between Seattle and Austin flying on new Boeing plane --just weeks old.

It was to be a smooth easy flight until 45 minutes in when Vashti and the other flight attendants suddenly became sick.

"I said, 'You guys I don't feel well. I have this horrible headache in my forehead and I'm really dizzy. I think I'm going to throw-up.' And they said 'We all feel the same way.' And then I got scared. I knew something was really wrong."

Not only did the crew fall ill, a passenger did as well.

"By the time I got to her, her head was slumped forward. She was not responsive. We had to put her on oxygen," Escobedo says.

An in-air emergency hot-line was called.

She said they were met by paramedics. "They checked us all out," she says. "And the crew wanted to return to Seattle instead of going to the emergency room. The pilot taking us back to Seattle felt that I was not fit to do the job. (He said) 'You cannot fly.'"

She insisted on flying back home, if only as a passenger. But on that return trip to Seattle, on the same plane, once again, there were more problems after it was airborne.

First it was one passenger on an Alaska Airlines flight who got sick, then another and another.

No one from Alaska Airlines would comment beyond a voice message saying they are not a part of the current lawsuit.

WGN Investigates wanted to sit down with Boeing to talk about the history of the problem of "bleed air," but no one would agree to an on-camera interview.

Instead, the company issued a statement saying:

This lawsuit resurrects a series of old and discredited claims about the quality of Boeing's cabin air, and our position on this issue has not changed.

Despite what Boeing tells us publicly a 2007 email from the company's own environmental controls department discusses pilots complaining of a blue smoke and unknown by-products of hot turbine oil. Adding with apparent frustration about the company, "Bottom line is I think we are looking for a tombstone before anyone with any horsepower is going to take interest."

"And we have tombstones," Gamble says. "And that still hasn't made a difference."

Looking at cases as far back as 1970, military medical researchers concluded: "Smoke/fumes in the cockpit is not a rare event and is a clear threat to flying safety because of acute toxic effects."

"It's sad. I don't know how to explain this level of inertia. Or, indifference to the safety of passengers, the safety of crew," Gamble says.

Once home, flight attendant Escobedo ended up in the ER.

"(They) told me that the carbon monoxide level in my blood was severely elevated," she says.

"These cases are about our safety and the safety of our loved ones. Toxic air should not be a cost of air travel," Gamble says.

Every plane design in Boeing's history except the new Dreamliner has had a "bleed air" problem.

Boeing engineered a different air system for the Dreamliner while continuing to build its other planes the old way. Still, Boeing is not the only manufacturer facing toxic air complaints.

So too is the French made Airbus.

In England, a recent a House of Commons debate raised questions after a flight crew member died. Before that toxic chemicals were found in the body of second person, a pilot who died. Then a cockpit crew missed calls from air traffic control because fumes allegedly knocked them out. All worked for British Airways that use a mix of Boeing and Airbus planes.

"Our understanding is this is happening as often as once per week in the United States," Gamble says.

Documents show despite congressional inquiries the FAA has done little. Its latest report says to investigate potential toxic contamination would take a lot of money that it doesn't have.

When we asked, a FAA spokesperson told us, no one would ever be available for an on-camera. Instead WGN Investigates got this statement:

Studies have indicated that cabin air is as good as or better than the air found in offices and homes.

READ THE FULL STATEMENT FROM THE FAA HERE

Still, that FAA response misses emails like a 1997 Alaska Airlines email WGN Investigates obtained. The email complained, hydraulic mist leaked into the cabin air. Then, similar to the canary in the mine, Alaska policy was to send in pilots before passengers to give the sniff test.

Other documents show a number of fixes exist, special filters and sensors.

"It costs a little bit of money," Gamble says. "But it can save any number of lives, their well-being, whether its passengers or crew members."

WGN Investigates learned some crew members are taking action on their own.

American Airline flight attendants have with them a union card which gives directives if they smell toxic cabin air. Yet, you the passenger haven't been told a thing about this.

"The public should be concerned," Gamble says. "And we should demand that changes be made to make air travel as safe as we expect it to be. Passengers have a right to clean air."

It's been a little more than eight months and Vashti and her husband say she still has memory lapses.

In addition to the the two lawsuits we just talked about, we know of another lawsuit filed against Boeing since 2011 in the U.S.. That case was sealed.

However, in Britain , there were 17 lawsuits recently filed against airbus alleging toxic air complaints.

WGN investigates the Boeing Papers: How safe is the air up there?