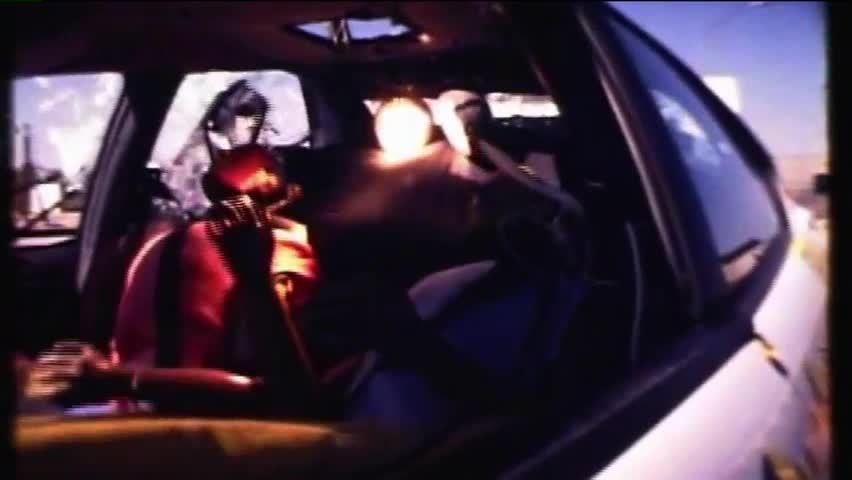 DENVER (KDVR) -- There's a good chance you are driving with a hidden danger and you don't know it: Driver and passenger seats that break after a minor crash, striking the children sitting in the back seat.

As parents, you're told the safest place for your child is in a car seat in the back. But what you don't know about your front seats could seriously injure or kill them.

SEE ALSO: This Utah mom did CrossFit until the day before she delivered her baby

The FOX31 Denver Problem Solvers have uncovered 100 cases in which children across the country have died because of seat back failure.

"It was head trauma. The seat hit her in the face and that's what caused the brain bleed they couldn't stop," Liz Warner said.

Taylor was in her car seat when the Warners' 2010 Honda Odyssey was rear ended. The driver's seat collapsed on impact and struck Taylor in the face. She never regained consciousness.

"That was it. We didn't get to know her anymore," Liz Warner said.

After the Warners buried their baby girl, they realized they were not alone. According to the Center for Auto Safety, 898 children have been killed in rear-end collisions in the past 15 years, all of them sitting in the back seat.

The Problem Solvers dug up 100 lawsuits, blaming those deaths on seat back failures.

Crash test video shows what happens when a front seat breaks. The driver or passenger is thrust into the back, often delivering a fatal blow to the child behind him or her. Seat back failure has also caused hundreds of catastrophic injuries, to the people seated in the front.

"It's a bigger problem than most people think," said Jim Gilbert of the Gilbert Law group in Arvada.

Gilbert has won lawsuits against automakers across the country and said seat back failure has happened in almost every make and model.

"There is no testing available to the consumer that allows them to know how safe or unsafe there vehicle is," Gilbert said.

"Typically, these seats contain hidden dangers that you only discover when it's too late," Gilbert said.

He blames the problem on an archaic federal safety standard used to test seats.

"These safety standards, almost all of them have been in effect since 1971," he said.

The test is simple: A winch slowly pulls the seat back. If it doesn't break, it's good to go. Gilbert showed how a $5 lawn chair easily passed the test,.

"It's laughable how poor the safety standards are," he said.

What's worse, Gilbert claims, the automakers and National Highway Traffic Safety administration have known about the danger for decades. Gilbert said it would cost just a few dollars to fix the problem.

Using a seat that broke in a crash where the driver was paralyzed, Gilbert and his team of engineers reconfigured the design by adding a second stiffener or recliner on the right side.

And when Gilbert put the new seat to the test, "We found a significant increase in the strength of that seat. Safe for you, safe for your child in the back," he said.

"NHTSA has considered changes to its seating standards for years ... (but) ... rear-impact crashes account for roughly 3 percent of all traffic fatalities; fatal crashes in which seat failure occurs ... are even less common. ... The agency is required to perform cost-benefit analysis ... for any regulatory change we would propose," the NHSA said in a statement.

"When you do a cost benefit analysis like that and say, well only 100 people died, that's still 100 people," Colorado Congresswoman Diana DeGette said.

DeGette said the investigation and recent stories about seat back failure have opened her eyes. She said if the NHTSA fails to take action, Congress will.

It's the kind of action the Warners have been praying for.

"I'm committed to do doing this because my daughter is not going to die in vain. Because somebody was too cheap to fix a problem," Andrew Warner said.

"Our 4-year-old is just starting to grasp that he has a sister that he never met and he'll ask, 'Mommy, when is she coming back down from heaven to play with me?' Or we go to the cemetery and he'll say, 'I think I see her toes hanging from the clouds,'" Liz Warner said.

Until automakers start making stronger front seats or the NHTSA changes the testing standards, experts recommend placing a car seat in the middle, so if the front seat breaks, it doesn't hit the child. If there are two children in car seats, put the second seat behind the person in the family who weighs the least.

More from AOL.com:
Used car prices are falling for the first time in years
WGN investigates the Boeing Papers: How safe is the air up there?
Report: All 13 people presumed dead in Norway helicopter crash