A good year for one of the world's heaviest parrots 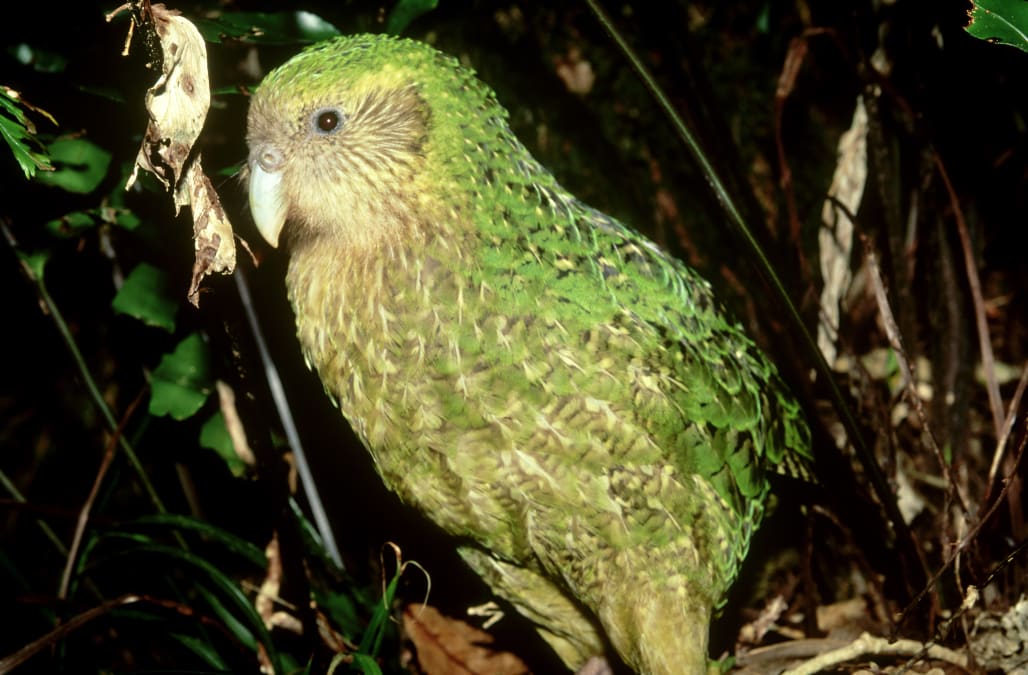 The last remaining kakapos, heavyset flightless parrots that only live in remote parts of New Zealand, got busy this year.

A total of 37 kakapo chicks have survived so far in 2016, signaling the most successful breeding season since conservation efforts began for the critically endangered species more than 20 years ago.

That baby boom is a much-needed boost for the 123 adult birds remaining.

"The future of New Zealand's own giant flightless parrot is looking much brighter," New Zealand Conservation Minister Maggie Barry said in a statement.

Centuries ago, kakapos were plentiful across New Zealand, but the introduction of predators such as ferrets and weasels led to their decline. By the 1900s, the green-feathered birds were thought be to extinct, but in 1970 about 40 kakapos were found on Stewart Island, just off the southern tip of New Zealand's South Island.

RELATED: 10 Unique Animals That Will Disappear With the Forests

Beginning in 1995, kakapos were transported to three predator-free islands, where the birds are monitored. The last egg hatched April 8, and all the hatchlings will be checked and weighed regularly until they fledge from the nests at about 10 weeks old.

They won't be added to the official kakapo count until six months after their birth, said Barry.

This year marked the first time successful hatches took place on all three islands, as kakapos are notoriously picky breeders, according to the New Zealand Department of Conservation. They only reproduce every two to four years, depending on the availability of fruit from trees—their primary food source.

Deidre Vercoe, the conservation department's kakapo operations manager, told The Guardian that improvements in remote-sensing data and monitoring equipment that allows for a more "hands-off" approach to kakapo management could be part of the reason for the successful breeding season.

"This is a turning point for us," she said. "These kinds of technological advances are enabling us to look after more kakapo in a non-invasive way, and as the population grows, these tools will be crucial."

Take the Pledge: Save Tigers, Apes, Sharks, and Other Endangered Wildlife

Check out some of the animals on the list of endangered species:

A good year for one of the world's heaviest parrots

Sumatran orang-utan Anita, 23, and her baby Atina, 1, eat a fruit at the unveiling of their new habitat in the Singapore Zoo July 31, 2007. The Sumatran orang utans are categorised as critically endangered with their population standing at approximately 7500 in the wild, according to Singapore zoological officials.

Two sand cats born on April 15, 2008 are pictured on April, 25, 2008 at the Amneville's zoo, eastern France. Sand cats are one of the smallest of the wild cats, ranging from Sahara in North Africa to the arid regions of Iran and Pakistan in West and South Asia.

This Mountain Pygmy Possum is part of a breeding program at Healesville Sanctuary, 10 March 2007.

Koola, an 18-year-old western lowland gorilla holds her newborn infant in her enclosure at Brookfield Zoo on November 6, 2013 in Brookfield, Illinois.

WINCHESTER, UNITED KINGDOM - SEPTEMBER 01: Amur leopard cubs pictured enjoying their day at Marwell Zoo on September 1, 2016 in Winchester, England. THESE leopard cubs are only nine weeks old but already a media sensation. Two Amur leopard cubs made their first public appearance at Marwell zoo near Winchester this morning. The creatures are amongst the most endangered big cats in the world and these two young boys are part of a program to protect the leopard's future.

Axolotls are seen in a cage where scientists of the Biology Institute of the National Autonomous University of Mexico (UNAM) are reproducing them at an experimental canal of Xochimilco in Mexico City February 13, 2014. Scientists at UNAM's Biology Institute have warned the Axolotl (Ambystoma mexicanum) or Mexican salamander, could be at risk of extinction in the wild in five to 10 years as axolotl populations were declining in 2003. But a few canals in the southern Mexico City suburb of Xochimilco, the only waterways where some axolotls may still live, are threatened by pollution caused by the city's continuous expansion and the days of the species in the wild are numbered. The axolotl is now on the endangered species list of the Convention on International Trade in Endangered Species (CITES).

A greater bamboo lemur is seen in this picture released by Conservation International on July 22, 2008. Researchers in Madagascar have found critically endangered greater bamboo lemurs living far from the only other place they were known to exist, raising hopes for the survival of the species, experts said on Tuesday.

A Dendrobates leucomelas frog is pictured at a terrarium in Caracas November 30, 2015. Venezuelan frogs and toads are in critical danger due to climate change as rising temperatures complicate reproduction and spread a deadly fungus, say scientists, who liken the species to canaries in a coalmine warning of imminent danger. The survival of a group of nearly 20 frog and toad species, which top Venezuela's list of endangered species, may rest on a small group of academics in a Caracas laboratory attempting to recreate the amphibians' natural reproductive conditions. Picture taken on November 30, 2015.

Seven months old 'Nuan Nuan', a female giant panda cub, plays inside the panda enclosure at the National Zoo in Kuala Lumpur, Malaysia on April 8, 2016. Nuan Nuan, which means 'friendship' in Chinese, was named in a ceremony where her name was picked from almost 23.000 suggestions coming from the Malaysian public.

Owabi, a two-week-old monkey cub of the Cercopithecus roloway family, one of the 25 most endangered primate species in the world, is pictured with its mother, Nyaga, on August 2, 2012 at the zoo in Mulhouse, eastern France.

An employee poses with an Egyptian tortoise during a photo call for Whipsnade Zoo's annual stocktake in Dunstable, Bedfordshire, north of London, on January 7, 2014.

This picture taken on November 8, 2016 shows Andatu, a Sumatran rhino, one of the rarest large mammals on earth, at the Rhino Sanctuary at Way Kambas National Park in eastern Sumatra. There are no more than 100 left on the entire planet and Andatu -- a four-year old male -- is one of the last remaining hopes for the future of the species. He is part of a special breeding program at Way Kambas National Park in eastern Sumatra that is trying to save this critically endangered species from disappearing forever.

A zoo keeper holds a baby Philippine crocodile during the annual weigh-in to record animals vital statistics at ZSL London Zoo in London on August 21, 2014.

The "Indian" or "Java" rhinoceros is listed as a critically endangered of extinction, this rare animal has only one horn which marks the main difference with the African type.

(Photo by Alex Borisenko/Biodiversity Institute of Ontario via Flickr)

A female Northern Bald Ibis, also referred to as Waldrapp, warms her nest while two fellows protect her at the zoo in St. Peter-Ording, Germany, on May 5, 2008.

A critically endangered small tooth sawfish roams its new home at Oceanworld in Sydney on August 18, 2011. Measuring over 1.5 metres in length, sawfish have adapted to live in both salt and fresh water, while their long saw-like rostrum (nose) has evolved to expertly forage for food under the sandy ocean floor.

A giant soft-shell turtle which is considered a sacred symbol of Vietnamese independence is guided into a cage for a health check by handlers at Hoan Kiem lake in the heart of Hanoi. Thousands of onlookers cheered in central Hanoi on April 3, 2011 when rescuers captured for treatment the ailing and ancient giant turtle. Legend has it that the turtle is the guardian of a magical sword once used in the 15th century to drive out Chinese invaders. Concern has mounted in recent months over the health of the animal likely to be over 100 years old and one of the last of a critically endangered species -- it is one of only four Rafetus swinhoei turtles known to exist in the world.

A Hypsiboas crepitans frog is pictured at a terrarium in Caracas November 30, 2015. Venezuelan frogs and toads are in critical danger due to climate change as rising temperatures complicate reproduction and spread a deadly fungus, say scientists, who liken the species to canaries in a coalmine warning of imminent danger. The survival of a group of nearly 20 frog and toad species, which top Venezuela's list of endangered species, may rest on a small group of academics in a Caracas laboratory attempting to recreate the amphibians' natural reproductive conditions. Picture taken on November 30, 2015.

Ema Elsa, a nine-year-old Black Rhino, lies next to her newborn calf in their enclosure at Chester Zoo in Chester, northern England October 5, 2012. The female calf which is less than 48 hours old will join an international breeding program for the critically endangered species.

Related stories on TakePart:
8 of the World's Most Unusual Forests
Ancient Forests Are Keeping Wildlife Cool as the World Warms
New Zealand's New Marine Reserve Is Twice as Big as the Country Itself