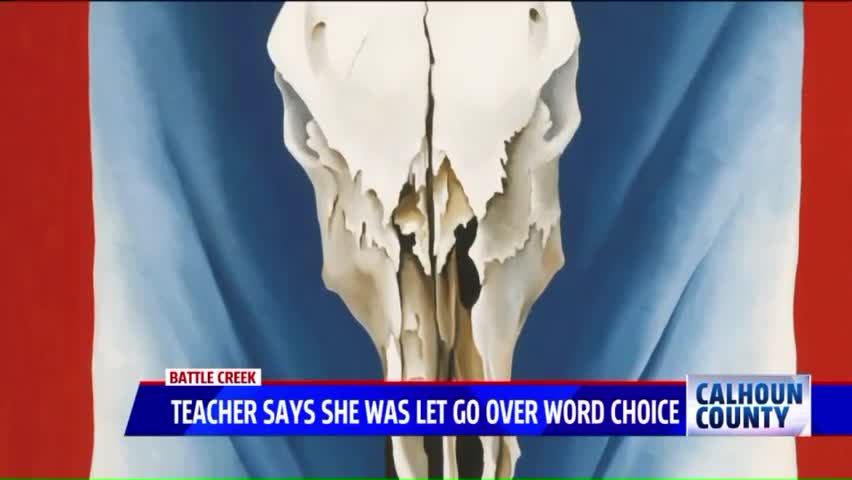 BATTLE CREEK, Mich. (WXMI) -- Vagina is the word substitute art teacher Allison Wint used in her class last Thursday. It's also the word that she said got her fired the next day.

"I was pretty flabbergasted," said Wint who's been teaching at Harper Creek Middle School since January. "I was really upset. I feel like I put a lot into the school."

Wint said she and her eighth graders were having a discussion about controversy and art. She held up a Georgia O'Keeffe painting, saying people have considered her work to be "pornographic" during her time. She wanted her students to understand what O'Keeffe may have been thinking and feeling when people criticized her work. They had a "productive" conversation about the artist and topic.

"I even considered using a euphemism during the lesson," said Wint. "But I felt like if I used a kind of joke word, or a word like vagoo or vajayjay or something like that, it would come off kind of silly, and I didn't want the lesson to be silly."

Wint, 24, said the following day she was told to clear out her office. She was shocked, having facilitated the same discussions in classrooms in Detroit for two years. She thinks the district took it too far.

"According to the policy, and according to the principal, and what she said to me was that I'm not allowed to say it in any capacity without prior approval, which I would've done had I known," said Wint.

Since her dismissal, Harper Creek Schools released a statement saying she was not fired but asked not to return to substitute teach for not following district curriculum. It also states that she was dismissed because of prior failures. Wint said she's not aware of any failures or wrongdoings. She always asked for feedback and was told she was fine.

"I am very sorry for any offense that I caused," said Wint. "It was just not something that I would have done had I known that it would cause offense. I would never have put my kids in that position."

Wint said she has received a lot of support from the school community, including parents, who have sent emails saying "Thank you" and that they "support" her no matter what happens. Wint was touched by the love and said it was harder to leave the students than the job.

"I'm not here to cause controversy," said Wint, who understands why she was let go. "I want to make my kids feel safe. I want them to have fun in my class, and I want them to learn about art. Those are my only goals."

More from AOL.com:
Bill Nye warns that a stunning natural wonder is turning into a 'Muddy Hillside'
Stars react to Prince's tragic death at 57
Coolest events in NYC during the Tribeca Film Festival