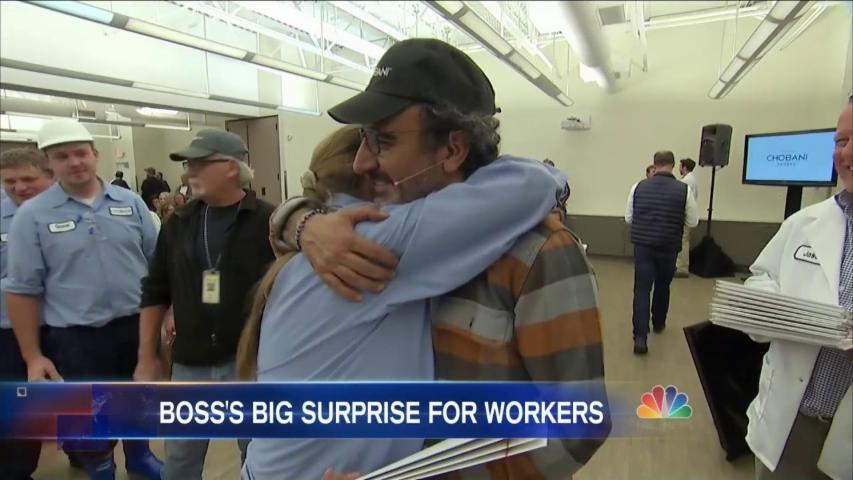 It's a great day to work at Chobani, that's for sure.

Chobani's staff, which spans over 2,000 employees, will all be granted an undefined share of a 10 percent stake in the company.

If you zoned in on the word "undefined," you aren't alone.

The distributed shares will not be equal, and are reportedly being distributed based on the amount of time an employee has been at Chobani, a company that highly values employee loyalty.

So when will employees know how much they're entitled to receive? Therein lies the catch.

Chobani needs to be accurately valued, something that can only happen if it's sold or if its shares are sold through stocks.

The New York Times estimated that if Chobani was worth roughly $3B (which is highly possible, granted the company raked in around $1.6B in 2015 sales), an average Chobani employee could cut a share of a nice $150K, with the longest-standing employees earning upwards of $1M.

These numbers are, of course, just speculative.

Chobani founder, Hamdi Ulukaya, explained the initiative in an announcement to his employees:

"This isn't a gift. It's a mutual promise to work together with a shared purpose and responsibility. To continue to create something special and of lasting value.. How we built this company matters to me, but how we grow it matters even more. I want you to be a part of this growth -- I want you to be the driving force of it."

Last year, Ulukaya formally pledged to give away half of his personal wealth throughout the course of his lifetime. As a Turkish immigrant himself, Ulukaya plans to put his funding towards helping other refugees.

Here's a look at other amazing CEO's that employees love:

More on AOL.com:
CEO who promised $70K salaries: 'I wasn't ready for the surge of attention'
Google CEO's pay tops $100 million
1 word that separates the best CEOs from the worst