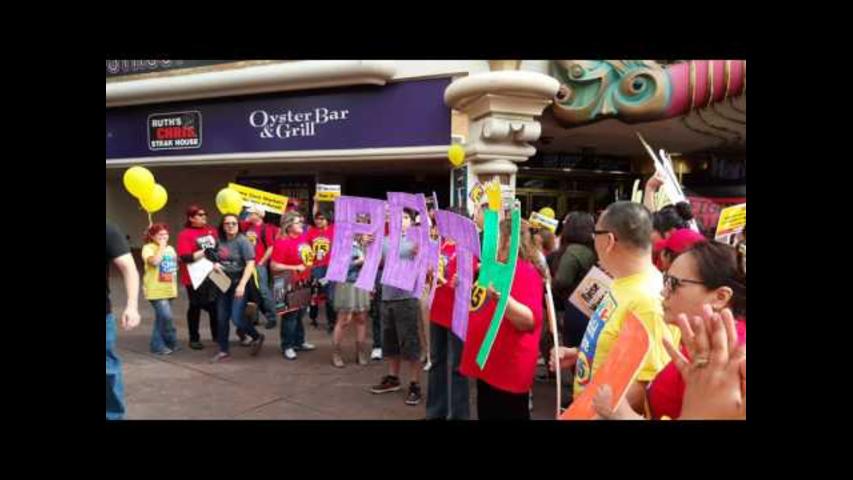 Former McDonald's CEO Ed Rensi, the chain's top dog in the '90s, has come out as the industry's latest $15-wage doomsayer, writing in a column for Forbes yesterday that if activist cities and labor organizers get their way, the consequences will be dire not for McDonald's as a company, but for the 840,000 hapless workers employed by the Golden Arches. "I can assure you that a $15 minimum wage won't spell the end of the brand," he writes. "However it will mean wiping out thousands of entry-level opportunities for people without many other options."

Rensi explains what that will look like, and to his credit (possibly because he's left the industry), he makes the chains look extremely cold and self-interested. A typical Mickey D's franchisee does $2.6 million in annual revenue, which, after operating costs and all of McDonald's sundry fees are deducted, leaves them with about $156,000 in profit. Rensi claims paying workers $15 an hour will erase at least three-quarters of that profitability, and leave only one viable option to franchisees who want the money back:

Recouping those costs isn't as simple as raising prices. If it were easy to add big price increases to a meal, it would have already been done without a wage hike to trigger it. In the real world, our industry customers are notoriously sensitive to price increases. (If you're a McDonald's regular, there's a reason you gravitate towards an extra-value meal or the dollar menu.) Instead, franchisees can absorb the cost with a change that customers don't mind: The substitution of a self-service computer kiosk for a full-service employee.

Then, in case people think he jests, he brings the scaremongering home:

In higher-cost European countries, these kiosks are already the norm. In 2011, the company ordered more than 7,000 of them to replace entry-level employees. They've been tested successfully in a number of markets in the U.S., and now the company is even testing self-serve McCafe kiosks where a customer can prepare and customize their own coffee beverage.

He concludes by adding that the Fight for 15 crowd has an ulterior motive of finally unionizing McDonald's gargantuan workforce. They're "unlikely to succeed" in that goal, Rensi predicts, but he's more than ready to credit them with the more dubious achievement: "You'll see their legacy every time you visit the Golden Arches, where 'would you like fries with that' is a button on a computer screen rather than a phrase spoken by an employee in their first job."

Former McDonald's CEO predicts a $15 wage will trigger massive layoffs
SAN FRANCISCO, CA - APRIL 22: Signs are posted on the exterior of a McDonald's restaurant on April 22, 2015 in San Francisco, California. McDonald's reported a decline in first quarter revenues with a profit of $811.5 million, or 84 cents a share compared to $1.2 billion, or $1.21 a share, one year ago. (Photo by Justin Sullivan/Getty Images)
Pedestrians walk past a McDonald's fast-food restaurant in Tokyo on January 9, 2015. A Japanese woman discovered fragments of 'dental material' in a McDonald's burger in 2014, the food chain said on January 9, the latest in a series of food contamination woes for the fast-food giant. AFP PHOTO / Yoshikazu TSUNO (Photo credit should read YOSHIKAZU TSUNO/AFP/Getty Images)
NOVATO, CA - DECEMBER 08: In this photo illustration, a McDonald's cheeseburger and fries are displayed on a table at a McDonald's restaurant on December 8, 2014 in Novato, California. McDonald's reported a worse than expected decline in November global same-restaurant sales. (Photo Illustration by Justin Sullivan/Getty Images)
SEATTLE, WA - SEPTEMBER 04: McDonald's shows fans that tailgating is an anytime, anywhere experience at the NFL season opener kickoff party on September 4, 2014 in Seattle, Washington. (Photo by Suzi Pratt/Getty Images for McDonald's)
NEW YORK, NY - JUNE 09: A McDonald's is seen on June 9, 2014 in New York City. McDonald's domestic sales rose slightly in May, but remain weak overall. (Photo by Andrew Burton/Getty Images)
STAMFORD, CT - APRIL 08: Activists protest for higher wages outside a McDonald's restaurant on April 8, 2014 in Stamford, Connecticut. Demonstrations were organized across the state by Connecticut Working Families to bring attention to minumum wages paid by fast food chains and Wal-Mart stores. (Photo by John Moore/Getty Images)
A customer walks away with her takeout meal at a McDonald's restaurant in south Los Angeles where fast-food workers and their supporters gathered to protest wage theft on April 3, 2014 in California. Fast-food workers were joined by elected officials, community allies and faith leaders to protest systemic and illegal labor abuses in the fast food industry, coming just days after a first-ever national poll of fast-food workers found that 89 percent of employees surveyed at companies like McDonalds, Burger King and Wendys reported having wages stolen from them. AFP PHOTO/Frederic J. BROWN (Photo credit should read FREDERIC J. BROWN/AFP/Getty Images)
A picture taken on January 22, 2014 in Paris, shows the logo of a US fast food restaurant Mac Donald's. Vice-president for finance of McDonald's France Alexis Bourdon reiterated in a statement to the press on January 22, 2014 that the American fast-food giant, suspected of trying to avoid paying taxes on 2.2 billion euros ($3 billion) of income from its 314 French eateries, 'pays all of its taxes' on the 'totality of its revenue', denying a report of French magazine L'Express. AFP PHOTO / KENZO TRIBOUILLARD (Photo credit should read KENZO TRIBOUILLARD/AFP/Getty Images)
Up Next

More from Grub Street:
McDonald’s Tests Smaller Big Macs, Which Kind of Defeats the Purpose of a Big Mac
Man Says Trader Joe’s Fired Him for Complaining About Penis Toy
How Social Media Has Made NYC’s Ice-Cream Scene More Innovative Than Ever