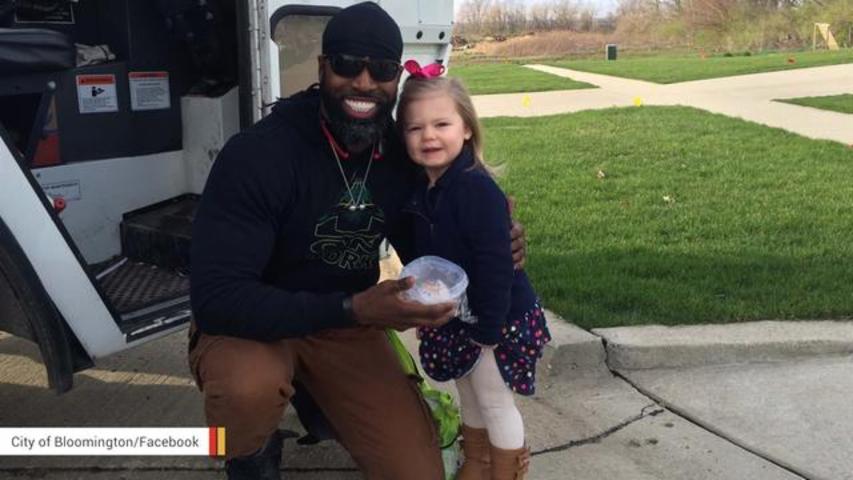 One precious little girl from Illinois wanted nothing more for her birthday than to meet the coolest guy ever -- her favorite garbage man, Delvar Dopson.

Little Brooklyn has been waving at her "favorite awesome smiley garbage man" every Thursday for the last year.

"My heart is full when I see the joy that our amazing garbage man brings Brooklyn when he honks and waves at her with a BIG smile," Brooklyn's mom, Traci Andracke, shared in a post on the Bloomington City Hall Facebook page.

Thank you to the resident that sent us the following comment! REALLY makes us smile!! We hope it makes the rest of you...

When Brooklyn's birthday rolled around she wanted to share a cupcake with her hero. She ran down to the corner when she saw his garbage truck coming, and signaled for him to come over and chat with her and her mom.

To the mom and daughter's delight, they discovered Dopson loves their Thursday exchanges just as much as they do.

"He explained that he looks forward to seeing us every Thursday as well. He said that he has a meeting every Thursday morning and always tries to get out of there in a hurry so that he can make sure to see us every week. He said he doesn't have any kids of his own, but he mentors several children and just loves them," said Andracke.

See more from this heartwarming story:

After chatting with Dopson, Brooklyn and her mom continued on to daycare. Brooklyn was unusually quiet and her mom asked if she was alright. "Mommy, I'm so happy," she responded.

And just when you thought this duo couldn't get any cuter -- Dopson came back a week later with some belated birthday presents for his little buddy.

Have you seen this viral story from here in Blono? Traci Andracke's daughter, Brooklyn, made a friend after she would...

If these unlikely best pals don't make you feel all warm and fuzzy inside, we don't know what will.