You have to try this recipe: Cobb salad sandwich

By: Taking on Magazines 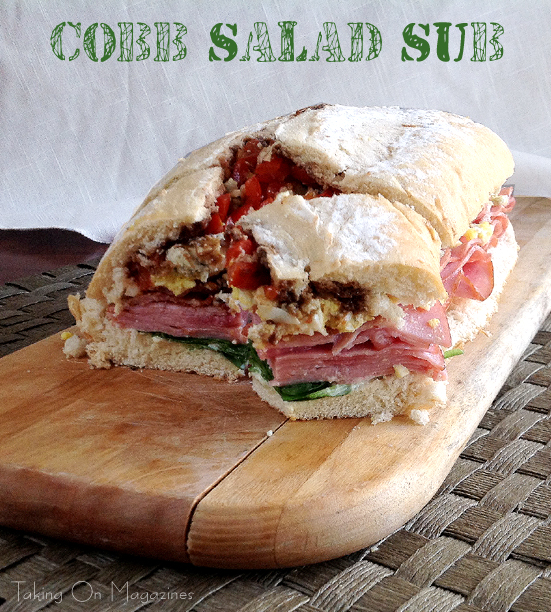 I would like to thank the person that looked at strips of meat sitting on top of lettuce and tomatoes and said, 'You know, that ain't right. Those fixin's belong in a sandwich, not on romaine.'

It's no secret that I'm not big into green salads as a meal. Sure, the family will gather around our grocery store's awesome salad bar on occasion, filling clear plastic containers with culinary masterpieces, then bringing them home for a familial graze of greenery around the supper table, but that's ... occasionally.

And, one thing you'll never see on my salad is meat. Yes, there's bacon on there, but ... if you're a purist or food snob, best turn away here for a moment ... I only use bacon bits. The fake kind in the plastic shaker bottle. They provide the pop of salt and crunch that balances the rabbit food on my plate.

So, imagine my delight when I saw that Ms. Grusendorf had submitted a recipe to Taste of Home that served up a salad between two hunks of bread. I gave this thing two thumbs up before I even tasted it.

All that's involved for this big ole' sandwich is a bunch of chopping, which isn't too hard to do. What is hard is the layering. It's a big sandwich. I suggest doing in reverse order, from the top, where all the little chopped up stuff is, to the bottom.

Simply hollow out a horizontally sliced Italian bread loaf, then lay the top, top-side down, on the counter so it creates a bowl. Brush on the dressing of choice, then layer the tomatoes, cheese, bacon, eggs, ham and spinach, in that order. Put the bottom on, flip the sandwich over and it's good to go. Some stuff will still fall out, but not near as much as when done the other way (trust me, I know).

What a fun, fast meal for a crazy weeknight. The sandwich was devoured. Not only did we have enough for supper, Doug and I wrapped up servings to take for lunch the next day (and day after). It was easy and it was delicious.

I did brush balsamic on the top slice of bread, but felt that it needed something creamy as well so I went with plain ole mayonnaise on the bottom.

What I'd Do Different Next Time --

See the original piece Cobb Salad Sub on Taking on Magazines along with more innovative recipes!