A dolphin park grows in the Arizona desert

WTH?! A Dolphin Park is Being Constructed in the Desert ... Take Action Now! #EmptyTheTankshttps://t.co/o5UdVHzjOYpic.twitter.com/sLOg4KJD2i

Animal welfare groups are trying to stop a swim-with-the-dolphins project being built in the Arizona desert, saying that the attraction will be harmful to the marine mammals and dangerous for patrons.

Located on Salt River Pima-Maricopa Indian Community tribal land near Scottsdale, the attraction appears to be owned by a Mexico-based firm named Dolphinaris, which operates several similar attractions in Mexico, and its parent corporation, Ventura Entertainment.

An employee of the construction company building the project, AR Mays, who asked not to be identified, said that the facility will house eight dolphins in a one-million-gallon tank and that visitors will be able to get into the water with the animals. He said the venue was slated to open in July.

"When we think about the idea of giant concrete pools filled with chlorinated water in the middle of the desert, it doesn't strike me a wise use of scarce water resources," said Courtney Vail, campaigns and programs manager at Whale and Dolphin Conservation, in email. "And it's as far from a natural environment for the dolphins as you can get."

RELATED: Take a Look Inside the Lives of Captive Dolphins

Opponents of the project first learned about it in January from an article on the Mexican news site SIPSE, as well as a cover story in Funworld Magazine, a publication of the International Association of Amusement Parks and Attractions. According to the Mexican article, the facility will cost $20 million.

Its location on Native American tribal land has left them with little recourse to fight the attraction.

"There is no accessibility to permitting and licensing documents and procedures that have occurred over the past two years," Vail said. "The public only became aware of this at the eleventh hour."

"All that's left is for the public to demonstrate and protest the development that is now under construction," Vail added. A petition against the project has so far received more than 3,000 signatures.

In a letter sent last week to tribal officials, the groups—including Whale and Dolphin Conservation, the Animal Welfare Institute, Earth Island Institute and Ric O'Barry's Dolphin Project—requested a meeting about the project with Salt River Pima-Maricopa Indian representatives. The officials haven't yet responded.

Blessing McAnlis-Vasquez, marketing project manager for the Salt River Pima-Maricopa Indian Community, told TakePart that the community does not comment on businesses that it does not own.

In January, Whale and Dolphin Conservation and other groups wrote to Dolphinaris and Ventura Entertainment in opposition to the Arizona attraction, calling it "a regressive step that ignores evolving public attitudes towards this practice," and highlighting potential health risks to humans taking part in captive-dolphin encounters.

"There are a number of bacteria found in dolphins that can cause illness in humans through inhalation or wound contamination," the letter stated, adding that participants have suffered broken bones, internal injuries, and serious wounds after being in close contact with the animals.

Some of those injuries, documented by Whale and Dolphin Conservation, have included a bruised sternum, broken arm, fractured rib and the biting off of a fingertip.

Dolphin-human encounters also put the animals at risk of increased stress, which can cause "weight loss, lack of appetite, anti-social behavior, reduced breeding success, stomach ulcers, and an increased susceptibility to disease and death" in dolphins, the letter said.

A public relations representative for Ventura Entertainment said that company officials were travelling and not immediately available for comment, while the law firm representing the project, Perkins Coie, did not return telephone inquiries.

A spokeswoman for the Scottsdale Visitors and Convention Bureau said she had no information on the project.

Tim Murphy, an executive at the Arizona-based Presidential Pools, which boasted on January 19 on its Facebook page that it was "proud to be building the main dolphin pool," responded in email that he was "out of town" and unavailable to comment. On March 31, the Facebook post was removed.

This dolphin is also an incredible artist: 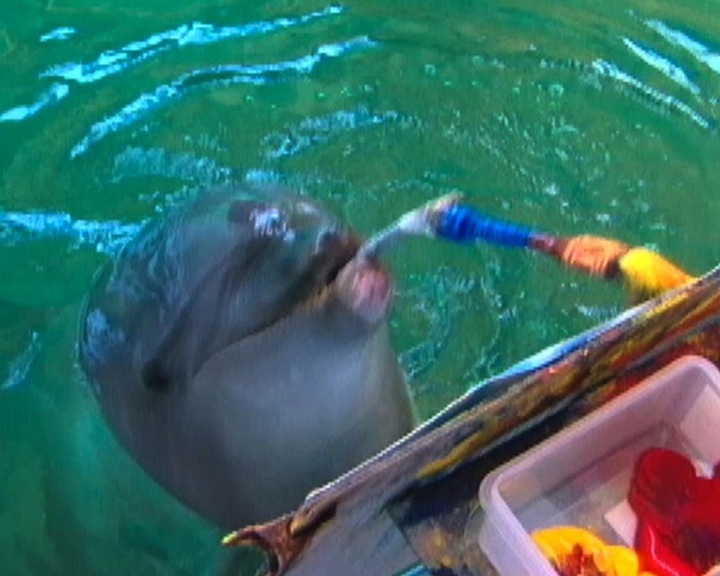 Send your Support: Save Orcas From Performing at California Marine Parks

Related stories on TakePart:
Whales and Dolphins Aren't the Only Victims of Marine Park Captivity
Lolita, the World's Loneliest Orca, Gets Endangered Species Protection
A Toxic Threat Is Killing Off Europe's Killer Whales and Dolphins