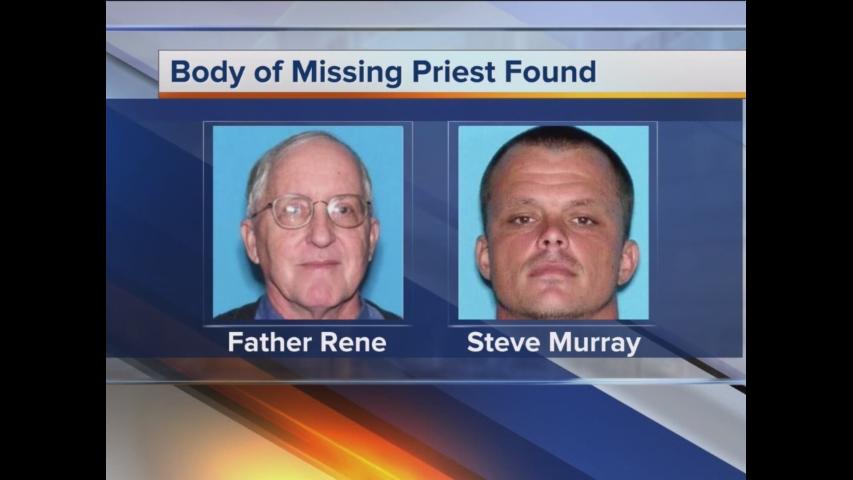 ATLANTA, April 19 (Reuters) - Law enforcement officials worked on Tuesday to identify what they believed to be the body of a priest who was kidnapped in Florida and found dead in Georgia.

The weeklong search for Father Rene Robert, 71, was called off Monday night after the suspect in the case helped investigators find a body in rural Burke County, Georgia, near the South Carolina border, Sheriff David Shoar of St. Johns County, Florida, said at a news conference.

SEE ALSO: TV crew saves castaway after spotting him on deserted island: 'He was ready to die'

Robert, a senior priest for the Diocese of St. Augustine in Florida, had been missing since April 10, the day authorities believe he was kidnapped, according to a statement from the sheriff on Facebook. Robert was reported missing on April 12.

Steven James Murray, 28, was driving Robert's Toyota Corolla when law enforcement tracked him to Aiken, South Carolina, and arrested him on April 13 on warrants unrelated to the current case, Shoar said.

Murray is being held without bond in Florida on a fugitive warrant but Shoar said he expects to charge Murray soon with kidnapping. Jail records did not list a lawyer for him.

Murray also will face homicide charges in Georgia, where the slaying is believed to have occurred, the sheriff said.

Police: Body of missing Florida priest found in Georgia
CLEVELAND, OH - MAY 7: In this handout provided by the Federal Bureau of Investigation (FBI), Georgina DeJesus poses for an undated photo. DeJesus was one of three women who believed to have been held captive for almost a decade in a home in Cleveland, Ohio. Amanda Berry, who went missing in 2003, Gina DeJesus, who went missing in 2004, and Michelle Knight, who went missing in 2002, managed to escape their captors on May 6, 2013. Three suspects, all brothers, were taken into custody. (Photo by FBI via Getty Images)
CLEVELAND, OH - AUGUST 7: Demoliton crews clean up the remains of Ariel Castro's home after it was torn down on August 7, 2013 in Cleveland, Ohio. The State of Ohio leveled Castro's home less than one week after Castro was sentenced to life in prison with no parole plus one thousand years for abducting three young women between 2002 and 2004. The women escaped this past May. (Photo by Angelo Merendino/Getty Images)
CLEVELAND, OH - AUGUST 1: Michelle Knight waits to address the court during the trial of Ariel Castro on August 1, 2013 in Cleveland, Ohio. Knight was abducted, along with Amanda Berry and Gina DeJesus, by Castro and held captive for 11 years. (Photo by Angelo Merendino/Getty Images)
CLEVELAND, OH - AUGUST 1: Ariel Castro pleads to Judge Michael Russo during his sentencing on August 1, 2013 in Cleveland, Ohio. Castro se,ntenced to life without parole plus one thousand years for abducting three women between 2002 and 2004 when they were between 14 and 21 years old. Castro told Judge Michael Russo, "I'm not a monster, I'm sick...I'm a happy person inside." (Photo by Angelo Merendino/Getty Images)
CLEVELAND, OHIO - MAY 10: Amanda Berry was believed to have been kidnapped by Ariel Castro in April of 2003 from this Burger King where she worked. Information is still surfacing regarding the decade-long saga of three kidnapped Cleveland women and their amazing rescue. Photo by Michael S. Williamson/The Washington Post via Getty Images
Up Next

Officials did not discuss a motive. Shoar said Robert appeared to have met Murray through a ministry in Florida where the priest helped former inmates find work.

"I know Father Rene was one of the better angels," Shoar said during the news conference.

Agent Scott Dutton of the Georgia Bureau of Investigation said in a phone interview that the agency will conduct an autopsy of the body in Atlanta as soon as Wednesday to identify the victim and determine the cause of death. (Editing by Colleen Jenkins and Bill Trott)