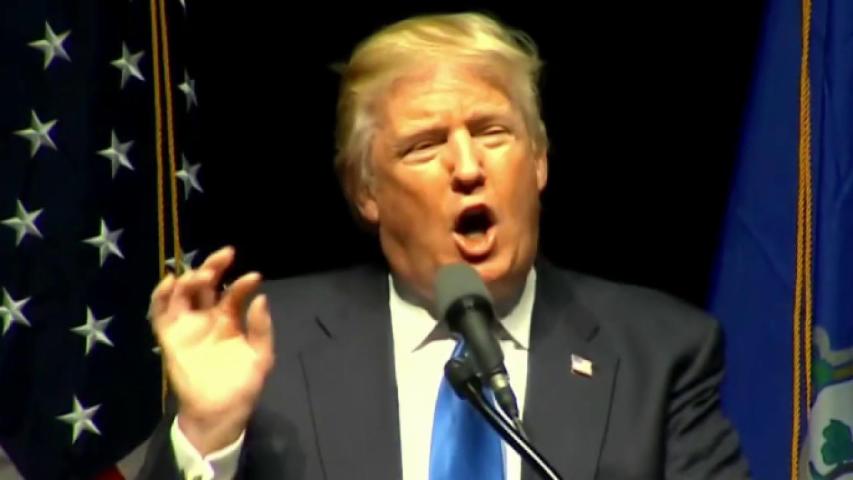 Donald Trump, the candidate of bombast, braggadocio, and personal attacks, was suddenly subdued.

He stood before a hometown crowd in Manhattan's Grand Hyatt hotel. He never mentioned his chief rival, Sen. Ted Cruz, by name, instead extolling him for extolling the "New York values" he casually dismissed in a January debate.

And he talked about how those "New York values" are central to the theme of his campaign.

SEE ALSO: Donald Trump is trying out a new moniker for Hillary Clinton

"In our darkest moments as a city, we showed the world the very, very best in terms of bravery, heart and soul of America," Trump said, in reference to the September 11, 2001, terror attacks on US soil.

"These are the values we need to make America great again."

Trump is solidifying his position with just days to go until the consequential New York primary, as the GOP frontrunner is set up to romp through the state.

See what happened when protesters and supporters clashed at a recent Trump rally:

With the delegate-rich state of New York set to hold its primary on Tuesday, Trump holds a monumental, near-32 point lead in the RealClearPolitics average of several polls.

For Trump, New York could hardly be more important coming off a double-digit loss to Cruz in Wisconsin's primary earlier this month.

So far in polls, Trump has maintained above a 50% level of support there — key to securing the treasure trove of delegates the Empire State provides.

He added that "everything stayed the status quo" in the New York GOP primary race during the past week.

"He was going to win New York, so any claims that the momentum was shifting one way or the other just really aren't there," Siegfried said. "The people who are against Trump and for Trump have not really seen much movement either way."

Trump's even fared well in an area where he has rarely seen success along the campaign trail — with endorsements of local publications.

This week, Trump received the endorsement of both the New York Post and the New York Observer. (Trump's son-in-law, Jared Kushner, is the Observer's publisher.) The New York Daily News, another major local publication, endorsed Kasich, who's spent increased time railing on both Trump and Cruz as he campaigns throughout the state.

Despite Trump's strong numbers and wide array of support, Siegfried said there are Republicans in New York who don't like Trump. However, they feel no love toward Cruz, Trump's main competitor nationally.

Polls have shown that Cruz has failed to consolidate the anti-Trump support. A Wall Street Journal/NBC New York poll released Friday afternoon found Cruz in third place with just 16% support. Kasich appears to have vaulted into the clear second-place slot behind Trump.

Cruz's standing in New York was evident during his speech at Thursday night's New York GOP gala, where he was practically ignored.

"They do not feel any love toward Ted Cruz because of his 'New York values' comment," Siegfried said. "That really damaged him with people here."

But New York Republicans have been cold toward Cruz long before that remark in a January debate that nevertheless continues to follow Cruz on the campaign trail.

Cruz voted against aid for victims of Hurricane Sandy, and he also opposed a 9/11 health bill for first responders.

"He stood against both," Siegfried said. "And that effort, every New York Republican came out in favor of both. Ted Cruz stood in the way of both. That's what really burned him. He can go around and say New York Values and could be talking about liberalism, but with New York Republicans, that's not a defense of Ted Cruz's record when it comes to New York."