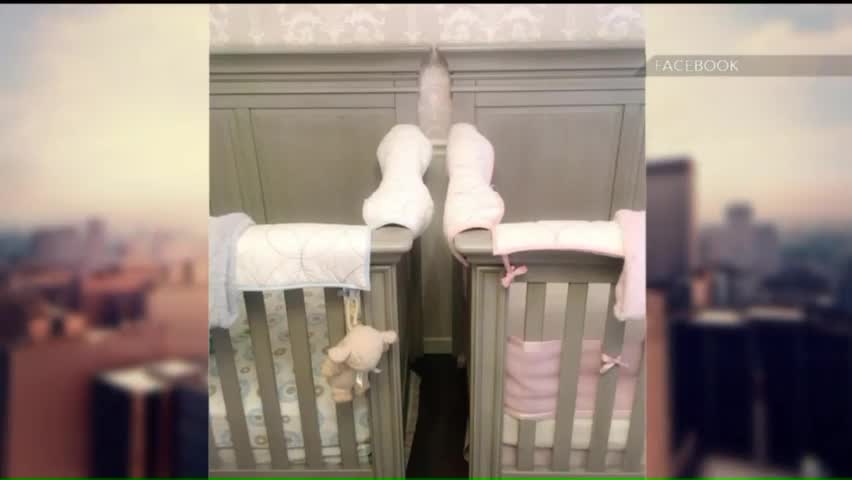 A mom of twins took to Facebook this week to share a crib story much more terrifying than any possessed toddler ever could hope to be.

"I'll never forget the image of him there," Alison Johnson said of a scene that played out a week ago after she put her 18-month-old son down for a nap.

A few minutes later, she heard him crying.

She went to check on him, never imagining what she would see. Caleb had climbed out of his crib, and had landed himself in a precarious situation.

"He was between the two cribs, using his little arms to hold himself up and if his arms had given out his head wouldn't have fit between the slots," Johnson said in her post.

Caleb would have been hanging there — by his head — had Johnson not reacted quickly. She's since moved the cribs further apart and lowered Caleb's mattress.

Wanting to help other parents avoid potentially tragic situations, Johnson posted her story on Facebook as a cautionary tale.

I have a lot of friends that have twins or kids close in age that may have a similar set up, so I wanted to share...

"It's really hard to think about," Johnson told KPHO. "It was pretty traumatizing, the whole thing."

A twin herself, Johnson said she never saw anything dangerous about putting her twins' cribs next to each other.

"I wanted that for the bonding," she explained. "I wanted them to be in the same room, to be next to each other and share those memories."

"I'm thankful we shared this story because I'm totally confident that we've saved a life by it," Johnson said.

More from AOL.com:
Meet the chicest twins in the entertainment industry
These identical twins pulled off the best face swap of all time ... or did they?
This guy's great-great-grandfather is basically Matthew McConaughey's twin